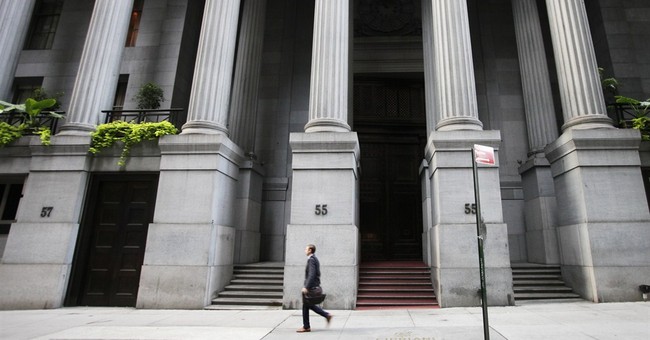 Even with stocks trading near record highs, equities remain the best bet for the ordinary investor. Stocks could easily jump another 25 percent before the bull market is done.

The average price earnings ratio for the S&P 500, which accounts for about 80 percent of publicly traded companies in the United States, is about 19.7. That is a bit above the 18.90 average for the past 25 years but hardly overpriced if we consider how efficiently corporations use capital to create value these days.

Google was established with initial funding of only $25 million and in six short years became a global company worth $23 billion.

In the digital age, software can be used to create whole new industries—like e-commerce and social networks—or to improve existing products and services at much lower cost than by simply adding buildings and equipment as was required during the machine age.

That’s why U.S. corporations are flush with billions in extra cash—they don’t lack for new opportunities to earn profits but need less money to do so. Hence, they use that extra capital to buy back stock and along with individual investors, bid up prices for young companies like Uber that exploit new concepts.

The abundance of capital pushes up the value of stocks and pushes down interest rates on corporate and government debt, and these are structural changes, not something created by policymakers, that are not likely to abate.

In October, the Federal Reserve ended quantitative easing—its purchases of long term Treasury and mortgage backed securities—but instead of pushing up interest rates on Treasurys, as expected, those are down from a year ago.

With European and Asian economies weakening, the rush of foreign investors into dollar denominated investments further boosts U.S. stocks and pushes down bond yields. And that trend will likely moderate the downward pressure on equity prices when the Fed starts raising short term interest rates this summer.

Higher home values, a better jobs market and lower gas prices put consumers in their strongest position in nearly a decade, and they are poised to drive stronger GDP growth in 2015—and even more profits for U.S. businesses.

Wrapped altogether, stocks may not gain 12 percent as they did in 2014 but 7 to 8 percent annual price increases seem likely over the next three years.

That would take the S&P 500 to about 2600. Factoring in accompanying growth in profits, the index’s P/E ratio would still be well below 25—the level it hit when the index first pierced 1000 in 1998.

The collapse of oil prices has hit energy stocks hard, and professional money managers will be looking for bargains among smaller oil producers. For example, those not heavily indebted and who can reign in drilling and production costs.

Also, now may be a good time for professional investors to look at some of the stronger Japanese and European companies and banks whose stock prices will rebound when the yen and euro strengthen again.

Picking winners among companies and currencies is too complex for ordinary investors—they simply don’t have the time and information needed to make good bets.

My basic advice remains. Each month, aim to put about 10 percent of your income in an S&P 500 index fund—such as the one offered by USAA or a similar low cost service.

Many U.S. firms quite effectively profit from developments abroad but if you wish further international diversification, put about 20 percent of your portfolio in the Vanguard Total International Stock Index Fund, which tracks non-U.S. equities, or a similar vehicle fund at another low cost service.

For the last forty years, that’s how my wife and I invested most of our money, and we are well prepared to retire and travel—but we like doing these columns too much to quit.

Peter Morici is an economist and business professor at the University of Maryland and a national columnist. He tweets @pmorici1