D-Day Legacy – They Expect Much of Us

Perry Gershon
|
Posted: Jun 06, 2019 12:01 AM
Share   Tweet
The opinions expressed by columnists are their own and do not necessarily represent the views of Townhall.com. 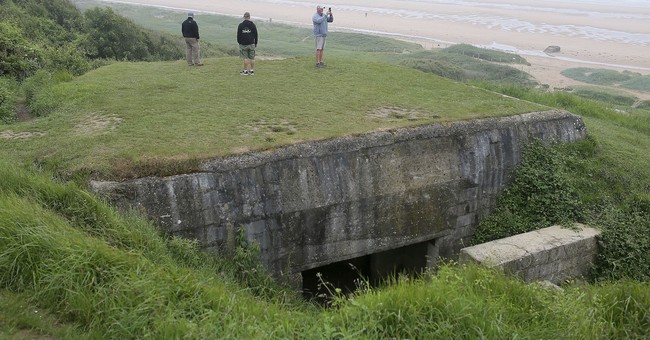 Americans reflect this week on the courage and sacrifice of more than 70,000 young Americans who – 75 years ago – stormed the gun-studded cliffs of Normandy, Omaha and Utah, to rescue a continent and save freedom, democracy and humanity.  The day was June 6, 1944, rough water, open sand, enormous cliffs, unbroken machinegun fire, an epic battle – for freedom.  Those who survived are now in their 90’s.  This is the moment to make the effort – to thank them and process the fact that they expect much of us.

That Allied assault, called “Operation Overlord,” was objectively epic – enormous in size, significance and tragic cost.  On the beaches of Normandy France, these American boys demonstrated profound resolve, faith, military commitment and patriotism.  What lifted them up and kept them going was love of country, town, family and freedom.  To a one, they risked all for us.

History books make it look inevitable.  It was not.  The fight called for everything they had, and thousands gave it in the form of their lives. But had they not done so, the freedom and prosperity we take for granted today would not be ours.  If by some stretch America had survived and endured at all, we would be an island in an ocean of unthinkable darkness.

These boys were under no illusions.  They knew that the fight was all or nothing, win or freedom perishes, prevail against the evil that had taken Europe, or allow something to stand that could not.  Steeled to the task, they met the gunfire with a determination to win.

That battle – which Nazis thought they could halt on the beach – is what later made freeing Europe possible.  The human cost was enormous – in losses on that day, in the unable-to-be-forgotten memories and horrors experienced and carried forward, many of which lasted a lifetime for those who were there.

Beyond words, photos of Omaha beach are hard to see.   On Omaha, after that one epic day, nearly 1,500 American boys lay dead, in excess of 3,000 were seriously wounded, another 2,000 forever missing and 26 captured.  The mayhem was horrific, but it changed everything.  From that moment forward, the Germans were in retreat.

All did not end that day.  The Nazi war machine would try again, in a final death throw known as Battle of the Bulge, but the Normandy invasion turned the page, put the power of a moral alliance that would not quit in the heart of France, and evil was in retreat – until the Allied armies crushed it.  All that arguably began, 75 years ago this week.

Trying to understand the enormity of this event, photographs help.  One that I catches me off guard each time is not from the war zone, but from New York City itself.  It is the highly human reactions, tension on faces, worried hearts you can almost hear beating among Americans – knowing what is happening – as they look up at news rolling above them in Times Square.

By the time New Yorkers soaked up that news, tens of thousands of boys were confronting the Nazis head on, bravely running into a hail of mortars, artillery and machine gun fire at Normandy, climbing 200 foot sheer cliffs, and driving back those who were sworn to stop them.

From 75 years on, it remains hard to imagine, but there was nothing inevitable about the D-Day victory, or eventual success in Europe or the Pacific.  Only heart, soul, undying courage and unthinkable resolve to prevail – made it happen.

And that is what we should remember on this 75-year anniversary of that epic day. We should look back with the kind of appreciation that brings a good heart to silence, in sheer awe of what those boys – teenagers – did for us.

We should look forward with the resolve in our hearts to preserve, protect and deliver forward the freedom they have given us.   We owe that to them, and more than that.

We should also look around us and see if there are not ways we can honor them by being more like them, getting along more respectfully with each other, facing challenges as one nation, and remembering what those boys faced that one day makes easy any challenge we face today.

This week, we will celebrate their courage and sacrifice.  Understanding what they did for us back then is sobering.  Understanding what they might want us to do now – with the freedom they gave us, honor they paid us, and expectations set for us– is the challenge before us.  This is the time to reach out, while we have them among us.  This is the moment to thank them – and remember, they still expect much of us.

Perry Gershon is a widely recognized business leader and national commentator on business, trade, policy and politics. A congressional candidate for New York’s first district, he holds a B.A. from Yale and an M.B.A. from the Univ. of California.