A Boring Debate and a Proposal for 2012 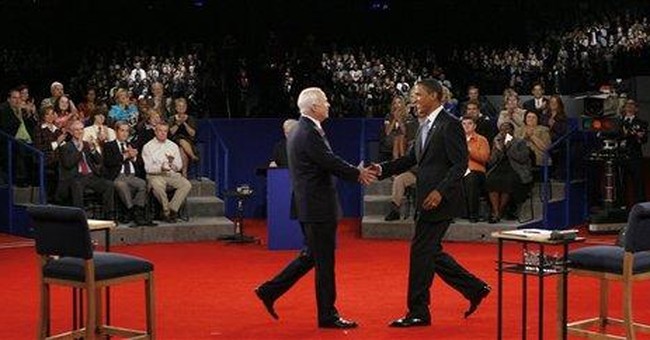 One radio listener dubbed the second Presidential debate as a contest between the Fresh Prince of Bel Air and Fred Mertz. Talk about boring. I had a difficult time keeping awake. Most pundits claimed the win for Senator Barack Hussein Obama. But many focus groups thought Senator John Sidney McCain, III had the edge. It was clear it was not a game changer. Many undecided voters said they still were undecided after the debate. This townhall format was supposed to benefit McCain but Obama looked just as comfortable as McCain. In reality it was not really a townhall format because moderator Tom Brokaw not only selected all questioners but also selected six e-mail questions from among thousands submitted. Interestingly, there was not a single question about character. The Obama campaign had suggested earlier in the week that it did not welcome that line of questioning. Good old Brokaw took care of Obama. I can't believe that among the eighty questioners in the room and the thousands who sent e-mails not one asked a question about character.

McCain did get in a few zingers but I could not figure out what he was talking about in a couple of them. Obama was in command of the subject matter he chose to address. The problem was the questions not included. Going into this townhall meeting Obama led McCain by anywhere from four to eight percent. If McCain were to turn things around he would have had to win the debate to the point that he would have moved two or three points closer to Obama. The polls over the next few days will indicate whether McCain was successful. There is a final debate on October 16. To reverse a downward trend at that point would be a greater burden than any candidate could bear.

When both McCain and Obama had secured enough votes to be nominated but weeks before the conventions formally nominated them, McCain proposed a series of ten townhall meetings from one end of the country to the other. Obama had said he would meet McCain any time at any place. Yet he rejected McCain's proposal. That is a pity. There is so much we do not know about either of these candidates or their policies.

The Presidential Debate Commission is self-constituted. Most people believe it has some official standing. Looking forward to the 2012 Presidential campaign, the Commission should require both candidates, whoever they may be, to agree to a series of debates and townhall meetings. Both candidates would have to agree to campaign together from one end of the country to the other. Debating one another in various formats would consume the majority of campaign time until the election. Just think of the enthusiasm that idea would generate for our Presidential political process. By the end of the series we would know the candidates and they would have had ample time to discuss all issues. What I have in mind would not be to limit answers to two and a half minutes. Rather, the candidates would have adequate time to expand upon their proposals.

If you like my idea, why not contact the Presidential Debate Commission? If enough people support the idea in their own words the Commission may be inclined to listen to the public. Can you imagine how much better off we would be if we had that format?