Kobe Bryant, a Voice of Patriotism and Appreciation 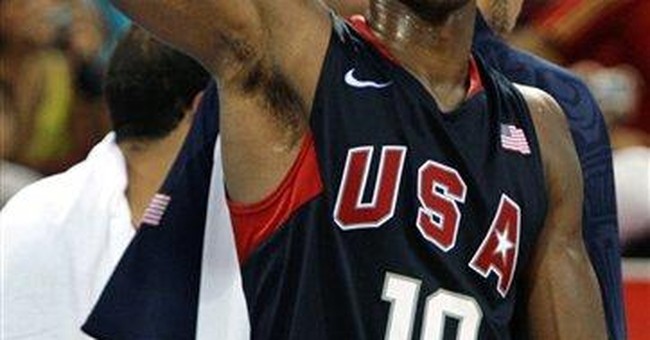 Is patriotism a thing of the past or is it still kosher to take pride in America? That question was put to basketball great Kobe Bryant at the Summer Olympics in Beijing, China. Sportscaster Cris Collinsworth asked Bryant why he would give up his summer to play with the American Olympic team when he could be earning big bucks at home. Bryant said that when he got the Olympics uniform he spread it out on his bed and gazed at it for a long time. Bryant said, "Our country, we believe, is the greatest county in the world and it's given us so many great opportunities and it's just this sense of pride that you have, that you say, you know what, our country is the best."

Collinsworth was not expecting that sort of comment. Taken aback, he asked Bryant if such pride isn't a relic of a bygone era. "Is it still cool to talk about fighting for the red, white and blue?" Bryant didn't care for the question. He replied, "No, that's the cool thing for me to say. I feel great about it and I'm not ashamed to say it. This is a tremendous honor. You look at our troops overseas who are fighting for our country..." His voice trailed off.

There you have it. The NBC sportscaster was confounded by someone so successful yet so down to earth and patriotic. That is incomprehensible to those who think America is to blame for much of the evil in the world. Despite his success, Bryant is grateful. He has traveled elsewhere in the world. He has seen conditions abroad that he knows have little hope. Interestingly, when he was introduced at the Olympics he received a thunderous welcome, far greater than that received by most Chinese athletes.

What Bryant said is true. I often talk about it with my cousin Kathy. My father and his brother, Kathy's father, came to America to escape the hopelessness of post-World War I Germany. Both of us have had opportunities here that we never would have had if we had been born in the old country. Both fathers were blue-collar workers. But they knew that their offspring could achieve.

One rarely finds the unpatriotic hate-America-crowd among first-generation citizens. No, it is from among those whose parents were native, who gave their children everything they wanted and who never inculcated a sense of gratitude for the privileges we have here.

This is not to say we find perfection here. There is always room for improvement. Yet those who hate America lack the gratitude of what it has given them. They have been instilled with a sense of entitlement, not gratitude. If one feels entitled to perfection on earth one will be dissatisfied perpetually when reality falls short. This is not to say that we should not strive toward a better society. But human nature being what it is, there always will be imperfection.

I'm with Bryant. He says it well. Only someone who has attained his level of athletic perfection can put a Collingsworth in his place. I often have hoped that more stars would speak out as he did. I hope his interview will be repeated. Perhaps it will jolt a sense of reality in some of those who think America is always the problem.