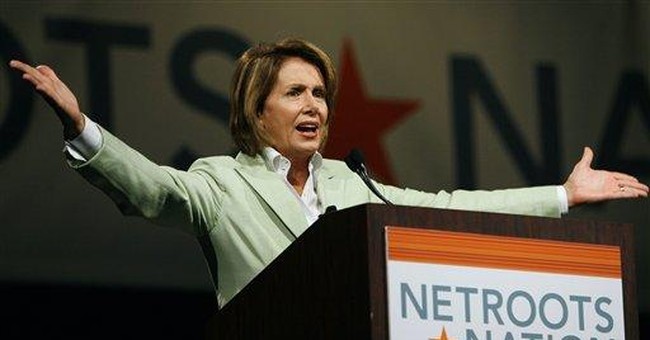 I have been feeling rather blue. Those who know me know that I never give up without a fight. My problem is with the so-called "Fairness Doctrine," which represents the opposite of fairness. Talk Radio, as we now know it, represents one of the very few weapons in the conservative media arsenal. 630 WMAL's brilliant commentator, Chris Plante, has declared that 2008 is the year that true journalism died in the United States of America. I agree with him. The national media overwhelmingly supports Senator Barack H. Obama (D-IL), the presumed Democratic nominee, for President. How can he lose with the national media all but carrying his bags as he goes abroad? With the exception of Fox News Channel the television media is all in the hands of the left. Fox itself is more Republican than conservative. The left also controls nearly all of the print media.

So I reviewed conservative options for the next Congress. Speaker of the House Nancy Pelosi (D-CA) and Senate Majority Leader Harry M. Reid (D-NV) have two ways to achieve their objective, which is to pass the Fairness Doctrine. First, they can deny opponents the opportunity for an up-or-down vote (which they have done in the present Congress). They do so because they correctly fear that anti-Fairness Doctrine Members would prevail. Test votes have so indicated. Second, they could wait for the Democrats to win complete control of the Federal Communications Commission (FCC) and then let it reinstate the doctrine. It took President Ronald W. Reagan seven years to accomplish de-regulation. Rush Limbaugh launched nationally in 1988. My guess is that the Democratic Leadership will not want to wait that long, lest opposition grow throughout the country.

I did not see a way out of this situation until I interviewed Senate Republican Leader Mitch McConnell (R-KY) last week on the "Right Hour" program on the Right Talk Radio Network. McConnell pointed to the record of the Supreme Court under Chief Justice John G. Roberts, Jr. In ruling after ruling the Court is suspicious of any legislation which tries to limit political free speech and our First Amendment rights. McConnell has been the plaintiff in the most important cases before the Court. He believes that with a few more rulings and McCain-Feingold Campaign Finance Reform will belong to the ashbin of history.

I had not considered the Supreme Court's role in the Fairness Doctrine. There is little doubt that if the Fairness Doctrine is re-instated by Congress it immediately will attract many free-speech lawsuits. Seldom is it that a United States Senator says anything to cheer me up. Congratulations, Mitch McConnell. You managed to just do that.