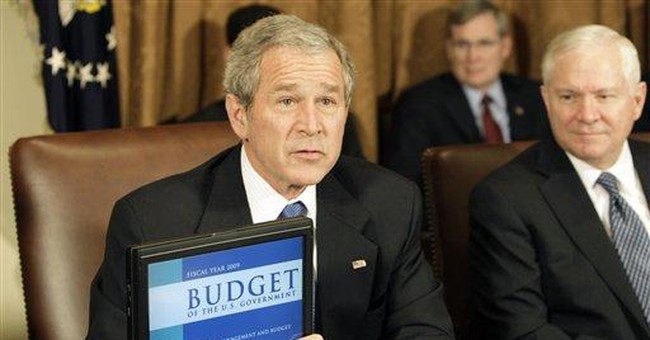 Last Thursday I noted in this column that President George W. Bush had finally “acknowledge[d] the corruption and fiscal irresponsibility of the earmark process” when he signed an executive order “directing Federal agencies to ignore any future earmarks included in report language, although not in the actual text of appropriations legislation, which is generally how earmarks receive their designation.” It seemed as though President Bush finally had realized the value of fiscal restraint.

On Monday, February 4, President Bush released his budget proposal for Fiscal Year 2009, which begins October 1, 2008. The $3.1 trillion budget proposal, the first time in history the Federal Government will spend more than $3 trillion in a 12-month period, is a disappointment for those who thought fiscal restraint would prevail. The budget proposal does contain some positive features but also would increase the deficit significantly.

Among the praiseworthy features of the proposal are plans to eliminate 151 government programs, 47 of which are in education, to save $196 billion over five years in Social Security, Medicaid and Medicare, and to extend his tax cuts through 2013. (Currently they are scheduled to expire in 2011.)

Yet even with the reduction in spending for entitlement programs, particularly Social Security and Medicare, spending is projected to rise 6% overall in 2009 as more “Baby Boomers” retire. Nor does the proposal account for the cost to fix the Alternative Minimum Tax (AMT) past 2009. AMT, a parallel tax system enacted in 1969 to ensure that the wealthy paid income tax, increasingly affects middle-class families, many of whom are suffering under its onerous code. Instead of aggressively pursuing the permanent elimination of AMT, Bush includes the cost of a fix for 2009. After that, however, the Congressional Budget Office estimates that fixing AMT in 2012 would cost $118 billion. American taxpayers safely can assume that it will become increasingly more difficult to eliminate this unfair tax as the loss of revenue to the Federal Government increases. Therefore, President Bush should act now to abolish AMT permanently instead of incorporating a one-year AMT fix into the budget.

Additionally, Bush’s proposal includes only $70 billion for the wars in Iraq and Afghanistan for FY 2009 and no money after that. Costs for the wars may reach $200 billion next year and likely will continue past FY 2009. This oversight, whether or not intentional, means that Bush’s assumed deficit of $407 billion for FY 2009 will be much higher.

The projected deficit is significantly higher than the $162 billion incurred last year. In addition to military spending, the increase can be explained by the $145 billion stimulus package of tax refunds for individuals and businesses which Congress is expected to pass soon in order to combat the looming recession. What President Bush and Congress must learn is that for every tax cut they enact an equivalent spending cut should be made concurrently.

What President Bush’s FY 2009 budget proposal reveals is that many of our elected politicians fail to understand the consequences of profligate spending. The American economy potentially is facing a recession in large measure because too many Americans sought to live beyond their means through deficit spending. The same is true of the downturn in the housing market and the disaster in the subprime mortgage market. The Federal Government will face greater challenges in the years to come as more Baby Boomers retire, straining the already overburdened Social Security and Medicare programs, and as the middle class suffers under increased tax burdens. As with every American citizen, the Federal Government must bring its spending under control while permanently reducing (and perhaps simplifying) taxes. Living within one’s means is not easy and sometimes it is painful to make the necessary cuts but for the sake of the American economy, both short-term and long-term, President Bush and Congress must begin to make such cuts instead of increasing the deficit as usual.