A Tale of Two Inaugurals 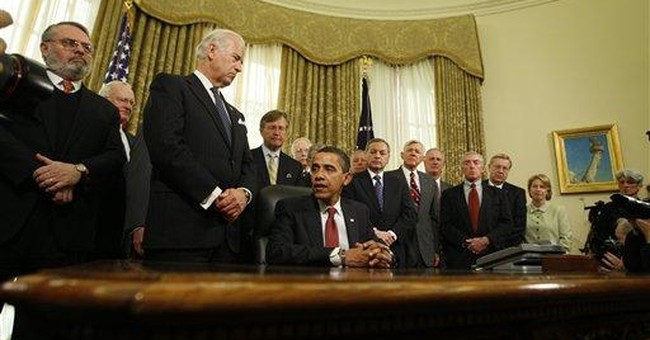 Watching the inauguration of President Barack Obama, I was impressed by the graciousness and civility by the two presidents at the platform during the transition. To tepid applause, Obama began his Inaugural Address by thanking George W. Bush for his service. As the camera panned to Bush, the 43rd president seemed non-responsive, sad.

After the ceremony, the Obamas and Bushes slowly descended the Capitol steps together, almost arm in arm—two presidents and two first ladies, two couples, four Americans, four people. They chatted quietly, amicably. The Obamas escorted the Bushes to the helicopter. They hugged, shook hands, George Bush gave Michelle Obama a kiss on the cheek. The helicopter flew away.

I watched this on MSNBC. It was all so moving that it threw me for a loop when, as the Bush helicopter gradually disappeared from sight, the camera fixed on an Obama supporter carrying a giant sign that read: “BUSH GO TO HELL.” (I’ve since learned that such rude gestures were more common than I had realized, including the crowd chanting at Bush, “na na na na … hey, hey, hey, goodbye. Click here.)

My mind immediately raced back to the inauguration of George W. Bush in January 2000. On that other January day, Bush used his Inaugural Address as an opportunity to call for unity after the terribly divisive 2000 presidential election. “Unity,” he said shortly into his speech, “is within our reach, because we are guided by a power larger than ourselves, Who creates us equal in His image.” He spoke of the need for compassion, character—and civility.

He defined compassion as the work of a nation. He interjected one of his favorite Biblical stories—the account of the Good Samaritan. He made a “pledge” in those first presidential minutes: “When we see that wounded traveler on the road to Jericho, we will not pass to the other side.” Though no one could have foreseen it, Bush would later (April 2003) invoke that same parable in explaining to a shocked White House press corps why he was about to take the unprecedented step of spending $15 billion on African AIDS relief in a period of record budget deficits and amid a major war in Iraq—and with tens of billions more yet to follow.

The benediction at the 2000 inauguration was done by Rev. Kirbyjon Caldwell of the Windsor Village United Methodist Church, an African-American congregation in Houston that Bush addressed as governor. Caldwell, who described himself as politically independent but a “spiritual supporter” of Bush, urged forgiveness: “Almighty God, the supply and supplier of peace, prudent policy, and non-partisanship, we bless your holy and righteous name. Thank you, O God, for blessing us with forgiveness.”

Yet, while unity and forgiveness, and compassion and civility, were themes for President Bush that January day in 2000, not everyone seemed in the mood—or quite so willing.

Near the inaugural grandstand, angrily enduring the spattering cold rain, anti-Bush activists floated black balloons and hoisted placards with phrases like “Dubious George,” “Hail to the Thief,” and “Bushwhacked by the Supremes.” One of the dissenters, Shelly Levine of Washington, DC, braved the weather to instruct a reporter: “Let Bush see that more than half the people here don’t believe in him.”

The new president got in his new car and began heading to the White House along the inaugural parade route. As the first car in his presidential motorcade moved down Constitution Avenue, it was greeted by a flame engulfing an American flag. The woman who ignited the fire was whisked away by Capitol police. Just then, an enraged demonstrator dove from a light pole into the crowd below.

A few blocks away, near 14th and K streets, protesters blocked the route down Pennsylvania Avenue. Jed Dodd, a union organizer from Philadelphia, complained of the new president: “I don’t even think he won Florida. I came down here to show my outrage.”

Similar demonstrations took place all over the country, from New York to San Francisco, from Chicago to Seattle. Closer to my home, a group of 100 in Pittsburgh paused for a moment of silence “for the death of democracy” at the moment Bush placed his hand on the Bible. He was dubbed “King George” and “President Death.” “The presidency is in the process of being stolen,” explained one organizer, Jeanne K. Clark, president of the local chapter of the National Organization for Women.

That was the reaction to the inauguration of George W. Bush in January 2000. The response was very different for Barack Obama in January 2008.

George W. Bush’s foes should ponder the graciousness and civility before them at the inaugural grandstand on Tuesday—from both the president they elected and the one they despised.