Paul Jacob
|
Posted: Mar 31, 2019 12:01 AM
Share   Tweet
The opinions expressed by columnists are their own and do not necessarily represent the views of Townhall.com. 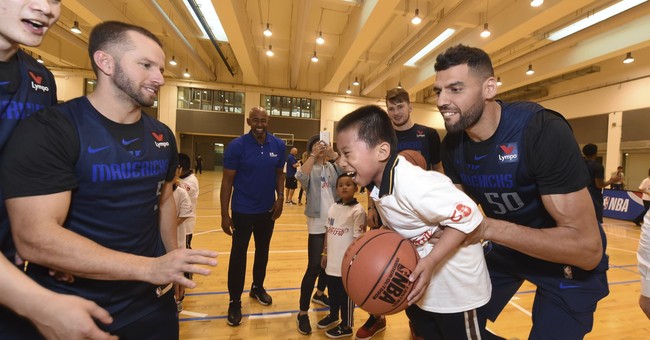 Special Olympics has found a way to get kids and young adults with disabilities to feel something enormously important: Able.

Three decades ago, as part of a community service requirement, I spent one day each week working with physically and intellectually-challenged adults at Easter Seals in Little Rock, Arkansas, organizing sporting events and speech and drama activities.

And I loved it.

Most unforgettable were the beaming smiles of pride when they got a chance to show what they could do — the pinnacle of which was their participation in Special Olympics. I’ve always loved sports, but never as much as at those wonderful games.

In the decades since, my family has regularly given to the Special Olympics what financial support we could afford. And helping in our small way to spread an awesome amount of joy always feels great.

Can you imagine how I must have felt, then, hearing U.S. Secretary of Education Betsy DeVos, a billionaire, testify in favor of cutting all $17.6 million in federal funding for the Special Olympics last week?

“The Special Olympics is . . . a private organization. I love its work, and I have personally supported its mission,” countered Sec. DeVos. “But given our current budget realities, the federal government cannot fund every worthy program, particularly ones that enjoy robust support from private donations.”

In fact, federal funding provides only about 10 percent of total revenue for Special Olympics, which does indeed raise more than $100 million annually in private donations from people such as you and me.

Under further grilling by Sen. Dick Durbin (D-Ill.), DeVos reiterated that, “You know . . . I have given a portion of my salary to Special Olympics,” adding, “I hope all of this debate encourages lots of private contributions to Special Olympics.”

And then she lit into Sen. Durbin, “So let’s not use disabled children in a twisted way for your political narrative. That’s just disgusting and it’s shameful.”

In the exchange between DeVos and Durbin, however, a truth tumbled out into view. Asked if this funding cut had been her idea, Mrs. DeVos made clear it was not. She had merely been the messenger, i.e. the whipping-girl, for what was quite obviously a politically untenable position taken by someone else in the administration.

That’s when our buck-stops-somewhere-else president ended the controversy by announcing he had “overridden my people” to save the day for truth and justice by making sure the money spigot remains at full flow.

But let’s return to the kerfuffle long enough now to answer my initial question: how did I personally feel about the wealthy DeVos suggesting — or at least, publicly defending — a $17.6 million cut to Special Olympics funding?

Grateful . . . for her extremely generous contributions to Special Olympics — one of four charities to which she donated her entire 2017 federal salary. I admire people who give their own money to charity more than those who demand to “give” other people’s money.

Lots of real people have experienced real benefit due to the generosity of Sec. DeVos and her family, which is reportedly the 88th wealthiest in the country. But in this day and age when “billionaire” is a bad word, let’s also note that Forbes’s wealth rankings also give Mrs. DeVos’s father-in-law, Richard DeVos — who co-founded Amway Corporation — the highest score for being self-made.

And I’m thankful for Betsy DeVos’s sense of fiscal responsibility. Or somebody’s sense. Government should not do for people what they can do for themselves.

Let’s fund this wonderful program ourselves, without the government forcing (taxing) one cent from others.

Check, cash or credit card is always preferable to mere signals of virtue, the gum-flapping of politicians.