Paul Jacob
|
Posted: Dec 30, 2018 12:01 AM
Share   Tweet
The opinions expressed by columnists are their own and do not necessarily represent the views of Townhall.com. 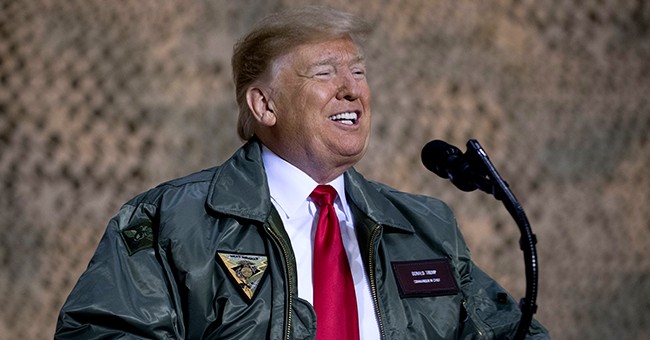 If this column were so much cable TV noise, one would assume I’m about to lambaste President Donald Trump for his tone, his temperament, his temerity — not to mention his tall tales. But no. Apparently, Trump Derangement Syndrome is the one mental ailment I lack.

And attempted boss rule by the Donald is tenaciously checked by a virulently anti-Trump political and media establishment. Not to mention the deep state. And the Democrats in Congress.

And come to think of it, the Republicans in Congress.

Take the president’s recent decision to pull all 2,000 U.S. troops out of Syria, soldiers whose boots the previous commandeer-in-chief had promised would never step on those sands in the first place, and also to remove halfof our forces from Afghanistan, America’s longest-ever war.

My immediate thought: Why not remove allthe troops from Afghanistan?

But, you can see how entrenched foreign intervention is . . . for American leaders.

While most of the GOP policy establishment howled at Donald Trump’s betrayal of the cause (whatever that cause is, exactly), so, too, did many Democrats. And they seem awfully earnest. More earnest than one has reason to expect from the objectors to “George W. Bush’s wars.”

Even Noam Chomskycame out saying that the U.S. should stay in Syria to save the Kurds, and Howard Dean tweetedthat American troops must remain in Afghanistan for the sake of women’s rights. Of course, these were hardly the stated goals of those military interventions.

What we are witnessing are eternal programs — warin these cases — that do not ever and cannot ever fulfill their basic purpose. No amount of occupation of Syria or Afghanistan or Iraq is going to give us what the neoconservatives promised: freedom and democracy and jubilation in the streets.

Freedom and democracy do not work that way.

There is a term for such impossible-to-win/impossible-to-stop policy messes: “self-licking ice cream cones.” It meansa “self-perpetuating system that has no purpose other than to sustain itself.”

That’s merely standard operating procedure, of course, for domestic bureaucracies. But in foreign military action? That’s awfully cold imagery, and too comic . . . for such human tragedy.

That’s not boss rule, no matter how chauvinistically presented. Instead, it is a refreshing recognition of reality and a move likely supported by the majority of foreign-policy-credential-lacking Americans, if not by official Washington.

But if one went looking for boss rule, it’s out there in America.

And best exemplified by the failed state of Illinois, former Land of Lincoln and now the Land of Great Big Fiscal Mess. The problem is simple: nearly 13 million Illinoisans are ruled by one man, Michael J. Madigan, Speaker of the House, “the longest-serving leader of any state or federal legislative body in the history of the United States.”

Ample reportingdemonstrates the political and patronage power Boss Madigan wields at all levels of government. Ample reporting also demonstrates the fiscal nightmare that has engulfed the state: the nation’s worstbond rating, unfunded pension liabilities that are six timesthe state’s annual revenues, and again last year Illinois led the nation in outbound migration, that is, citizens fleeing.

The people of Illinois have twice petitioned (to the tune of half a million voter signatures) to place term limits for their state legislators on the ballot, but those citizen-initiated efforts were blocked by the courts and, therefore, voters’ desires vetoed.

When real citizen-controlled government is replaced with a cheap imitation, it’s tragic for citizens.

It is preferred by politicians, however.

Maybe that’s why North Dakota Sen. David Hogue pre-filed a constitutional amendment for next year’s session that would require any future constitutional amendment petitioned onto the ballot by citizens and then passed by voters in a statewide General Election to . . . notbe enacted. Not until the Legislature says so . . . twice — in two separate sessions.

Hogue’s amendment exterminates the power of the people to bind their representatives constitutionally, arming the Legislature with a veto to overrule the people.

Term limits? Forget about it.

On his Say Anything Blog, Rob Port worriesthat the ballot initiative process has “become an avenue by which deep-pocketed, mostly out-of-state interests” are “buying their way onto the ballot and drowning out opposition with expensive marketing.”

In full disclosure, a different initiative, Measure 2, received contributionsof $250,000 from “out of state” — but from my outfit, from Liberty Initiative Fund. The idea was to help a North Dakota committee place Measure 2 for “citizen only voting” onto last November’s ballot.

Both measures were sponsored and voted for by the citizens of North Dakota, who have every constitutional right to work with folks from outside the Peace Garden State. Even me.

However one wants to deal with money or outside influence, changing the rules so that the people could no longer check their elected officials is worse than overkill, defeating the very purpose of the citizen initiative process.

The legislation constitutes political suicide for citizens — an engraved invitation to boss rule.

This new year, may America put down its self-licking ice cream cones, recover from Trump Derangement Syndrome brain freeze, and unify for citizen control over government— as opposed to boss rule.