Paul Jacob
|
Posted: Jul 01, 2018 12:01 AM
Share   Tweet
The opinions expressed by columnists are their own and do not necessarily represent the views of Townhall.com. 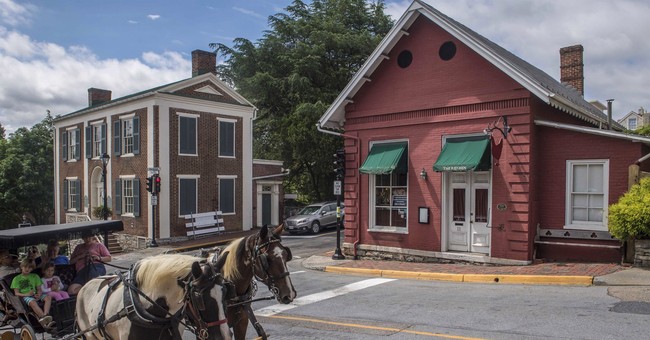 The recent exclusionary action against Sarah Huckabee Sanders at a Red Hen restaurant — where the government worker was asked to leave an eatery just for being President Trump’s official mouthpiece — points to an ugly trend. In that instance it got even uglier as she was hounded across the street by the Red Hen owner and her mob.

Is a barnyard revolt underway?

It is obvious that “left” and “right” no longer play as each other’s “loyal opposition.” On the left, we now find very loud Democrats shouting what amounts to no union with Republicans. Rep. Maxine Waters (D-Ca.) even went so far as to call for more of the kind of social shunning, shaming and marginalization that Mrs. Sanders was subjected to.

To the back of the bus!

For those of us who do not easily fit in the left-right/Democrat-Republican binary, this looks especially bizarre. Sure, Rep. Waters has long shown herself to be as mad as a hatter, but she’s not alone in the mad hat(e) game. She’s joined by quite a few Hollywood celebrities — Robert De Niro and Rob Reiner come quickest to mind, for their recent insane rantings.

But a few luminaries in the Democratic Party have sharply responded to Rep. Waters’ latest call to up the ante of antagonism: Sen. Chuck Schumer and Rep. Nancy Pelosi, at the very least, have distanced themselves from the notion that harassment could be an acceptable way of getting what one wants in a democracy.

A lot of the antagonism between the two parties comes down to differences between two broadly distinct philosophies, based upon substantial differences in focused-on-facts and prioritized values. According to academics Jonathan Haidt and Jordan Peterson, much of this seems built into our very biological beings.

Be that as it may, many disagreements are mere factual errors — about the other.

At FiveThirtyEight, Percy Bacon Jr. writes that “Democrats Are Wrong About Republicans. Republicans Are Wrong About Democrats.” Much of what each side thinks about the other is error. Citing research from last year, Mr. Bacon notes the sad fact that “about 40 percent of both Democrats and Republicans belong to their party because they oppose the other party’s values, rather than because they are particularly aligned with their own party.”

Why would this be? Why would people with diverse values separate out into two competing groups based on opposing the other?

The answers to this can be found in Public Choice, a branch of economics that deals with Political Science issues. It’s complex. The curious should explore. But here is a clue: follow the “cui bono,” who seeks what advantages for whom through the State. And then note how this competition for power affects our beliefs and attitudes.

The State demands compliance. Government’s laws and rulings and edicts and vast redistributions — the whole coercive array — express a value scale. With which no one personally agrees with in every particular. And because we demonstrate a wide diversity of values new government programs mess with our values. When a new one is put in place, each of us must give up a little more of our values. And freedom to achieve them.

No wonder we disagree. Values are hard to argue about honestly.

So that leaves us with facts. Could pointing out facts be enough?

Well, the left and right are indeed factually wrong about each other. Of the many divergences between reality and belief the left has about the right, and the right has about the left, one stands out. Democrats estimate that the number of Republicans who earn above $250K per year is over 44 percent. The actual percentage is a mere 2 percent. A very big difference. On the left, they think that Republicans are “the party of the rich.” And electing a billionaire to the presidency only encouraged this delusion. What Republicans are, really, is the party of mostly normal people who are not bigoted against someone because he or she is rich.

What does the right get wrong about the left? Many things. But the biggest that Perry Bacon points out are Republicans’ overestimates of the number of Democrats who are union members, LGB and agnostic/atheist. The overestimates on these are off by 33, 32 and 27 points respectively. These are big, but not as quite as big as Democrats’ overestimates of Republican wealth, which was at a whopping 42 points.

These misunderstandings almost constitute the divide. But treat them as a given. Why do such factual errors stick?

Basically, the left sees a differing attitude on inequality and attributes it to greed and selfishness where the truth is that non-leftists do not construe altruism in the same way as leftists do. And the right sees the left’s catering to certain groups and attributes something like treason — a letting in of the barbarians. (This doesn’t apply so much to unions.) Whereas most non-LGB and religious Democrats look upon those “deviant” groups as people to be defended, and the defense as civilization itself.

Trying to understand each other better might help. But that probably won’t take plase via social war and mass boycott — which is what is too many leftists seem to think will somehow make . . . us all more accepting of “marginalized” groups.

This seems not merely a long shot, but ludicrous.

As is the idea of refusing to serve Trumpians in restaurants.