Mobs Against Our Rights

Paul Jacob
|
Posted: May 06, 2018 12:01 AM
Share   Tweet
The opinions expressed by columnists are their own and do not necessarily represent the views of Townhall.com. 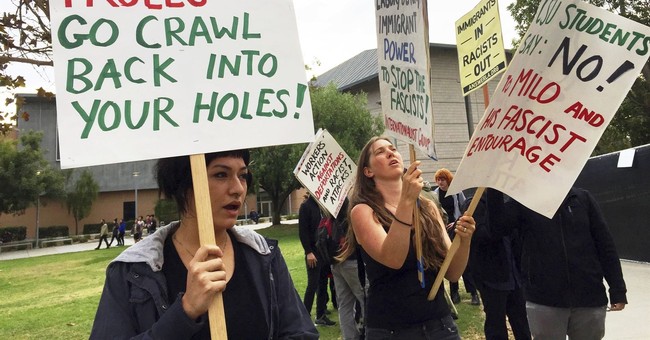 Your free speech rights can be violated by nearly anyone, as can your right to freely associate.

But though almost anyone can violate your rights, no one may do so. And the modern idea has been that governments ought to protect our rights.

Unfortunately, politically-motivated mobs have recently decided that they “are” government, or that they get to redefine our rights . . . by violating them. And governments and other established authorities have not been consistently coming to our aid.

Last month, libertarian-conservative provocateur Milo Yiannopoulis went into the Churchill Tavern in New York to dine with a fellow journalist.

Also in the establishment? The New York City chapter of the Democratic Socialists of America. When the socialists noticed Milo they stood up and shouted at him, chanting “Nazi scum, get out!”

Milo is not a Nazi, but his past too-gentle treatment of the alt-right counts as “Nazi” on the left.

What Milo experienced directly, and what has increasingly been seen on college campuses, is a new formulation of leftist focus. Gone is the “collective ownership of the means of production” and “prosperity under socialism.” Those don’t work. What leftists in general — and the socialists at the Churchill Tavern in particular — have been pushing is an inclusivist reading of the right of assembly.

The idea? All groups must be included in the political process and the in benefits of government and business — no protected group excluded.

But in the classic manner of the left, it is apparently hunky dory to exclude anyone who does not agree with “inclusion.”

Thus the philosophy of inclusion becomes the practice of exclusion.

Now, the rationale for this gets murkier the closer you examine it. It almost gets funny when activists defend their beloved shout-down/deplatforming tactic as their “free speech rights” in action — even using the fine point that the First Amendment only applies to governments as part of the justification.

It never seems to pop into their heads that free speech and free association rights can be violated by individuals and mobs with as fine and upstanding intentions as theirs. They do not see themselves as criminals. They see themselves as heroes.

More examples? One could almost pull them at random. Here is just one, which I happened to cover on Common Sense the same week as I dealt with the Churchill Tavern incident. Recently, the Federalist Society sponsored a speech at CUNY’s law school by Professor Josh Blackman of South Texas College of Law Houston. Student reaction was typically ugly, though perhaps more embarrassing and loutish and anti-intellectual than illegal and unjust.

What is interesting, though, is how another law professor at yet another law school reacted. He claimed, first, that many “lectures about ‘free speech’ are not really about ‘free speech,’ but rather are intended to provoke a reaction that will discredit universities.” Noting the understandable public reaction — “news stories . . . created, shaped, and disseminated by a well-funded network that wants to transform and take over universities” — he warned journalists and campus radicals (students, professors, and administrators alike) not to “take the bait.”

Going further, he pled with journalists to ignore campus speaking events that “goad” students into “tactical mistakes” by the “mean-spirited provocations” of “seasoned political operatives preying on vulnerable teenagers and inexperienced young adults.”

Yes, this is from a University of Chicago professor of law.

His admonishments are so easy to pick apart one wonders how he ever became a lawyer or professor.

First, it is easy to “bait” campus radicals because they have no tolerance for opinions not their own, and no respect for free speech.

Second, even when “lectures about free speech” have a performative meaning in addition to their surface meaning, it really is all about free speech and free assembly. A professor should understand that a subtext need not invalidate a text, especially when they dovetail so neatly.

Fourth, should we really worry about malign forces “taking over” universities? The revolution has already occurred.

The “inclusionist left” with its frantic, ugly, illiberal politics of exclusion, took over the academic world long ago.

David Bernstein, at the Volokh Conspiracy, called our attention to what “a security guard” darkly advised the Federalist Society speaker before his talk: devise “an ‘exit strategy.’”

This indicates to me that it is the American taxpayer who needs an exit strategy.

The inclusionists need to be excluded from access to taxpayer money.

And governments should go back to doing their first job, defending rights — especially by taking very seriously mob actions, in taverns and on the streets and campuses, that use intimidation, violence and threats to squelch others’ rights to speak and assemble freely