Paul Jacob
|
Posted: Oct 29, 2017 12:01 AM
Share   Tweet
The opinions expressed by columnists are their own and do not necessarily represent the views of Townhall.com. 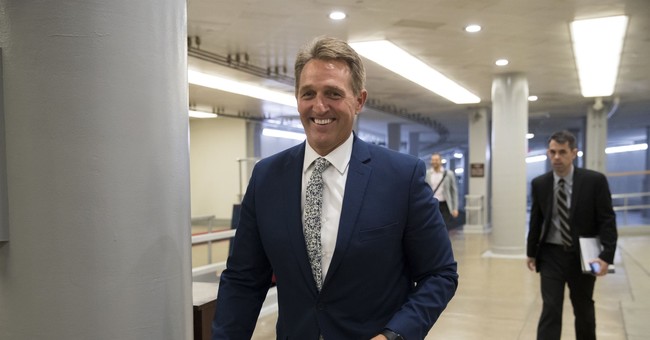 It’s tough,” explained Sen. Jeff Flake (R-Ariz.) after announcing his retirement last week. “I’m competitive. I like to fight these battles. But I also know that I couldn’t run the kind of race that I would be proud of and win in a Republican primary at this time.”

I know Jeff Flake just a little bit and I like him. But it is time for him to go.

Not because polls indicate he would lose, though. A loss might hurt the senator’s pride, but it is time for him to exit for a more substantial reason: because spending a career in power in Washington doesn’t appear to improve a person’s soul.

Or help the country, either.

I cannot forget that, years ago, Mr. Flake broke the self-imposed term limits pledge he had made to voters when first running for Congress. Now, having spent the last 17 years in Washington, a victory next year would have meant at least 24 uninterrupted years in power. And then six years down the road, a lease on six more, of course . . . and so many multiples of six to follow . . . for the rest of his life.

Today, instead, I’m confident that Citizen Jeff Flake will accomplish more for his fellow man than he has been able to as a national legislator.

It’s not all Mr. Flake’s fault, however. He would have accomplished more in less time if there had been mandatory term limits on Congress. Not self-imposed ones, which are self-renege-able, but constitutionally imposed.

It’s something Americans overwhelmingly favor, according to poll after poll after election result after election result for decades. Back in 1995, before the U.S. Supreme Court’s controversial 5-4 ruling denying states the power to limit the terms of their own representatives, 23 states had enacted term limit laws covering their congressional delegation — usually by ballot initiative.

Greg Weiner, associate professor of political science at Assumption College, worries the retirements of Senators Flake and Bob Corker (R-Tenn.) will further weaken Congress as an institution, eroding a critical constitutional check on the president and the executive branch.

In a Washington Post op-ed, Weiner praised Flake’s defense of “congressional prerogative,” noting specifically the senator’s efforts “to reclaim Congress’s war power by calling for a repeal of the post-9/11 Authorization for Use of Military Force and replacing it with a more restrained resolution dealing with the Islamic State.” Sadly, most senators seem asleep (at the Constitution) when it comes to foreign policy.

Weiner isn’t just peddling an anti-Trump agenda, mind you. “The problem pertains far less to opposition to this president,” he points out, “than to the long-range erosion of congressional resistance to the presidency as an institution.”

Over the last 100 years — the same century during which long-serving incumbents grew to dominate the legislative branch — Congress has handed over tremendous political power to the courts (to sort out all the feel-good, gobbledygook legislation passed by Congress) and to the president and the executive branch. Remember, not one bit of executive branch bureaucracy exists that wasn’t legislated into existence by Congress.

Numerous congressional actions have undercut the institution of Congress, sure, but there is an upside for members of Congress. They make good salaries . . . with lavishly lavish benefits. They are rarely defeated for re-election—in part, because any mistakes can be blamed elsewhere. Any foreign policy disaster can be fobbed off as the president’s fault or a failure by the State Department. If legislation fails to achieve the so well-intentioned aim, merely blame the bureaucracy for bad implementation. And if an unconstitutional law is passed, well, that’s for the courts to decide, isn’t it?

Just know that nothing could ever possibly be your congressman’s fault. He has voted for and against everything. And he always will.

It could, however, be the fault of congressmen with the other party.

So, when opponents of term limits argue that, by denying long tenure in office, legislative bodies will be weakened, it just doesn’t fit the obvious correlation we see between a career-oriented, incumbent-dominated Congress and a Congress shedding its own power and prerogatives in fire-sale fashion.

Term limits enthusiasts have so often been labeled “Congress-bashers,” as if we dislike the institution of Congress and want it diminished. Nothing could be further from the truth. Honesty may demand that we admit to a certain weakness of ardor for politicians, but we do love Congress.

We want to save Congress. With term limits.