A Sad Question After a Violent Day

Paul Jacob
|
Posted: Aug 13, 2017 12:01 AM
Share   Tweet
The opinions expressed by columnists are their own and do not necessarily represent the views of Townhall.com. 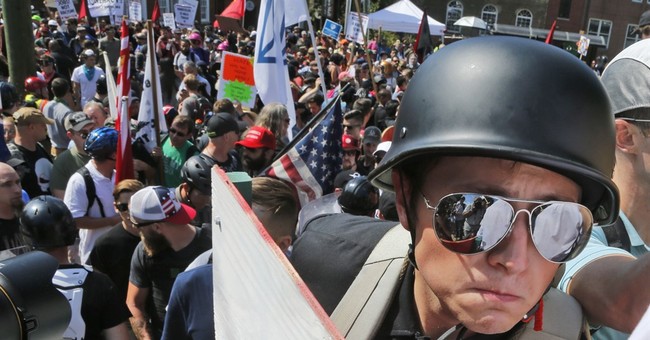 If you watched the news in the last 24 hours, you again saw the political violence that has become far too common in modern America. Not to mention the lack of police response, which has also become strangely ubiquitous.

As I write, events continue to unfold in Charlottesville, Virginia, where a Unite the Right rally organized by Jason Kessler, the “alt-right” leader of Unity and Security for America, is taking place — in large part to protest the city council’s decision to remove a Confederate statue.

By “events,” I mean punches thrown, objects hurled, people beaten down with clubs, folks sprayed with mace and other chemical agents, and then a car driven into the crowd — killing one person and injuring 19 others.

Surely, the driver of that automobile will face consequences. Though police have not yet said whether the collision was intentional or accidental as this column is being submitted, video shows one car crashing into the other at a high rate of speed and then an immediate attempt to get away from the scene. It was almost certainly purposeful.

Let’s hope the perpetrators of non-vehicular violence resulting in harms less than death will also be arrested, charged and brought to justice. But don’t hold your breath.

No one should be surprised that even in such a melee few if any arrests are made, precious little justice dispensed. We’ve seen similar mayhem between right-wing fascists and left-wing fascists recently in Portland, Oregon, in full view of police without intervention or serious repercussions for those responsible.

At last year’s Trump rally in San Jose, California, police weren’t standing idly by, but, instead, in the midst of the worst, they were nowhere to be found. For some inexplicable reason, especially with all the threats and the obvious potential for violence, the city’s cops seemed to take the night off. One need only search “San Jose Trump rally” on YouTube to see video after video of absolute mayhem, with women and elderly attendees harassed and assaulted by roaming gangs of anti-Trump thugs.

Before the ugliness in San Jose, a Trump rally scheduled for Chicago was cancelled for fear that police could not (or would not?) contain the opposition mob and keep those attending, or perhaps even Mr. Trump, safe.

If Americans cannot attend a political speech — especially for someone popular and “mainstream” enough to then become the president — without fear of bodily harm, how can we expect to self-govern?

Earlier this year, when so-called Antifa activists disrupted a scheduled talk by Milo Yiannopoulos at the University of California at Berkeley by smashing plate-glass windows, setting fires and beating people who they suspected of being pro-Trump, the police arrested three fewer than in San Jose. (That spate of violence and property destruction helped create a climate where later threats to do similar criminal acts caused the university to cancel a speech by Ann Coulter. “Land of the free” and all.)

The response of law enforcement to these disturbing incidents and many others has been to acquiesce to the brutality of the mob. Violence has been effective. Quite obviously political speech can be shut down by threats and bad behavior. Which, of course, serves to encourage yet more violence and intimidation.

Which leads us to Charlottesville.

“Men in combat gear, some waring [sic] bicycle and motorcycle helmets and carrying clubs and sticks and makeshift shields fought each other on the downtown streets, with little police interference,” the Washington Post reported.

“State police and Charlottesville police in riot gear were stationed on side streets but were not in the most concentrated areas where protesters and counter protesters were brawling,” the Post explained. “Gov. Terry McAuliffe had placed the National Guard on standby, but they, too, were not in the downtown area when morning clashes were occurring.”

Why not? Why were the police perched on side streets away from the action? Who were they protecting there?

Authorities certainly had every reason to expect acts of violence. On Friday night, white supremacist protesters marched through the University of Virginia campus chanting “White lives matter!” and “You will not replace us!” and also, just in case anyone doubted their political views were indeed neo-nazi, “Jews will not replace us!”

At the Thomas Jefferson statue on campus, the estimated two hundred marchers were met and attacked by counter protesters, at least one of whom sprayed the assembled racist, anti-Semitic throng with a chemical agent leaving a dozen marchers “floundering and seeking medical assistance.”

At least, in this instance, the police, who were on the scene, thankfully “jumped in and broke up the fights.” Still, according to the Post, “It was not clear if any one was arrested.”

The idea of white supremacy is deeply repugnant. Racism by anyone against any race is pernicious. But even those spouting such despicable views must have their First Amendment right to publicly assemble and speak their minds. That means it is the job of police to protect even the rights of white nationalists. And anyone else — as far right, and left, as the political spectrum goes.

Thankfully, all combined they represent a tiny minority of Americans right, left and in between.

“We condemn in the strongest possible terms,” President Donald Trump said, yesterday, “this egregious display of hatred, bigotry and violence,” and then, seemingly off script, he added, “on many sides. It’s been going on for a long time in our country. Not Donald Trump, not Barack Obama, it’s been going on for a long, long time.” Back to reading, he continued, “It has no place in America. What is vital now is a swift restoration of law and order and the protection of innocent lives.”

If we demand that violence cease, then police have to stop providing it a safe space.

And if police cannot or will not protect the right of citizens to speak their minds politically, then what? Certain questions come to mind as soon as we witness police letting protesters and counter-protestors run riot. Why do we have police?

Jim Jordan: FBI Is Engaging in Purge of 'Conservative Employees'
Townhall
Another Ron Klain boast (an attempted dunk on Trump) is aging like fine milk in the summer sun
Twitchy
Fetterman Goes on MSNBC and Confusion About 'Balls' Follows
Redstate
Joe Biden’s Pettiness Just Got so Much Worse
PJ Media