Finns, Americans and the Income Guarantee 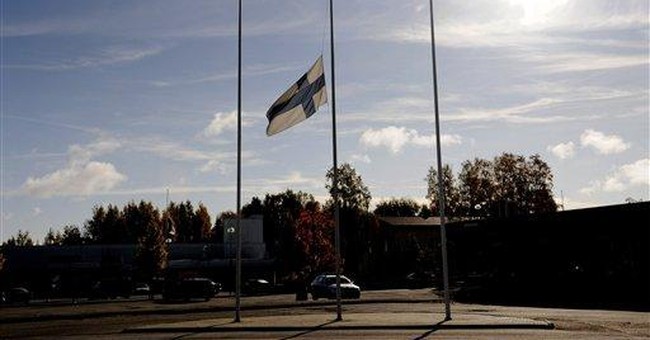 Some folks think the world owes them a living.

Must we appease them?

Should government hand every man, woman and child a check each month to make sure we’re all taken care of?

Finland is looking at this basic idea, which Finns dub an “unconditional basic income” (UBI). One proposal suggests providing every Finn 800-Euros a month without regard to income, or lack thereof. Polling shows the basic idea is quite popular, with 69 percent of Finns endorsing a slightly more generous proposal.

It sounds like Democrat George McGovern’s “guaranteed annual income,” which was mocked and ridiculed during the 1972 presidential campaign.

But you might be surprised who has supported the UBI: free-market economist Milton Friedman advanced the similar “negative income tax” back in 1962; Martin Luther King liked it; Austrian economist F. A. Hayek endorsed the concept; Charles Murray, author of Losing Ground, has developed a version of the proposal.

The rationale? Save money by consolidating duplicative welfare programs. After all, the U.S. government runs 79 means-tested benefit programs, each with its costly, redundant bureaucracy.

Finland is suffering from high unemployment — 10 percent of adults are without jobs and that increases to 23 percent among younger workers. Counter-intuitively, perhaps, Finland’s social engineers think the move toward the UBI will increase employment.

Why? Because welfare benefits can currently be withdrawn when Finns gain employment and the attendant income, which discourages folks from risking their secure base benefits.

“The Finns believe that basic guaranteed income could allow people to take low-paying jobs without incurring personal cost,” writes Mikko Arevuo, a senior lecturer in strategic management at Regent’s University London. “At the moment, taking a low paying job may result in lower welfare benefits and many temporary jobs go unfilled as the welfare benefits system is not agile enough to cope with temporary employment that reflects the changing nature of work. There can be a lengthy time lag before welfare payments are restored after a temporary contract employment has been terminated.”

Our current welfare system creates “disincentives to work,” argues Matt Zwolinski, a University of San Diego professor and one of the leading advocates of moving our welfare state in the direction of a Basic Income Guarantee (BIG). He notes that, “poor people face, in some cases, an extremely high marginal tax rate, because if they work an additional, say, 10 hours a week, not only are they paying taxes on that additional 10 hours worth of income, but they’re also, in effect, paying by the lost benefits that they’re giving up as a result of their income rising too high.”

It would be great to get rid of this huge disincentive. “The idea of replacing benefits and tax credits with UBI has huge intuitive appeal,” writes The Guardian’s Declan Gaffney. “No means-testing of benefits, and thus no families stuck in poverty traps where benefit withdrawal erodes any increase in earnings. No out-of-work claimants afraid to take up short-term job offers for fear of losing benefit entitlement. No intrusive testing of benefit eligibility, no punitive sanctions regime, no job-centre advisers hassling people to apply for the lowest-paid jobs. No fraud and no gaming the system.” And then there’s the kicker: “Most of the bureaucracy of the welfare system swept away.”

Don’t get me wrong: the government passing out money — our money — stinks. Folks should take care of themselves, or depend on charity — not rely on confiscatory taxation. Yet, as I told my Common Sense e-letter readers last week, if this version of a safety net does indeed encourage industry, employment, and good old-fashioned money-making amongst the poor . . . it may very well be a step in the right direction.

But that’s only if, by consolidating redundant and costly bureaucracies, we can provide better incentives for poor people to go to work, without hiking up taxes on those already working.

Economist David R. Henderson calculates the cost and argues that providing every citizen this guaranteed income would require a nearly 50 percent tax increase. That’s because the benefit of such a system, at least in ending the disincentive for the poor to go to work, requires providing the guarantee universally without means-testing.

Where Zwolinski argues that BIG is “better than doing nothing” to our clunky, counter-productive welfare system, Henderson counters that our choices are not so limited. He argues, “Occupational licensing, whereby local, state, and federal governments insist that people be licensed before they can practice in one of about eight hundred occupations, prevents people, many of them at below-median income, from working . . . Let’s end occupational licensing. . . . The web of regulation — at all levels of government in the United States — makes it difficult for people to start or expand businesses.”

The best anti-poverty program will do two things: (1) tear down the barriers to work, to market-entry, and (2) stop paying people not to work.

No, the world doesn’t owe anyone a living. But we certainly owe each other that apparently excruciating labor of removing obstacles to progress previously thrown up in the name ofcaring.