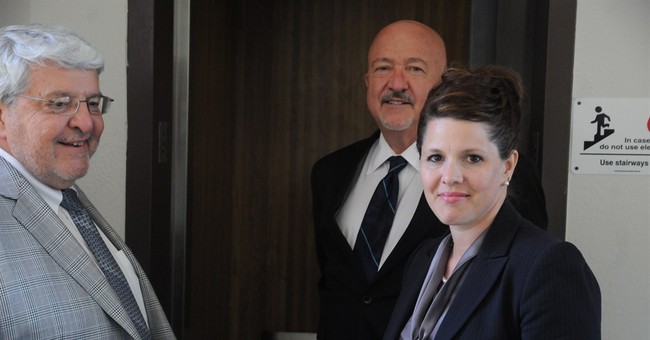 Early last Wednesday evening jurors communicated to the judge that they were split on a number of the charges against Dr. Annette Bosworth. And yet later that night they found her guilty on all counts.

She’s the South Dakota physician who filed several hundred nominating petitions to put her name on the ballot for U.S. Senate last year — six of which sported the names of 37 people who signed without Dr. Bosworth being in the room to witness them actually put pen to paper.

Her sister was one.

The affidavit on the petition does indeed read that the circulator must witness each person’s signature. Bosworth, a first-time candidate, did err in signing herself as the circulator of those six petitions.

In court she argued that her attorney — who legally notarized those six petitions — had told her she met the legal definition of a circulator. The petitions were circulated at her medical office as well as at several Hutterite colonies where she saw patients. She certainly knew these people and knew they were registered voters and supporters.

One of the things I like about Dr. Bosworth is that she has been honest and forthright from the beginning: she wasn’t actually physically present to witness the signatures in question. In fact, her “crime” was obvious: on the dates those 37 individuals affixed their signatures to the petition she was out of the country on a medical mercy mission to assist typhoon victims in the Philippines.

Now a dozen-time felon, she faces sentencing on July 1, which could be as severe as 24 years in prison and $48,000 in fines.

Of course, that’s ridiculous and outrageous and . . . absolutely chilling.

Earlier this month, as president of Citizens in Charge Foundation, I traveled to Sioux Falls and Pierre, South Dakota, to release a report on this prosecution. The goal wasn’t to defend Annette Bosworth, but to urge that some common sense salve be applied to the meting out of justice, so as to encourage, rather than discourage, political participation.

My three main findings were:

During my trip, I publicly asked Mr. Jackley to consider the impact of this prosecution and to take another look at resolving this case without charging felonies, which might end Dr. Bosworth’s medical career, and especially without the threat of decades in prison, which is unfathomable (except in places like North Korea).

The AG didn’t take my advice. But he did respond by assuring the state’s largest newspaper that it is “well understood in state law” that Dr. Bosworth’s offenses “are punishable by probation and not jail time.”

After last week’s guilty verdicts, Jackley seemed to be hedging just a bit on that pronouncement. “Under South Dakota law, non-violent felonies such as these carry a presumption of no or limited actual jail time," Jackley reportedly said to The Associated Press. But he added: “The presumption may be overcome by the defendant’s conduct.”

The Argus Leader paraphrased Jackley’s explanation that “one mitigating factor would be if Bosworth accepted responsibility.”

Hmmm. As noted previously, Bosworth never told anyone she was physically present for those 37 signatures being affixed to the petitions. She has from the beginning accepted full responsibility for her part in what happened, even taking the witness stand at trial and acknowledging, “We screwed up.”

Yet, “accepting responsibility” might have a much different meaning to some pillars of the South Dakota establishment than to you or me. A report by KSFY Television, the Sioux Falls ABC affiliate, suggests: “Dr. Bosworth has the right to appeal her case but by not accepting responsibility for her mistakes, it's a move that could hurt the chances that she avoids jail time all together.”

Bosworth’s attorney has already announced she intends to appeal. It would add travesty on top of tragedy if she were to be bullied out of appealing her convictions.

There is no public purpose to be served by putting this woman in jail for 15 minutes. She is not a threat to society. She is not anymore even as much of a threat to the AG and the state’s officialdom — electorally, I mean.

But even if Dr. Bosworth gets only probation, she is likely to lose her medical license. “I am going to miss being a doctor," she texted to reporters. “I really love being a doctor.”

According to the South Dakota Medical Board, while a felony conviction can be grounds for revoking a doctor’s license to practice, it is not an “automatic dis-qualifier.” Still, as much as Bosworth and the state medical board have tangled in the past, hoping they’ll do the right thing may be expecting quite a lot.

Annette Bosworth should be held accountable for her mistakes in the petition process. But her prosecution and the threat of draconian punishment — 24 years in prison, loss of her medical career — doesn’t send a message that government and the election process is accountable.

It sends a clear signal, instead, that South Dakota’s election process is scary and out-of-control.