More Aid and Subsidy for Billionaires -- Who's For It? 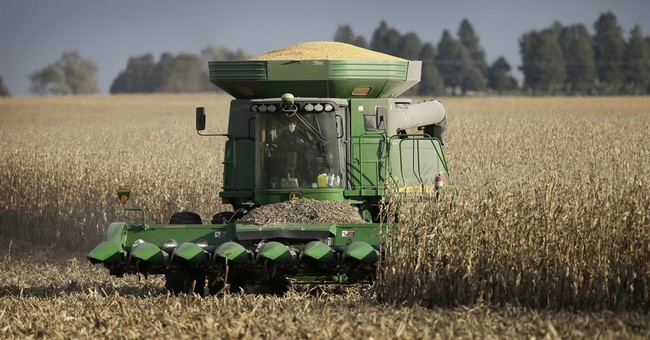 Big government rests upon myths, and the people who support it necessarily believe things about politics and society — and themselves — that simply aren’t true.

This week, a new report from the Government Accountability Office shows just who benefits from federal crop insurance subsidies: big businesses, billionaires, and the like.

It’s not primarily the “little guy” or “the small family farm” of American agrarian mythology. It’s the people for whom progressives usually seethe with hatred.

Those on the left must either oppose their “progressive” programs or get over their alleged opposition to “the rich.”

“Liberals,” “progressives” and other political cadres of politicians, bureaucrats, lobbyists and college professors often trumpet their alleged bedrock position: that the reason we “cannot” be satisfied with limited government, dedicated to just a few tasks, and must instead govern in the “modern” way, where the State may manage anything and everything, is that under “laissez faire” the rich would overrun us, and the poor would suffer.

We need to help the poor and fight the rich, the argument goes, so we must break the old rules.

That is why, for Progressives, the old view of the Constitution has got to go, replaced with a more “activist,” “nuanced” view. The market’s creative destruction/destructive creation “obviously” harms the little guy, the underdog, and lets big business run over everything.

Last week’s GAO report indicates that the opposite is likely true: that big businesses are kept ascendant when governments bend over backwards to provide programs that benefit them.

Now, let’s not forget: progressives offer new principles in place of the old. Instead of old-fashioned, common-sense morality (don’t murder; don’t steal; help others but don’t become a nag or a tyrant about it) they offer “more sophisticated ones.” Like equality of income rather than equality before the law. Like “government knows best” rather than freedom and self-responsibility. Like the difference principle rather than “mind your business.”

The “difference principle” is from philosopher John Rawls, who in A Theory of Justice argued we are morally required to ensure that those who are least advantaged will be benefitted, not forgotten.

It’s an interesting approach, and I’m sure those who argue over this stuff in colleges and universities have a great deal of fun mulling over the difficulties such an approach necessarily entails. But when we see it in action, it takes on a whole new complexion. For Rawls’s very “progressive” requirement that we must allow only those inequalities in society that work to the advantage of the worst-off proves to be tricky. All current institutions aiming to accomplish this wind up doing remarkably surprising things.

Like helping the rich at the expense of the poor.

Once you allow the government to take money from one group of people and give it to others, or make programs that do this in effect if not quite so outright — once you breach the idea of general principles, and start regulating society by micromanagement — then “anything goes.” Politics and government can’t be run by philosophers.

Aid the poor by force and redistribution, you also have every reason to aid the larger voting bloc, middle class. And on and on from there.

If what government does is not regulated by general constitutional limits, it become necessarily regulated by . . . changing opinion.

And everybody has opinions.

In the context of democratic republicanism, this leads to something quite contrary-to-goal: it’s the wealthier interests that get the most say. So, eventually — actually, usually it’s right away — the rich and the wealthy and big businesses get the upper hand in this game of Grab the Goodies.

If progressives were seriously against big business, you’d think they would have more loudly protested the Wall Street bailouts. But Obama went along. Congressional Democrats were more committed to bailouts than congressional Republicans. Even Occupiers protesting on the streets were not unequivocally against bailouts. It was the Tea Partiers who took the principled “don’t bail out the rich” stand.

Why? It’s simple: progressives like bailouts; that’s their philosophy. They believe in bailing out everybody!

Which leads to the abandonment of many stated principles. Progressives hate the rich, and yet it is obviously the rich — or some rich — who benefit most from their policies. No wonder they have so many billionaire donors — and no wonder they talk endlessly about the Koch brothers, those rarities amongst billionaires who give to limited-government causes. (Complain loudly enough about this minority, they hope everyone forgets the majority on their side.)

Bailouts, subsidies, tax breaks, etc. — these are all “progressive” tools used by the state to manage society. All of these rub against the grain of limited government. But progressives supportunlimited government. So, at some point they must come to terms with the tools, the policies, they always end up supporting.

The subsidy tool is an old stand-by of American agricultural policy. The US. Department of Agriculture used to give a lot of money to farmers not to produce goods. This was to prop up prices. (Not make prices cheaper for the poor, mind you; to make them higher.) But that got too disgusting and stupid-looking even for politicians, so these days they subsidize crop insurance.

And now we find that “thousands of individuals with incomes over $500,000 have received $317 million in subsidies over five years.” And here’s the kicker: “not all were farmers.”

Many were big businesses with multiple arms in multiple industries.

Further, as Elizabeth Harrington wrote last week in the Free Beacon, “The GAO also found four billionaires who received $118,400 in subsidies, and collected about $38,300 in claims payments over five years. Each billionaire insured an average of 18,200 acres.”

This is where special “government programs” — so beloved by the left in general, but also supported by conservatives and moderates, the bulk of whom have swallowed hunks of Progressive Era ideology whole — lead us to. Helping billionaires make more billions.

Hey, I don’t mind anyone making a fortune. I mind being taxed or regulated so they can get richer. I’ll contribute to billionaires’ bank balances when I buy what they offer. That seems enough.