But One Life to Give for My Metro 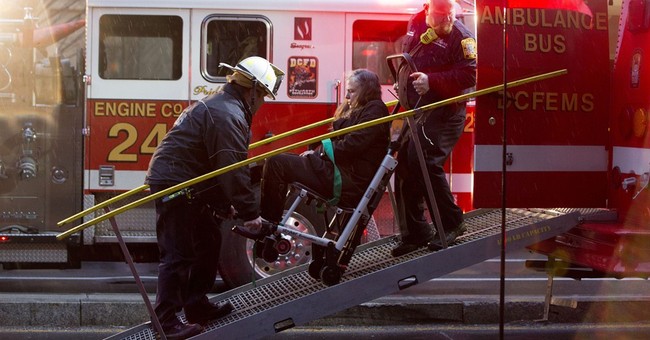 “Metro has a reputation for shoddy service and a history of not learning from its mistakes,” Aaron Wiener acknowledged in a recent column for The Washington Post. He then asked, “Why should we reward such a poorly run enterprise with our business, or place our lives in the hands of a system we can’t trust?”

Wiener doesn’t answer it. Instead, he merely asserts that we should double down and commit ourselves to Metro. His is a pure and faithful devotion, as indicated in his headline: “Metro’s a mess. All the more reason to ride it.”

Two weeks ago, a woman died traveling on Washington’s once regal subway system — built back in 1976 by American taxpayers from far and wide. The lady in her 60s was overcome by smoke after several train cars became stuck in a tunnel that filled with smoke. Another 84 riders were hospitalized, two in critical condition.

Accidents happen, of course. Even in the best of enterprises. But no one suggests the Washington Metropolitan Area Transit Authority is that.

And consider the city’s response in this moment of peril.

First, the DC Fire squad was woefully slow to arrive; victims say more than 30 minutes. So slow that the courageous public officials ruling the District of Columbia have been unwilling to publicly comment as to precisely how slow. Not Muriel Bowser, the new mayor; nor the Chairman of Washington’s Metro board. The latter gentleman provided an excuse, however, claiming he “cannot speak to it” because of the ongoing investigation by the National Transportation Safety Board.

There are also claims that Metro personnel failed to communicate to the emergency responders that this “mass casualty incident” was really any big deal.

Then, upon their late arrival, the rescuers’ radios didn’t work. “[D]espite hundreds of millions of dollars in upgrades and new training and safety protocols at the transit agency,” The Washington Post reported, “a critical piece of infrastructure — emergency communications — remains a significant problem.”

Soon we learned these fires have been occurring with greater and greater frequency. A 2014 television report warned that the occurrence of smoke and fire on the tracks had almost doubled in the first quarter over the year before.

Writing here for The City Paper, Aaron Wiener explains that the deadly smoke incident involved “1000-series cars . . . precisely the old cars that the NTSB warned in 2010 were not well equipped for a crash. Granted, this wasn’t a crash, but it does raise questions about Metro’s speed in upgrading its problematic fleet.”

That crash was both predictable and preventable, according to an NTSB report, which found half of the system’s track circuit modules were “prone to malfunction” and that 25 percent of the train cars offered substandard protection in a crash.

At the time, then-NTSB Chair Deborah Hersman admitted, “Metro was on a collision course long before this accident. The only question was when Metro would have another accident — and of what magnitude.”

It seems little has changed. Or will change. Yet, Aaron Wiener implores us to ride Metro . . . now more than ever.

It is hard to imagine the good columnist suggesting that we continue to do business with a big corporation that was “poorly run,” provided “shoddy service,” forged “a history of not learning from its mistakes,” and had just been quite possibly negligent in the death of yet another customer.

You see, it is the public nature of public transportation that bestows upon the process of moving people from one place to another a near-magical, metaphysical goodness. Like liberty — though, it seems clear that, given a choice, Mr. Wiener would willingly sacrifice some measure of liberty for government-subsidized transit.

If we take Wiener and many other public transit enthusiasts seriously, government-managed transit is not best understood by the services it provides — not like the billions of things bought and sold on the market, or even many other things government might help provide. It is hallowed by something ineffable, setting it apart from food or shelter or clothing or even the protection of life itself. One indicator of this is Wiener’s continued promotion. By strenuously urging more ridership in the face of deadly failures, he implies that rescuing Metro might need to come before rescuing the people riding Metro.

Without that intriguing little voice called “the profit motive” — and its flip side, the fear of loss — D.C.’s Metro, like other systems all across the country, is run “politically,” bureaucratically. Comprised of a board of officials with no financial investment in the never-to-be financial success of the enterprise, their only skin at risk plays in a different game: the next election or round of appointment.

These directors please people now, rather than invest in future gains. There just isn’t the same incentive to make the necessary investment in infrastructure required to run the subways safely and sustainably into the future. There are no profits to “protect” and in the future, someone else may be holding the hot seat.

Were this contracted out to a private company, things might be different. A private contractor with Metro’s record of accidents and, moreover, the system’s repeated failures in addressing safety concerns, would be shut down. By the government.

Sadly, Metro faces no such threat.

However, the transit agency has been hit with a different one: ridership has fallen to the lowest point in a decade. People are voting with their feet.