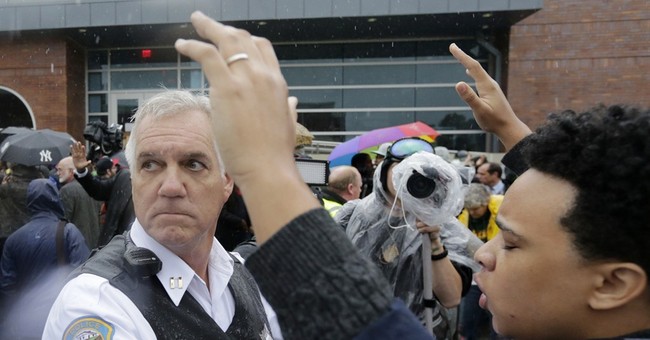 Justice is blind, or so it attempts to be. Sometimes justice is deaf and dumb, too.

The people of Ferguson, Missouri, await — along with the rest of the nation — the imminent announcement from the local grand jury, either a decision to indict police officer Darren Wilson for the killing of 18-year-old Michael Brown or a decision not to indict the policeman. The latter determination would suggest that the killing may have been justified self-defense.

No matter the grand jury’s decision, many citizens in Ferguson and across the country will curse the blindness of what they will believe has been an injustice.

The point of “blind justice” isn’t, of course, to lack vision or knowledge in deciding cases. It is to be devoid of bias and partiality — so that standing before police and prosecutors and judges and juries, folks with wealth or celebrity or connections to personages in high places don’t have any greater or lesser advantage than those without such attributes.

Part of that impartiality comes down to treating both Michael Brown and Darren Wilson as innocent until proven guilty.

In August, I wrote three columns in this space about the shooting of Michael Brown and the limits of what we actually know as facts surrounding that fatal incident. In fact, many readers jumped to the conclusion that I should have jumped to their particular conclusion of the case. I won’t belabor those issues further here, except to maintain that you and I still do not know precisely what happened on that fateful day.

That hasn’t stopped some from declaring that the real issue is race, or prevented others from pointing to a culture of criminality, or still others, who argue that the overriding issue is increasing militarization of our local police and growing incidents of brutality. All are indeed issues across the country and each one may have played a role in the tragic events that led to Brown’s death.

The one thing we should know for certain, however, is that there is indeed a solution for not knowing what happened in Ferguson that day last August. In the future, we can know — in Ferguson and every other town. Require police officers to wear cameras on their labels.

Now I’m not usually a “let’s pass a new law” guy, but this is not a murky option, nor is it a fantasy. The technology is readily available and surprisingly inexpensive. There need not be riots and finger-pointing and hyperventilated accusations of bias or bigotry. We can just watch the digital recordings.

A number of police forces across the country have already begun outfitting their officers with such cameras. Initial studies show fewer complaints against police, and force used less frequently. “The findings” from an extensive study of Rialto, California, police use of cameras “suggest more than a 50 percent reduction in the total number of incidents of use-of-force compared to control-conditions, and nearly ten times more citizens’ complaints in the 12-months prior to the experiment.”

One might expect some resistance from politically powerful police unions, but policemen are being exonerated so often by dashboard cameras they may increasingly demand the lapel cameras. Recently, police officials in New York City and Houston have asked for cameras to begin pilot programs.

Where will the battle lines be drawn? Not by the Rev. Al Sharpton, who has already expressed support for the cameras. The American Civil Liberties Union has likewise endorsed such cameras, with Jay Stanley, a senior policy analyst, quipping, “When it comes to the citizenry watching the government, we like that.”

Certainly, numerous issues remain, from technical questions to policy matters about when the cameras must be used and what happens when a policeman turns off the camera. Just last week, protests erupted in Saratoga Springs, Utah, after it was reported that a police officer involved in the fatal shooting of 22-year-old Darrien Hunt had turned his lapel camera off.

Nor will cameras even when used properly always show us enough of the truth. There is no perfect world in the offing. But there is a straightforward solution to avoid greater violence and division due to a lack of knowledge.

Placing cameras on cops won’t soften the heart of every racist person in the country, it won’t save the culture, and it won’t make all policemen into carbon copies of Mayberry’s Sheriff Andy Taylor. But American justice should open its eyes long enough to put cameras to use. We can, thereby, both reduce the level of the unknown in violent incidents and create incentives for better behavior by policeman and citizen alike.

We need our system of justice to have this much vision.