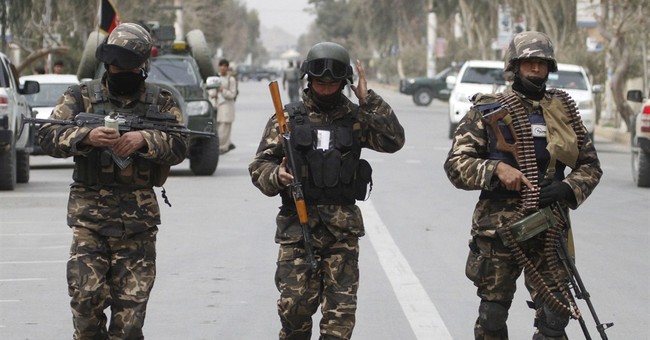 How do you turn a fine, upstanding, conscientious and goal-driven young man into a terrorist?

That is, treating him very badly. Drop the whole weight of the law on him . . . for holding the wrong opinions.

And now you may have figured out the problem.

The hatred of self-defense, the absolute fear of it — the quivering, poltroonish over-reaction to the very idea — is common amongst today’s politicians, educators and even some benighted, cowardly law enforcement folks. It’s gone to the crazed demonization of weaponry, zero tolerance against owning and carrying “arms” — despite the Second Amendment.

This 18-year-old is set to be prosecuted for a Class 5 felony for having a pocket knife in his EMT vest, a stun gun in his car’s glove box, and a couple of sporty Airsoft (gaming) guns in his trunk. (Early reports suggest that it was the pocket knife that did it. Carrying a weapon. . . ! dontcha know.) All these were discovered after a probably illegal (and definitely unjust) search of his car by the high school principal and vice principal at the tech school he attended in (get this) Jefferson, Ohio. These two had been alerted to his pro-self-defense videos on YouTube, and they sprang into hysterical action.

Mr. Wiser spent thirteen days in jail. Prosecutors are intent on prosecuting, reiterating their bureaucratic point that they must uphold the law. Even if common sense screams out against it. And one judge joined the freak-out by having weapons taken out of the family home and sent to the lad’s dying grandfather, whom the accused is now not allowed to see . . . because of the guns now there.

The problem is easy to identify. It’s the rejection of the philosophical foundation of a free society. The state gains its right to govern based on our rights to defend ourselves. And we don’t give up those rights by being within a state’s boundaries — we surrender only our right to retaliate.

It would be easy to blame liberal-progressives, with their advanced and decadent state-worship. But conservatives have contributed to this statist degradation of republican doctrine, too, by pushing the zero tolerance stance.

One thing leads to another.

That’s how freedom is lost. We’re all victims, though Mr. Wiser is bearing the brunt of the tyranny.

The jaw-dropping irony, though, is that Mr. Wiser is precisely the kind of kid you’d be expecting the authorities to be grooming. He claims already to have received several certifications:

But if the felony prosecution goes through, his career in public service is finished. Over. Done. Not only would he not be able to become a fireman, he wouldn’t be able to work, as he put it, as a janitor in a school.

As he sees it, his life could be ruined by the nonsense he’s now enduring. Over a pocket knife, no less — something every young man of my father’s generation carried with him at all times.

Remember: He was targeted expressly because he publicly promotes self-defense. This is what fear-mongering has wrought in modern America.

I began by talking terrorism. The surest way to turn a person into a terrorist is to set up the whole system of justice unjustly against the innocent. But that very process of injustice is itself a form of terrorism. State terrorism.

That it is petty and stupid doesn’t make it any less terroristic. For it is fear of the government these officials aim to inculcate. To refuse to use common sense as a check on the massive power of the state against this young man shows the banner colors all too clearly.