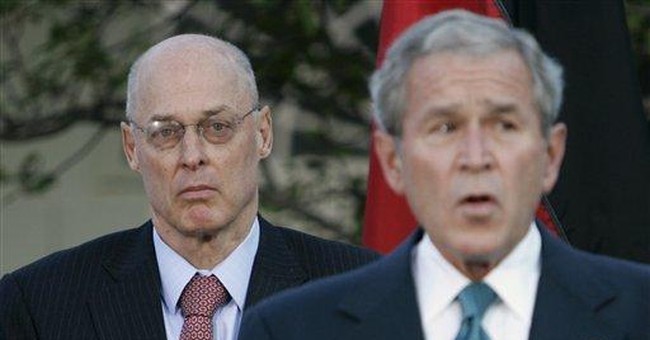 In the 14th century, the Black Death hit Italian shores and quickly spread. People panicked, sought causes, tried to find someone to blame.

In medieval Europe, they rounded up the usual suspects: First the Jews, then the heretics, then witches. Not even cats were safe (according to some accounts) since, as “everyone knew,” cats were witches’ “familiars.” Members of these groups were killed in great numbers, burned at the stake, hung, thrown into bogs. It was not pleasant.

The “usual suspects” got attention in our current crisis, too. Who’s to blame? “Wall Street greed” and “unregulated markets” and the like. Hordes of Democrats said the fault lied with Republicans. I have heard no small number of Republicans return the favor.

Then, just to show how modern we all are, there were no killings. Instead, the two parties got together and threw money at the offenders.

Finding Causes
The Jews, of course, had nothing to do with causing the plague. I’m convinced witches were likewise completely innocent of the charges.

And the cats? Well, house cats may have provided Europeans with their only advantage, for cats killed the rats that nurtured and transported and transmitted the plague. By panicking, Europeans may have made their lot worse than it would otherwise have been.

You might think we would have grown up by now, would now know enough not to panic. Still, the rush to judgment has been swift . . . and as unerringly wrong-headed as a medieval conspiracy theorist.

First one major institution, then another, was taken over by the federal government. More are threatened by Bush’s new nationalization procedures. The old guard of political insiders, on both sides of the aisles, praised these moves. The only politicians to oppose the take-overs in significant number were first-term Republicans in Congress. (More evidence that incumbent expertise isn’t worth shoring up with unlimited terms in office.)

The awful truth of a burst bubble is the specter of bankruptcy. A lot of people just cannot stand the very idea. They’ll do anything to postpone it, if they can.

Yet there’s an awful lot of evidence that you just have to weather these periods, not “prop things up.” The post-Great War depression in Britain, and America’s own early days in the Great Depression show as much: Both regimes worked mightily to prevent a huge sector of prices from hitting their natural floors. In those cases, it was mainly wages that got propped up. The effect? Massive unemployment.

Today we fear that housing prices will hit their natural floors (so to speak), and try to prevent the downward motion of economic gravity. And we shall reap “idle resources” for the effort. It will not be pleasant.

Already, after committing about a trillion dollars to propping up the major players that so miserably failed, the stock market goes into its own special panic, indicating that the investment crowd is not exactly assured by government that piecemeal nationalization is the proper response to a crisis.

There are a number of causes of the current crisis. But to understand the response, you have to keep in mind something else: fear of widespread bankruptcies.

And it’s not just about the mortgage fiasco. Or banks. Or financial intermediaries. The current crisis reveals three previously hidden forms of bankruptcy.

A Bankruptcy of Expertise
All those experts who goaded us into buying homes we could not afford, who said that housing prices could only go up and up and up . . . they don’t look so smart now, do they?

The very system these geniuses set up, to hedge risk in the mortgage markets, turns out to have had all the ingenuity of Marxism.

The trouble with socialism was that, without a market in producers’ goods, planners couldn’t calculate the value of the goods at their disposal. Unable rationally to plan to meet consumer needs, planners were left producing too many of the wrong kinds of shoes, not enough of the kinds wanted.

Marxians ended up looking like the biggest kind of fools.

Our business experts followed suit, designing a system that split up mortgages so that risk could be managed. However, their mechanism was so complicated that it could only make sense when markets were relatively stable. (Yes, these bozos thought markets could only go up and up, forever.) It was doomed to chaos when markets spiraled out of “equilibrium” or its real-world makeshift equivalent.

Most experts look like fools now. Let’s remember this, as we go forward. Advice-taker, beware.

Bankruptcy of Policy Smarts
Speaking of bad advice, look to our political class.

Right away George W. Bush provided the “money” statement: He said we should solve the problem immediately, worry about its causes later.

You cannot solve a problem you do not understand.

The underlying cause? The house of cards the experts built was erected on the basis of federal policy. For decades, the federal government has been trying to “put people into houses” that they could not afford. It has been a multi-pronged effort. Hence the many prongs provoking our current pain.

I am not the one to debate all the alleged “solutions.” But I know enough to be suspicious of most. Investor Jim Rogers’s statement — that America, with its multiple bailouts is already “more communist than China” — is worth thinking about.

Our leaders, of course, would sell us into socialist slavery in a blink, if it gets them re-elected. In fact, that appears to be exactly what they are doing.

The Looming Federal Bankruptcy
This is just the tip of a Titanic iceberg. The current crisis is nothing compared to the likely bankruptcy of the United States government itself.

Deficits soar. Neither major-party candidate plans to balance a budget in his first four years. The debt balloons. And now our politicians add multiple multi-billion-dollar bailouts onto this mess.

Meanwhile, journalists question political candidates as if the mortgage crisis and the attendant liquidity crisis were the worst thing we can imagine.

Much of the panic in Washington may (just perhaps) be based on the fear that the current market implosion will usher in the government’s own, much larger bankruptcy. And yet massive bailouts — piling debt upon debt — make the doom scenario not only more inevitable but also more imminent.

It would make more sense to kill cats.