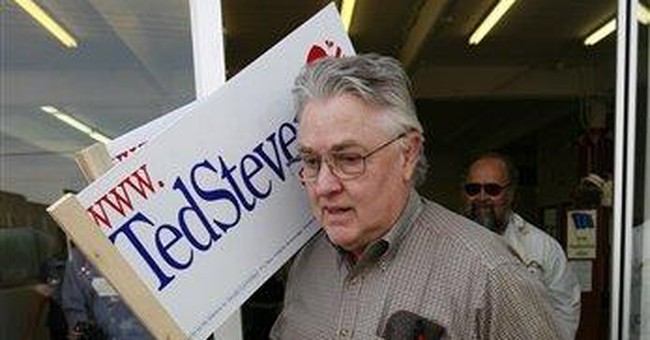 How do you build a monument to a senator?

Well, you whittle away everything that doesn’t look like a senator.

Unfortunately, statuary is out of fashion. Today’s trendiest and most powerful senators don’t want their likeness carved — they want to carve huge chunks out of the federal budget to devote to their gigantic projects.

Take Senate President pro tempore emeritus Ted Stevens. We can forgive the indecency of an airport named after him — perhaps. It was, after all, the Alaska State Legislature that changed the name of the Anchorage International Airport to the Ted Stevens Anchorage International Airport, after Stevens survived a plane crash there, losing his first wife in the tragedy. It’s harder to forgive the current Senate President pro tempore, Robert Byrd, for all the buildings and bridges and such named after him. He worked hard in the Senate to put his grandiose projects up, to his own . . . unintended ignominy.

But let’s not be too easy on Ted. The man has done so much for pork barrel spending in his state he might as well be dubbed Snorts Cooper. Alaskans, known for their hardy individualism, are the biggest recipients of federal largesse in the union. And it is Ted Stevens who did this for them; it is Ted Stevens who turned the The Last Frontier into the current Queen of Federal Project Welfare. (Though let us not forget his great ally in this, his younger colleague, Don Young. Young, Alaska’s sole House rep, has tried mightily to out-pork Stevens, and has been instrumental in bringing some of Stevens’s more recent porkfest projects to fruition, or at least notoriety.)

The two shining examples of Stevens’s attitude towards federal spending are the notorious Gravina Island Bridge and Knik Arm Bridge projects, the infamous “bridges to nowhere.” Not only were they unnecessary, and not only were they to be paid for by American taxpayers at large rather than the state taxpayers who might be said (with some laxity) to benefit from said bridges, Ted Stevens also insisted, in 2005, that they still be funded even after Hurricane Katrina damaged parts of the Louisiana infrastructure that desperately needed help in repair.

You cannot call Stevens an impartial figure. He is the old-fashioned type of politician. He serves his constituencies first, America second.

Well, make that “America third.” If at all.

For whom does he really serve first?

His own sense of self-importance.

And we know this by looking at his general career. We didn’t need help, really, from the recent indictments brought against him for a particular kind of corruption.

Over a year ago, on July 30, 2007, federal agents raided his home, looking for information on his recent renovation. Precisely a year later, he was indicted for failing to report over $250,000 in gifts. Among those gifts was a major upgrade on his house, courtesy of one of Alaska’s biggest oil field contractors.

That same contractor had found himself indicted the year before.

The allegations fit with Stevens’s career; they’re hardly unexpected. He’s a player. He knows how to move money around. And he doesn’t feel bound by the principles of the Constitution (he’ll spend money on nearly anything, enumerated powers notwithstanding) or by the principles of current law (to be proved in court). He goes about doing what he thinks he should be doing, which is moving huge chunks of money from U.S. taxpayers in general, and distributing those monies to his state, or his cronies in the state, in the form of special projects.

It may be that one or two of the favors finagled for his state were in the national interest. Perhaps a Senate that abided by the Constitution would have thrown him one or two of the thousands of bones he’s been given.

But that speculative gimme doesn’t justify his career. Or his methods. Or his tantrums in the Senate when his way gets temporarily blocked.

Only an old hack like Ted could have accumulated so much power over the years to push through so much pork, like those two bridges, like a hundred other bits of nonsense. Ensconced for years in a safe seat of power, one form of corruption begets another. The one can seem just as natural a part of the political landscape as the other.

In a republic, citizens must be ever vigilant against all forms of corruption. That’s why we must oppose pork spending on principle, even if tempted otherwise by politicians. And that is why we must push, now more than ever, for constitutional limits on terms of service for our national legislators, as well as requiring our legislative servants to specify precisely which words of the Constitution grant them the power to do what they demand. In every instance.

Indeed, we must whittle away everything in a politician that looks like corruption.

When we’re done, what we’ll have will look nothing like Ted Stevens.