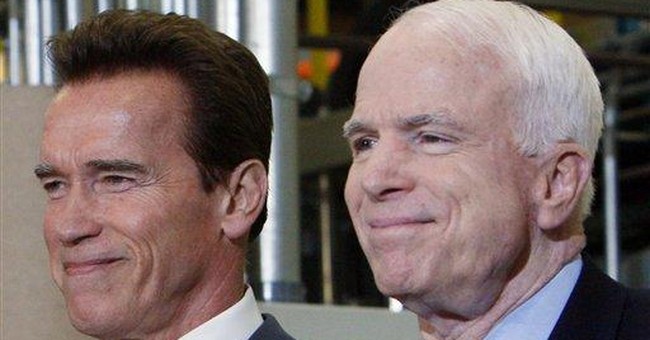 Next Tuesday may or may not be super, but it will definitely be important. Not only will Super Tuesday likely offer a decisive advantage to one of the candidates vying for both parties’ presidential nomination, it may also tip the balance on a key issue, one hated by politicians as much as it is loved by citizens: term limits.

On Tuesday, in addition to the presidential primary, California voters will cast ballots for or against Proposition 93. Pollsters with California’s Field Poll explained recently, “as voter awareness of the initiative has increased, there has been a decided decline in Yes-side support and an increase in voters intending to vote No.”

Elections are supposed to be about issues and ideas. Not tricks and scams. But when it comes to term limits, politicians and special interests know that their only hope is to fool the voters.

And one must give credit where credit is due. Assembly Speaker Fabian Nuñez, Senate President pro Tem Don Perata and the special interests, who have funded this proposition, have outdone themselves. Prop 93 is Incumbent-Protection Scam 6.0 — the slickest, most cunning trick yet devised by career politicians and their buddies.

Prop 93 pretends to make term limits stricter, which they know voters will favor. But the measure actually doubles the length of time politicians can serve in the Assembly, from six to twelve years, and increases permitted tenure in the Senate by 50 percent, from the current eight years to twelve. So while emphasizing the slight reduction in the overall limit, from 14 years to twelve — which impacts only the very few — the politicians behind the measure hope to slip through the fact that it will allow everyone — especially current legislative leaders — to entrench themselves in office.

But don’t take my word for it. Listen to a supporter of Prop 93, Scott Wiener, chair of the San Francisco Democratic Party, who wrote recently, “The reduction in time from fourteen to twelve years should not raise alarms for progressives, given that this reduction only applies to a few fortunate legislators.”

Needless to say, the Yes on Prop 93 campaign isn’t putting it quite this way in their TV ads. Instead, they try to pretend they are supporters of term limits, who want to “improve” them. But while they constantly talk of the measure “cutting terms from 14 to twelve years,” they also admit the real purpose: “More time [uh . . .] to solve problems.”

And while the politicians and special interests favoring the proposition are outspending the No side by more than $10 million dollars ($17 million to a tad over $6 million), they also aren’t explaining the “transition period” to voters. The transition period is to allow the current leaders, Nuñez and Perata, as well as 40 other members of the legislature, who are set to be termed-out of office to stick around for another four or six years.

In one of the more blatantly self-serving arguments for Prop 93, Governor Arnold Schwarzenegger flip-flopped urging voters to “make a little adjustment, so we give those guys an extra few years, so they gain more experience so we can work together. I need those guys now.”

Come to think of it, the Governor’s pathetic morphing from Terminator to “needy guy” is yet another great argument for term limits.

Want more? The largest donor to the Prop 93 campaign is the anti-term limits California Teachers Association. According to the group’s president, David Sanchez, “The California Teachers Association believes California voters should have the right to support or oppose any candidate for political office and should not be denied the opportunity to vote for the candidate of their choice because of artificial barriers such as term limits.”

It’s really nasty enough to attempt to hoodwink voters. But supporters of Prop 93 have even less shame. They’ve regularly attacked those of us who favor term limits in Orwellian terms, for instance calling me the nation’s leading “opponent of term limits reform.” I am used to being called a leading proponent of term limits, so this charge does have the sting of novelty. But the logic behind the rhetoric is clear:

• Reform being good, I now get characterized as being “against reform”

• Which reveals the politicians’ hidden definition of reform: destruction

In just this way down is up, war is peace, and a liar is an honest man.

As Lew Uhler, president of the National Tax Limitation Committee and a co-author of Proposition 140, which established California’s term limits 18 years ago, put it, “Hell hath no fury like a legislative leader about to be termed out of office.”

While most citizens around the country contemplate this weekend’s Super Bowl party or whether they have something clean to wear to church, the power elite in Sacramento (and the 14 other term-limited state capitals across the nation) are all atwitter awaiting Tuesday’s California result, hoping their latest scheme will work.

If it works in California, expect incumbents in all the other term-limited states to attempt the same scam: Pretend to be cutting time for politicians while actually expanding it.

But it won’t work. Term limits are here to stay. And that’s truly super!