Justice Comes For The Cardinal

Paul Greenberg
|
Posted: Aug 10, 2018 12:01 AM
Share   Tweet
The opinions expressed by columnists are their own and do not necessarily represent the views of Townhall.com. 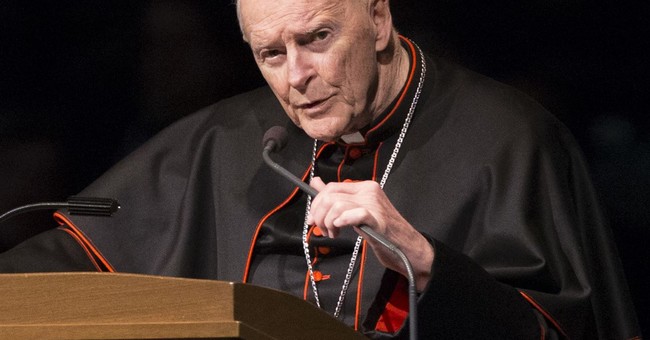 Theodore Edgar McCarrick got away with his act for decades as he rose through the ranks of the Holy Mother Church, covering up not only his own sins but those of others as he foisted errant priests on innocent congregations.

To outward appearances, the cardinal was having a successful career as a leading statesman and administrator. But count no man a success till the day of his death, and now his pretenses all seem to have caught up with the 88-year-old cleric. He had quite a ride to the top of Roman Catholic ranks, but he must not have dared look down.

And now he's fallen to the depths, sentenced to a "life of prayer and penance." He's still a priest for now--but, pending the outcome of his formal trial, he's forbidden to exercise any public ministry. And he'll no longer be called on to advise the Holy Father or travel on behalf of the pope.

All too late the Cardinal offered his resignation to the pope after an investigating committee substantiated allegations that he had sexually abused a teenage altar boy, and that kid, now a grown man, seems to have been only among the first in a long series of victims to be mistreated by this predatory priest. It's an old, old lesson this now disgraced figure in the Church had taken advantage of: Be sure your sins will find you out. No matter how long it may take. Or how many people have been fooled by your high place in society. Now, 47 years after he'd served as a priest in New York, he has been unmasked at last as a serial abuser of both boys and young seminarians.

How are the mighty fallen, and now all this prelate's sins are being recounted in detail in the public prints for all to see and gossip about. There's a long history to these kinds of scandals, dotted with decidedly maculate misconceptions about how the Roman Catholic establishment should handle such embarrassments. For instance, the resignation of the French prelate Louis Billot from the College of Cardinals in 1927 came about not because of any sex scandal but because of his political differences with the Holy See.

Just where church law ends and the civil code begins has long been a gray area. For there is both a city of God and a city of man, and the Church belongs to both. Just as citizens of this country are subject to the sovereignty of both state and federal governments.

The Church offers a useful principle to follow in cases where jurisdictions clash. It is called subsidiarity, and its essence is to let the smallest unit of government capable of judging such disputes handle them. And to have the secular authorities step in when or even before the Church has had its blessed say. Note the case of one Keith Patrick O'Brien, who waived his rights and duties as a member of the College of Cardinals in 2013 after accusations against him of sexual wrongdoing emerged, yet he remained a cardinal until his death back in March.

Alas, this story is bound to continue for as long as the Church puts off establishing a court that would deal with accusations against bishops or cardinals. It's still unclear just which tribunal within the Church if any will finally decide the fate of Theodore McCarrick, and until it has such a body, his case will linger like a bad smell.

To quote Terence McKiernan, a student of how the Church handles or rather mishandles cases like Cardinal McCarrick's, there still exists no clerical court to deal with cases like his. Let's not forget that procrastination, that thief of time, can be a sin, too. Pray for the Church, for it too appears to be much in need of divine guidance.