Paul Greenberg
|
Posted: Aug 24, 2017 12:01 AM
Share   Tweet
The opinions expressed by columnists are their own and do not necessarily represent the views of Townhall.com. 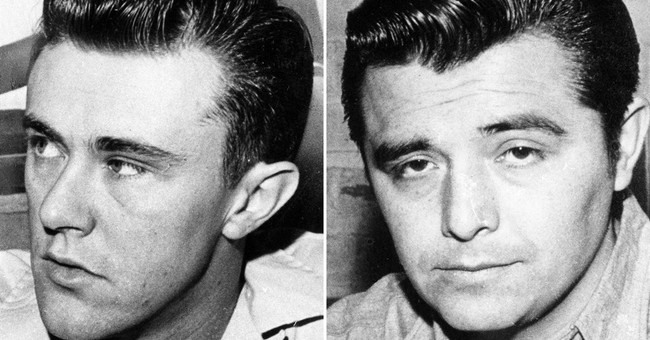 Let us praise Arkansas circuit judge John Fogleman for releasing the blood-chilling testimony over the years of two schoolboy killers who went on a rampage at a middle school in this state in 1998. Since then, the story of Mitchell Johnson and Andrew Golden -- and their victims -- in Jonesboro, Ark., has become a familiar one all over the country. Its essence has been known since Truman Capote told it in his best-seller "In Cold Blood," about the murder of a farm family in Kansas, where he and his childhood friend Harper Lee traced the killers' every step.

But it's good to have at least one moral of this story confirmed: Kids who think of themselves as the stars of some grandiose and bloody movie need to be watched -- very carefully. They're budding confidence men who may fool themselves most of all, but their sad saga should be the stuff of psychiatry journals, not the daily papers. At last check, they're the only two mass killers still alive and not behind bars for those crimes. Others, like the Columbine killers, are dead and make the news only sporadically these days, usually as part of a story looking back. Which is a lot easier on Gentle Readers' nerves.

Judge Fogleman awarded each of the families of those slain in Jonesboro $30 million in damages, having to know they would never see a penny of it but just to make sure the killers would never profit by their crime -- say, by writing a best-seller of their own about it. So says Bobby McDaniel, who represents the families of the victims in a civil suit against Messrs. Johnson and Golden. The purpose of Judge Fogleman's decision, says Counselor McDaniel, "was, hopefully, to provide psychologists, sociologists, school administrators and police any idea of what a school shooter looks like. We wanted them to see if any students show any traits, to be vigilant." For to be forewarned is still to be forearmed.

By now, not surprisingly, Mitchell Johnson is doing time in a federal prison in Texas on theft and drug charges, while Andrew Golden is living in Missouri under the name of Drew Grant, Grant having been the maiden name of his grandmother.

How some things have changed and others haven't since Mitchell Johnson and Andrew Golden were 13-year-old and 11-year-old boys. But lest we forget, other names need to be remembered for entirely different and wholly sympathetic reasons --those of 12-year-old Paige Herring, 11-year-old Britthney Varner, 12-year-old Stephanie Johnson, 11-year-old Natalie Brooks, and 32-year-old Shannon Wright, a teacher. And there were the 10 other students who were injured. None will or should be ever forgotten.

Mitchell Johnson says he's had to deal with who he is and what he's done "every day of my life," complaining about the jobs he's lost and the death threats he's received. Both shooters claim religion now, and how can any mortal dispute their claims? Anything can be forgiven by an authority higher than Judge Fogleman's earthly court. But that doesn't mean we are all equally sinful.

But all of that remains to be seen. Like so many other aspects in this cautionary tale.