What Ever Happened To Letter Writing? 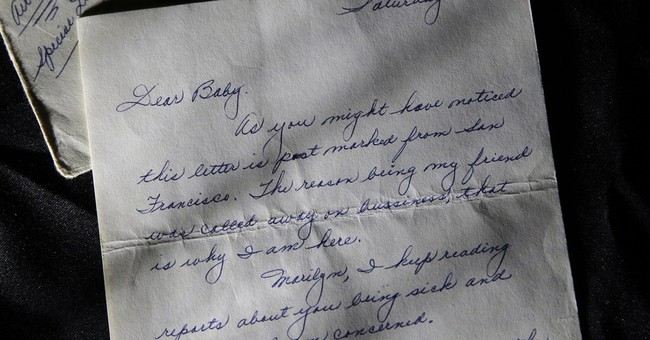 "We are letter-writing. It's a bad habit."

It's as remarkable a book as its author: "T.E. Lawrence: The Selected Letters." Indeed, there's no putting it down. What a change and delight to read literate letters in this illiterate era, even if they were written in another. By a military man at that. Although "military man" scarcely suffices to describe Col. Lawrence, the fabled Lawrence of Arabia, who was also a scholar, gentleman, amateur par excellence and champion if not inventor of the very idea of an Arab nation.

Englishmen, or at least Englishmen of the Oxbridge generation, had a love not only for the desert but a fascination with the once nameless nomads who wandered it. Add the dry English sense of humor that seems to pervade Lawrence's every well-wrought line, and, tell me, does anyone -- or at least anyone in our time -- write like that anymore?

What a treasure and revelation the colonel's letters remain. A kind of Gresham's Law (bad money drives out good) has come to govern modern communication as Twitter, Facebook and all the flashy rest have driven out the long, discursive letter meant to be savored and saved.

In contrast, there are the straight-faced, unintentionally comic words of the book's editors. To quote from their introduction to this collection of classic letters:

". . . . it is clear that some of the claims made about Lawrence, for which he has been much derided, are in fact true. When researching their biography, "The Secret Lives of Lawrence of Arabia," Phillip Knightley and Colin Simpson decided to check whether Lawrence had been offered, in 1934, the Secretaryship of the Bank of England. They wrote to the Bank and were informed that no record could be found of his having been offered the Secretaryship, but he had once been considered for the post of night porter (as indeed he had, see pp. 379-382). They used this reply to support the statement in the opening pages of their book that 'any attempt to take a cool look at the Lawrence legend dissolves into a quicksand of hearsay, rumor and fantasy.'

"However, in December 1986, clear evidence that such an offer was actually made was put up for sale at Sotheby's in the form of (i) a letter by Lawrence to the Hon. Francis Rodd -- Rodd had sounded him out on the Bank's behalf -- refusing the offer, (ii) an explanatory note by Rodd describing how the offer came to be made, and (iii) a letter by Sir Leslie O'Brien, former chief cashier of the Bank of England, promising to 'stop saying that the only job he [Lawrence] was ever offered was that of night watchman.' "

Others had dismissed as fanciful the notion that Lawrence was once asked to head Britain's home defense, but as it happens he was invited to attend a high-level meeting of Britain's political leaders called by Lady Astor at Cliveden to discuss that very possibility -- but, sick of policy and politicians, and still seeking anonymity as just an enlisted man in the RAF, Lawrence declined the invitation. He died May 19, 1935, from injuries suffered in a motorcycle crash six days earlier.

But we still have these wonderful letters as well as his masterwork, "Seven Pillars of Wisdom."

What ever happened to the literate letter? My theory: Just as impersonal war-by-drone has taken the place of the gallant cavalry charge, and the professional, all-volunteer army replaced the citizen-soldier, so the blunt, bullet-pointed email replaced the letter, which became as rare as Victorians in the Jazz Age.

Yes, this country and age has had its daring military leaders, too. Think of David Petraeus, the general who devised, urged and carried out the Surge in Iraq -- over the opposition of just about every member of the American establishment from Hillary Clinton to Barack Obama, both senators then. Gen. Petraeus had only the support of one American leader, George W. Bush, which was all he needed to turn the war in Iraq around and lead America and our Iraqi allies to victory.

But the general, a career military man, is no writer; his memoirs are dry as dust. So does professionalism kill art. (Grant's memoirs and Caesar's may be the outstanding exceptions to that drab rule.) The next president, Barack Obama, would snatch defeat from the jaws of victory. Declaring the war in Iraq over, he removed all American troops there, but now is having to send them back into the Middle East to fill the power vacuum their departure left. Because he lacks the one thing a president and commander-in-chief must have to secure victory rather than just declare it: constancy of purpose.

In the end, Col. Lawrence grew disgusted with how his country had wasted his great victory in the sands and retreated into a welcome anonymity. But not before leaving us these letters that are as remarkable as he was.