The Word From Huey Long 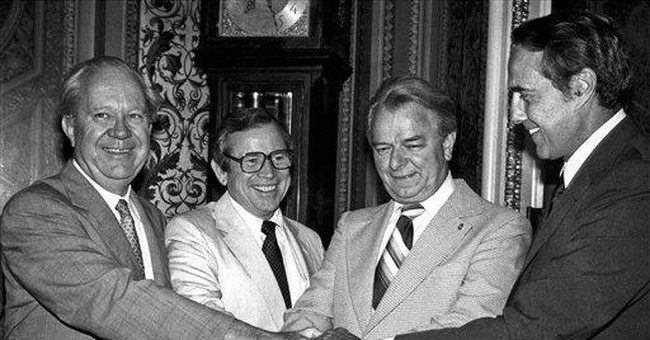 So what's the difference between the leading contenders -- for now -- for the Democratic presidential nomination? The lead could change any day or even hour, but in the middle of last Tuesday evening's rambling kumsitz of a debate that seemed to go on even longer than it did, something Huey P. Long once said came to mind.

The late great Huey Pierce Long Jr. of Louisiana had it all figured out long ago. Back in his heyday, namely the 1930s, Senator/Governor Long would tell a story about a traveling salesman who offered two varieties of a popular patent medicine: High Popalorum and Low Popahirum.

The first was taken from the bark of a tree from the top down. The other came from the bark of the same tree cut from the bottom up. Huey's conclusion: The only difference he'd found between the two types of politicians this country produces is that "one of them is skinning us from the toes up and the other from the ears down."

Huey's cynical theory was -- and remains -- a common enough thought but nary so well expressed. It would apply just as well now to the supposedly crucial policy differences between Hillary Clinton and Bernie Sanders, her chief rival for the moment. The more things change, it seems, the more they remain the sad same -- even if our present-day politicians lack Huey Long's ability to sum things up in a single colorful phrase.

If the Kingfish was an aspiring tyrant with his eye always on the next rung up the political ladder, he was also a keen judge of his fellow politicians -- and their tricks.

More high popalorum and low popahirum is sure to come as the next presidential election approaches -- like a mudslide.

To borrow another metaphor from Huey Long, the essential difference between the two Democrats fighting it out for a transient lead in the polls is that one is a hoot owl and the other a scrootch owl. What's the difference? Here's how he explained it:

"A hoot owl bangs into the nest and knocks the hen clean off and catches her while she's falling. But a scrootch owl slips into the roost and scrootches up to the hen and talks softly to her. And the hen just falls in love with him, and the next thing you know, there ain't no hen!"

Hillary Clinton is definitely a scrootch owl. She's become cool as a bushel of cucumbers over the years as she's gone from young firebrand to seasoned pol. In contrast, Bernie Sanders is all fuss-'n'-feathers as he attacks capitalism, rails against The System, and generally raises Hell, explaining how much better Democratic Socialism would be -- and citing little Denmark as his ideal society. He leaves it to the old scrootch owl, Hillary Clinton, to point out that Denmark is not the United States -- and who can argue with that? Her geography is impeccable.

Ol' Huey had 'em both figured out long ago. One specializes in high popalorum, the other in low popahirum.