It Can be Done -- We've Done it Before 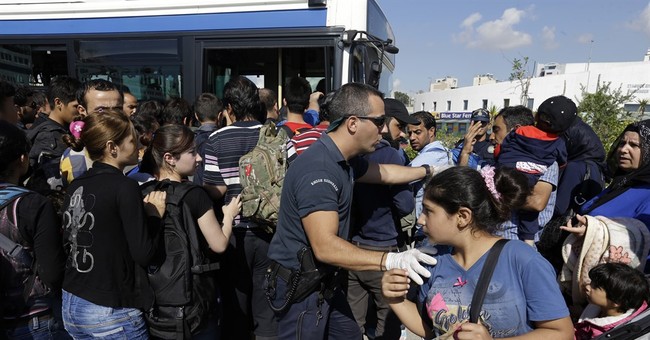 Give me your tired, your poor,

Send these, the homeless, tempest-tost to me,

I lift my lamp beside the golden door!

--Emma Lazarus, "The New Colossus," inscribed on the Statue of Liberty

But now American leadership only echoes European apathy. We're told there's nothing much to be done, or at least only a token gesture to be made, as a vast tide of refugees seeking to escape Syria's ever-expanding civil war courses through Europe, jumping fences, climbing aboard leaky craft setting sail on perilous waters, and doing whatever is necessary to escape the turmoil in the Middle East.

Americans can scarcely deny our own responsibility for setting this maelstrom in motion. For how many years now -- four? -- has Washington ignored this conflict that has killed hundreds to thousands and left many more homeless? And still they come. When they do somehow reach European shores, countries like Hungary and Croatia turn them back, shuttling them to makeshift camps in muddy fields, and throwing up any other barriers they can devise. While those nations that first welcomed them -- like Germany and Austria -- find themselves unable to handle the tide and slam shut the gates. No more homeless and tempest-tossed for them, thank you. They can no longer handle the human flood. And the crisis only intensifies.

What's to be done? The same thing America and our allies have done before. As when a mining engineer named Herbert Hoover set up his own independent operation -- independent country, really, with its own flag, ships, railroad lines and all the rest -- to succor and settle the refugees left stranded in the wake of the First World War, and succeeded in bringing organization out of chaos, compassion in place of confusion.

It would not be the first time. After the fall of Saigon, soon to be Ho Chi Minh City, hundreds of thousands of refugees (the Boat People, they were called) took to the sea in small boats, hoping to escape the labor camps, massacres and "re-education" the Communists were imposing. Back then this country did not stand idly by, wringing its hands and making excuses. Nor did it try to deny its undeniable responsibility to help those who had helped us fight the war in Vietnam.

Instead this country took the lead in setting up an international conference and world-wide effort to save and resettle all this human flotsam. And succeeded. Peace has its heroes as well as war, and the U.S. Navy's performance in this crisis was heroic. It came to the rescue of all those who had taken to the sea to escape the tyranny and persecution that awaited them on land, asking no questions, just offering aid to these, the latest homeless and tempest-tost.

"We are a nation of refugees," our secretary of state at the time (Cyrus Vance) reminded us, and "we will not turn our backs on our traditions." We didn't. Today those refugees, and their children and grandchildren, are counted among our most productive and patriotic citizens, repaying the foresight of leaders like Cyrus Vance a thousandfold.

An administration that understood the challenge -- and opportunity -- that these Syrian refugees represent would hasten to their rescue and join with our allies to welcome, not disdain, these desperate people, as desperate as any wave of refugees we have welcomed and benefited by before.

But instead Barack Obama, John Kerry and hand-wringing company offer mainly excuses. While a far-seeing administration, one that thought in terms of the next generation instead of the next press release, would show the same can-do spirit that Americans have displayed since Herbert Hoover's time, since the Marshall Plan, since Lady Liberty raised her lamp beside the golden door ... and swing it wide open.

This newest crop of refugees, with all the social and economic capital they bring here along with their spiritual heritage, are a treasure at our gates. As both we and the Europeans should recognize. Instead of fearing. For don't we know them? Haven't we seen their like before? Why, yes. In the faces of our own forbears.