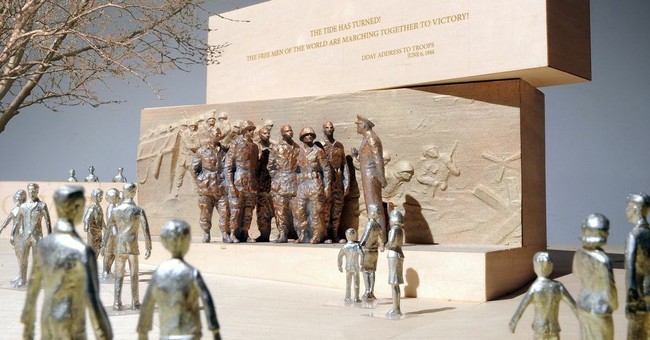 It came as a relief and refreshment to read that some of our more discerning politicians and maybe the American people as a whole are catching on to the endless boondoggle known as the Eisenhower Memorial -- which for the moment is more of a memorial to its over-praised and certainly over-priced architect.

When last heard from, this gigantic irrelevance had gone from metallic monstrosity with no clear connection to the spirit and achievements of a great wartime commander and peacetime president to just another Washington boondoggle.

But the whistle is finally being blown on over-celebrated architect Frank Gehry's monument to himself, which now has been some 16 years in the making -- and which, if there's any justice or sense of fitness left in American architecture, will never be made. At least not in Mr. Gehry's image.

That this was supposed to be a monument to Dwight D. Eisenhower -- a leader known for his simplicity, frugality and complete lack of pretension -- only added another layer of irony to this whole misadventure.

But if this monument isn't worthy of Ike, what would be? For that matter, what's the purpose of erecting national memorials in general? Let us take our cue, and a clue, from the designers of the monument to the heroes of United Flight 93, which came to its fighting end above a field in Shanksville, Pa., that is now hallowed ground to Americans and free people everywhere.

Here is how Paul and Milena Murdoch described their aim--in words that come across more like poetry than PR:

Timeless in simplicity and beauty,

the Memorial should be quiet

in reverence, yet powerful in form,

a place both solemn and uplifting.

It should instill pride, and humility.

The Memorial should offer intimate

experience, yet be heroic in scale.

Its strong framework should be open

to natural change and allow

We want to restore life here,

to heal the land,

and nourish our souls.

In this place, a scrap yard

will become a gateway

and a strip mine will grow

into a flowering meadow.

But more than restoring health,

the Memorial should be radiant . . .

However you would describe Frank Gehry's patchwork of a design for an Eisenhower Memorial, radiant might be the last word you would use. It reduced Ike to a barefoot boy from Kansas surrounded by gizmos, apps and various post-mod "interactive" imagery that would deprive the memorial of any hope of the classical dignity that marks the Jefferson or Lincoln Memorials.

No wonder a congressional committee called the whole project a "five-star folly," and it's been bogged down ever since in bureaucratic infighting. Congress -- even Congress! -- seems to have caught on to what a money-grubbing racket the commission in charge of this memorial has become with its nine full-time staffers reduced to doing nothing much but making excuses for it.

The House, bless its heart and good sense, has refused to appropriate another cent -- not a penny! -- for this memorial's construction or operation until changes are made. Sweeping changes like stopping the whole project and starting again.

The Senate has authorized only $1 million for the commission in charge of the memorial, which is a penny-ante sum in the context of the federal budget -- just to keep the lights on and the offices cleaned at the commission.

The best idea of all is to shut down the whole project and begin all over again with a new competition for a new design. The Senate's got the right idea: No construction should be undertaken "until there is broad support among the public, the Eisenhower family and Congress" -- none of which is evident today.

It would be different if this memorial had the simplicity and grace -- and the power to move us -- of Maya Lin's original sloping lines for the Vietnam War memorial before Congress cluttered it up with a statue here and there.

This country's architects and designers are still capable of great work -- decorous and fitting, gracious and natural -- even if superstars like Frank Gehry and his vast team of consultants aren't. Maybe they're too busy collecting consultants' fees and commissions.

Our history can speak for itself, just as our heroes can be remembered on their own merits if our memorials will just reflect their greatness -- instead of promoting their architects.