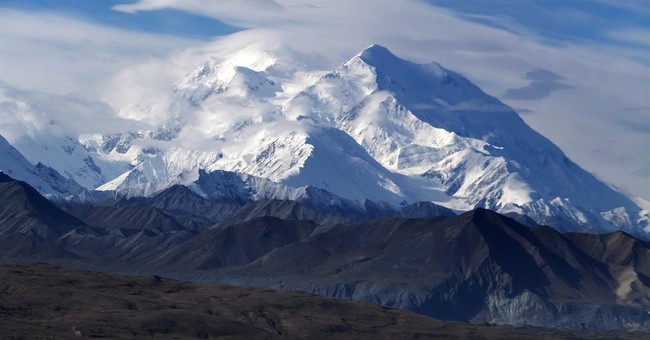 Poor old William McKinley, 25th president of the United States and today's Forgotten Man, is the latest victim of the country's rage for identity politics. First he was assassinated by an anarchist (September 6, 1901) and now he's being erased from the map by executive order. It seems familiar old Mount McKinley, highest peak on the continent, is now to become Denali, as it's called in Athabascan, and maybe it should be. Some of us are in favor of saving every ancient tongue we can, for they are all treasures of meaning. But that doesn't mean we're also for eliminating every trace of the past, that invaluable -- indeed, indispensable -- guide to our future.

William McKinley and his own tribal home -- it's called Ohio -- deserve better. For he did his country a great service when he defeated William Jennings Bryan in the landmark election of 1896. That grandiloquent orator proved the last gasp of America's agrarian past with all its paranoid prejudices and monetary phobias, opening the door to the industrial America of the future with all its promise and prosperity, one based on sound money and solid industrial development.

But who today speaks about respecting the lessons of our history? Perhaps it was ever so. Edward Gibbon, that greatest of historians in the English language, and an unmatched literary stylist to boot, as his "Decline and Fall of the Roman Empire" still testifies, put it this way: "We must consider how little history there is; I mean real authentic history. That certain kings reigned and certain battles were fought, we can depend upon as true; but all the coloring, all the philosophy, of history is conjecture."

Gibbon set out to correct that deficiency, volume after volume, rich and telling detail after detail, chapter after chapter full of irony and wit and a common sense still not common in the affairs of man. And succeeded beyond all expectations in a world more accustomed to mediocre narrative than observation from the commanding heights. That is, a world not unlike our own today.

Gibbon's conclusions, many of which have an offhand genius, could apply just as well to today's America, the new Rome, and they remain as relevant to the human condition. See if you don't agree: "Avarice is an insatiate and universal passion. ... How much swifter is the progress of corruption than its cure. ... The historian may content himself with an observation, which seems to be justified by experience, that man has much more to fear from the passions of his fellow-creatures than the convulsions of the elements."

Current case in point: Even after the effects of Hurricane Katrina were finally cleared away, the incompetence of the politicians, engineers and administrators who were supposed to have prevented and then dealt with that disaster remain raw in memory.

Here is Gibbon on how quickly the use of gunpowder spread in the past -- much like nuclear weaponry today: "If we contrast the rapid progress of this mischievous discovery with the slow and laborious advances of reason, science and the arts of peace, a philosopher, according to his temper, will laugh or weep at the folly of mankind."

Gibbon's description of Roman attitudes toward religion in the empire anticipates American ones in this, the new Rome, centuries later: "The various modes of worship which prevailed in the Roman world were all considered by the people as equally true; by the philosopher as equally false; and by the magistrate as equally useful."

Whatever the claims to truth each approach may have, there is no denying their diversity, tolerance and practicality even today in this old republic become a mass democracy and empire. But the peace between different believers and non- is still kept by respecting the rights of all to believe as they wish.

Our current emperor/president would fit in well with the whole gallery of imperial misrulers who presided over Rome's decline and fall. For he, too, seems a figure devoid of humility before the lessons of the past, whether the futility of appeasing tyrants or the incessant temptation to curry favor with The Crowd and court the great god and bubble Popularity -- before he, too, fades into the past.

To quote Gibbon, "The most glorious or humble prospects are alike, and soon bounded by the sepulchre." Mount McKinley would not seem the only familiar landmark to vanish from our view; a becoming modesty in the face of the past seems to be fading with it.