Of Pens and Swords 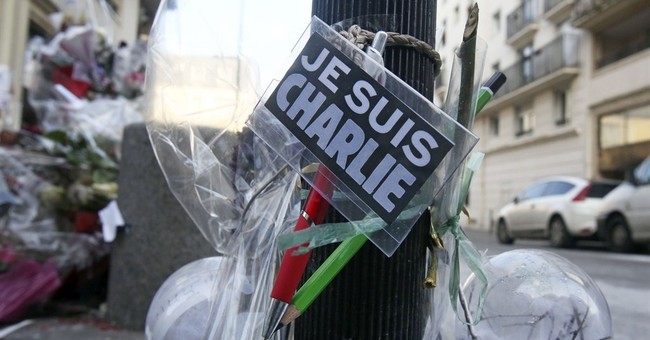 The pen may be mightier than the sword, but perhaps only if it comes with a fully automatic assault rifle with RPG attached. As the staff of Charlie Hebdo discovered when just two assassins took out most of it with only a couple of Kalashnikovs. That's all they needed to make their statement. So much for eloquent principles in the face of ruthless fire power.

Yes, there was a great outpouring of public defiance and brave words ("Je suis Charlie!") as the blood was being washed off the sidewalk outside, but where is all that defiance now? It seems to have wilted, swept away to such an extent that our president still dares not call the enemy by its right name -- lest he be accused of the cardinal sin of our political time: Islamophobia!

That single word is enough to bully editors and politicians on both sides of the Atlantic, not to mention distinguished university faculties in this country, beset by fear and trembling at the prospect of not appearing politically correct.

The decline of the West, its loss of confidence in its own values, principal among them freedom of speech and thought, and its unwillingness to rally to its own defense, let alone take the offense in this war of ideas and more, is scarcely a new phenomenon. It has all too many historical precedents, as when Nazism was the Wave of the Future, and then Communism, and anyone who stood up to either in turn risked being consigned to the Ash Heap of History, and not just figuratively.

Concentration camps and gulags awaited those who showed too great an allegiance to freedom. Those like Alexander Solzhenitsyn, the Russian writer who would not bow either to the forces of tyranny or just the fashionable tendency not to risk defending the Western tradition of free speech and free thought too ardently. Let's not be extremists, shall we? But seek a happy medium between despotism and liberty.

So that when Solzhenitsyn came to deliver a commencement address at Harvard in 1978 at the height of the Cold War, he not only disappointed but outraged respectable liberal opinion, which found his views exaggerated and alarming. It's one thing to say some nice things about the paramount importance of God-given rights in a free society, but to champion them, press them, refuse to compromise their essence, that's, well, something else. That's dangerous extremism.

Yet the Russian sage would not back away from his principles, or the West's. As he told his audience at Harvard, echoing Abraham Lincoln as the great struggle between slavery and freedom in this country approached its inevitable climax:

"The split in today's world is perceptible even to a hasty glance. Any of our contemporaries readily identifies two world powers, each of them already capable of entirely destroying the other. However, understanding of the split often is limited to this political conception: that danger may be abolished through successful diplomatic negotiations or by achieving a balance of armed forces. The truth is that the split is a much (more) profound (one) and a more alienating one, that the rifts are more than one can see at first glance. This deep manifold split bears the danger of manifold disaster for all of us, in accordance with the ancient truth that a kingdom -- in this case, our Earth -- divided against itself cannot stand."

Solzhenitsyn did not stop there. He referred to the deep sickness of soul pervading the material-minded consumerist societies of the West that seemed to have forgotten what the West had always stood for -- freedom, individual rights and everything the Greeks had defended against the Persian empire:

Today, Alexander Solzhenitsyn continued, "a decline in courage may be the most striking feature which an outside observer notices in the West in our days. The Western world has lost its civil courage, both as a whole and separately, in each country, each government, each political party, and, of course, in the United Nations. Such a decline in courage is particularly noticeable among the ruling groups and the intellectual elite, causing an impression of loss of courage by the entire society. Of course, there are many courageous individuals, but they have no determining influence on public life.

"Political and intellectual bureaucrats show depression, passivity and perplexity in their actions and in their statements, and even more so in theoretical reflections to explain how realistic, reasonable, as well as intellectually and even morally worn it is to base state policies on weakness and cowardice. And (that) decline in courage is ironically emphasized by occasional explosions of anger and inflexibility on the part of the same bureaucrats when dealing with weak governments and with countries not supported by anyone, or with currents which cannot offer any resistance. But they get tongue-tied and paralyzed when they deal with powerful governments and threatening forces, with aggressors and international terrorists. Should one point out that from ancient times declining courage has been considered the beginning of the end?"

Sound familiar? How little has changed in the decline of the West since Solzhenitsyn's day. Its declining will to take its stand for freedom as in the olden times, its willingness to sacrifice the independence of small countries to appease aggressive power, all those sound the knell not just for the small nations betrayed, but the cause of freedom everywhere. Let us awake, and save not only others but ourselves.