The Decline of the West, Again 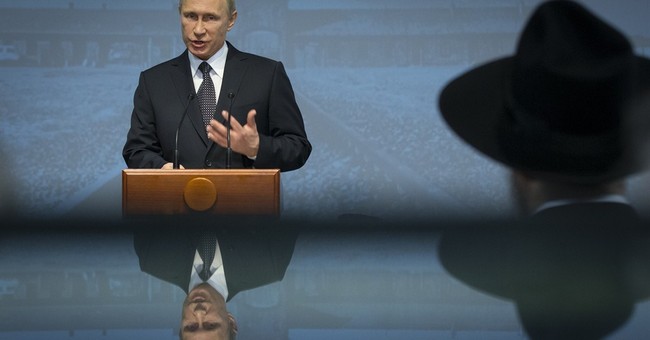 History doesn't repeat itself, but it rhymes. That observation has been attributed to Mark Twain but, much like Dorothy Parker in our time, old Sam Clemens tended to get credit for any saying that is wise, witty and compact. Talk about history rhyming: The unending news dispatches out of Ukraine might as well have been written in rhyming couplets.

These days war bulletins from the confused battlefronts arrive like a montage of blurry old World War II footage from the eastern front as the front lines, wherever they are for the moment, fluctuate. But the suffering and confusion remain the same. Even if the roles of the dead and suffering, the displaced and distraught, are now played by a new generation. While this new, wannabe Stalin sits in the Kremlin, patiently picking off countries and parts thereof to add to his groaning collection.

Vladimir Putin knows there never was a paper protest, the kind Washington no specializes in, that stopped an army, and his -- regular and irregular -- is on the march again, if by fits and starts. It happens every time the West falls asleep, or pretends it can afford to.

The echoes of the past can be deafening sometimes. The airport at Donetsk in eastern Ukraine was reduced to ruins some time ago as waves of troops on the offense, then defense, swept over it as regularly as a daily, bloody tide. The airport's formal name: the Sergey Prokofiev International Airport -- yes, that Prokofiev, the one who composed his stirring Fifth Symphony in commemoration of what Comrade Stalin insisted on calling the Great Patriotic War.

This time the composer's name appeared as a factoid amidst the continuing wreckage of a less than great patriotic war, one between Russians and Ukrainians no longer united. In the meantime, the West mainly looks on, its "leaders" issuing pious statements against aggression but doing all too little to stop it. The decline of the West continues, with the usual dangerous results as the aggressor bides his time, strikes, and then mulls his next sure move.

The diplomatic euphemisms for the West's apathy change from era to era: appeasement, detente and today's favorite, reset. Yet these synonyms for retreat fool no one except those without historical memory, or who deliberately choose to ignore it.

Now there is talk of a new Cold War, as if the old one ever really ceased. It was just interrupted by one of Russia's thaws, preparatory to the next Russian winter.

The bear just waits and watches and, when the time comes, strikes again. It may have been Ronald Reagan who compared Soviet strategy to that of a hotel burglar who methodically prowls the corridors trying every door till he comes to one that's unlocked, its contents his for the taking. As this American administration temporizes and equivocates, all the doors seem to have been left unlocked, and Vladimir Putin can take his sweet time.

After Ukraine, what next -- the Baltics or Balkans, Kazakhstan ... or just wherever Russian speakers still live, depending on how vulnerable each seems at the moment. To quote one Ukrainian observer, "He will wait as long as it takes, and he will act decisively."

This new Stalin has one great advantage that overshadows all the rest, and continues to overshadow the West: constancy of purpose.

Only an occasional Churchillian voice -- like that of John McCain -- raises the alarm, and he must be accustomed to being ignored by now. Just as Sir Winston was decade after decade, till he could no longer be. It was Churchill who once said, never fear, the United States will do the right thing -- but only after trying all the others. But must we still try all the others first? Time runs short.

Washington's diplomacy of indecision doesn't apply just to Eastern Europe and this renewed Cold War, but elsewhere, too. As in the Middle East, where this administration pretends that it won't let the mullahs in Iran get their weapons, and the mullahs pretend to negotiate about them. That arrangement seems quite satisfactory to both sides, though soon enough the mullahs will no longer have to feign an interest in giving up their nukes; they'll have them. Whereupon the administration will have to develop some new pretense to take the place of the old -- containment? -- and the Decline of the West will resume.

Isn't this where we came in? Here's hoping it won't be where, as a beacon of light and security in the world, the West flickers out.