The Death of Opera 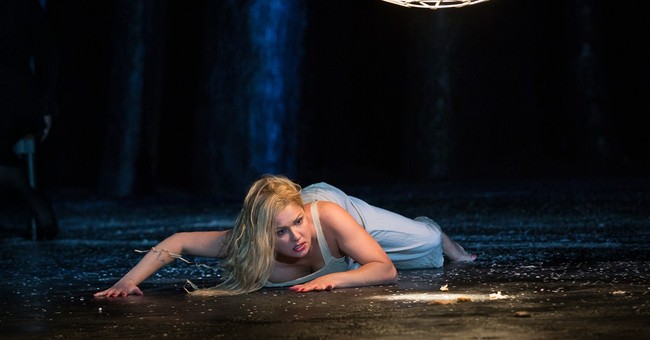 The politics of emotion must appear

To be an intellectual structure.

Creates a logic not to be distinguished

If opera were a game of Clue, the solution to this case would be simple: Mr. Political Correctness did it with a libretto in the conservatory. The victim? American opera, done in by none other than the least suspicious of suspects -- the renowned Metropolitan Opera itself.

The Met is now putting on another opera by John Adams, whose "Nixon in China" became an instant classic. That opera humanized figures long stereotyped, both Chinese and American -- from Chou En-lai to Richard Nixon and even Henry Kissinger. No wonder "Nixon in China" has been hailed as a masterwork.

Any opera that could humanize Dr. Kissinger, that champion of cold, calculating Realpolitik, has to be a work of art indeed.

John Adams' latest work comes with powerful, moving, soulful music, too, as any work of an inspired composer should, and it also depicts an actual event. But there the similarities with "Nixon in China" end.

The theme of John Adams' new opera is an old and familiar one: murder most foul, this time aboard the ill-fated Italian cruise ship Achille Lauro in October of 1985. But its words, unlike its music, have been put through a politically correct strainer, beginning with its title.

That title is "The Death of Klinghoffer," not "The Murder of Klinghoffer," which would have been more accurate. But it would also have rendered a judgment between good and evil. Can't have that today, not in this politically correct era when terrorists may be called only militants or insurgents or radicals (choose your own favorite euphemism) lest their supporters be offended. Or even take vengeance. And today fear rules.

So this latest work of John Adams' sets out to give both sides of the story equal time -- that of the murderers on their mission for the Palestine Liberation Front and that of the Jewish family they robbed of their grandfather and patriarch, shooting him to death and then throwing his wheelchair-bound body overboard. Fashionable people, like patrons of the arts and sophisticated opera critics, aren't supposed to notice that the opera's libretto throws justice over the side with him.

What next -- an even-handed portrayal of German Jews in the 1930s and their Nazi killers? It would be right in line with our morally neutral era, with its aversion to the judgmental, its fear of taking a stand between right and wrong, good and evil.

There ought to be a name for this new sort of opera. Once upon a time grand opera had grand themes as well as grand music -- love and hate, loyalty and betrayal, heroism and villainy ... but this opera's libretto blurs all that, betraying John Adams' music with its morally ambivalent words. Call it petty opera. All things considered, the best title for this work might have been "The Death of Opera."

Its libretto is typical of a deluded age: In the guise of understanding the murderers among us, it winds up giving them a platform. But the only acceptable response to their crime is the same one the police inspector gave the child-murderer in the classic German film noir of the 1930s, "M." The murderer, played by the pitiable Peter Lorre, explains, "Who knows what it's like to be me?" as he looks around for sympathy. But all the inspector says in reply is: "You're under arrest." If only that were all this libretto said. Then it would be a simple act of justice and public sanitation, not an elaborate pseudo-intellectual defense of the worst kind of injustice: murder.

The Metropolitan Opera has every right, so long as this is a free country with a First Amendment, to put on any opera grand or petty it pleases and call it Art. But those of us who are disgusted by its taste in this instance, and its willingness to lend itself to the most dehumanizing propaganda, have a right to speak up, too. As crowds of New Yorkers have done outside the Met. We have more than a right to speak up when evil is cosmeticized, even romanticized. We have a duty.

Among those protesters at Lincoln Center the other day was a former mayor of New York, the one who cleaned up the city after it had reached a low point. To quote Rudy Giuliani, who is also a former prosecutor: "The Met, and those who decide to go see this production, have every right to do so, and it would be hypocritical and anti-American for us to interfere with that and to stop that," he said. "They have that right. But we also have a right, just as strong and just as compelling, to point out the historical inaccuracy and the historical damage this contributed to." And that's just what the former mayor has done: speak up. Along with all those who have raised their voices in protest against one more abomination billed as Art.

The Met itself tacitly acknowledged the aid and comfort this petty opera has given haters around the world by canceling its plans to transmit "The Death of Klinghoffer" to a broader audience. Just as it has transmitted other productions. To quote Peter Gelb, the Met's general manager: "I'm convinced that the opera is not anti-Semitic. But I've also become convinced that there is genuine concern in the international Jewish community that the live transmission of 'The Death of Klinghoffer' would be inappropriate at this time of rising anti-Semitism, particularly in Europe."

What a neat formulation -- at least if the general manager's aim is to avoid responsibility for what he's done. But what does it mean, exactly -- that he himself recognizes putting on such an opera at such a time is, uh, inappropriate, to use the current understatement for countenancing evil, or that he is only bowing to the judgment of a pressure group ("the international Jewish community") in not giving the opera even wider distribution?

Can the gentleman mean that it's "appropriate" to produce this same opera on the stage of the vaunted Metropolitan Opera but not on film? Is there some magic in the air at Lincoln Center that disinfects anti-Semitism? Your guess is as good as mine. This much is clear: His is the kind of PR-speak that's really not worth all the trouble of parsing it.

"The Death of Klinghoffer" would merit comparison to the work of the talented Leni Riefenstahl, the moviemaking celebrant of her fuehrer's Third Reich, if only the opera were as well crafted as her "Triumph of the Will" -- or if it had the emotional appeal of her films glorifying the annual Nuremberg rallies staged by the Nazi Party, films that made you want to rush out of the cinema and join those goose-stepping ranks. They were the Wave of the Future!

Not so "The Death of Klinghoffer," with its studied neutrality and air of self-importance. It is less art than agitprop.

Those of us disgusted by this libretto can only echo the accusation that the opera's Marilyn Klinghoffer hurls at the captain of the Achille Lauro, who's been respectfully and even sympathetically negotiating with the murderers aboard his ship. When the ever-neutral captain must tell her that that her husband has been murdered, and his wheelchair-bound body thrown into the sea, she shrieks at him: "You embraced them!" Which is what the Metropolitan Opera now has done, too.

Whatever the Met's position or lack of one on the controversy this opera has set off, consistent it isn't. Its general manager is either a brave fighter against artistic censorship or someone who panders to it. He can't have it both ways, hard as he tries to.

The undeniable truth is that Mr. Gelb has compromised both himself and the Metropolitan Opera, but like many of those who make moral compromises, he'd rather call his actions something else. Like statesmanship or prudence or balance or détente ... or just presenting both sides of the question. There are any number of high-sounding excuses available when one sets out to compromise with Evil.