The Age of Spam 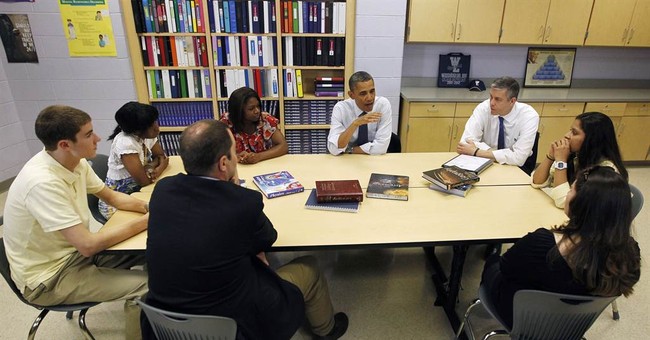 Trending
Consider this an object lesson and fair warning for all those other states that are trying to what they can to improve education or even cut through the bureaucracy that seems to cover it everywhere -- like kudzu.

Here in Arkansas, our never-give-up reformers came up with a simple way to let parents, teachers, schools boards, taxpayers and anybody else who's interested -- and we all should be -- know how good a job their neighborhood school is doing. That's right -- the school where little Johnny or Judy goes. Just give each school a grade, the kind you might be familiar with from your own school days: a grade from A to F. Clarity at last!

The only surprise is that it should have taken a mere 10 years -- and an act of the state legislature -- to wake up the state's Department of Education and get it to assign public schools simple, clear letter grades. For there's nothing an encrusted bureaucracy detests like simplicity. Unless it's clarity. But our educrats have finally had to give simple letter grades to schools. Instead of the confusing mounds of verbiage they're used to dishing out, and which did more to confuse than enlighten those of us who just wanted to know how well our neighborhood school was doing.

There's nothing that seems to upset our educrats more than folks wanting simple, easy-to-understand information. All of us amateurs -- parents, teachers, school boards -- may just get in their way. The certified educationists in this state's Department of Education would doubtless prefer to just be left alone. So they can go on preserving the status forever quo. Maybe that's why, instead of providing intelligible information, they churn out pages and pages of obfuscation. It may all have a purpose. The same purpose camouflage serves in war.
CARTOONS | Steve Kelley
View Cartoon

But the professional obscurantists that dominate so much of the educational bureaucracy weren't about to give up so easily. They came up with enough "explanations" of this new, simple system of letter grades to defeat the whole purpose of this reform, which was to make rating a school easier to understand, not harder.

It took our ace education reporter here at the Arkansas Democrat-Gazette a dozen or more paragraphs to explain this new, "simpler" system of rating a school. Complete with forays into mathematical formulae and other such minutiae. And in the end our reporter may only have skimmed its muddy surface. How could even the most lucid and concise of reporters explain a collection of indigestible prose that is neither? But our reporter made a brave attempt at it.

Her first paragraph, as loaded with numerical complications as the dozen others, began: "Each of the components of the grading system requires its own set of calculations. For example, to determine the number of points earned by a school for student performance, the number of students who earned a 'basic' score on state-required Benchmark and End-of-Course math and literacy tests would be multiplied by 0.25...." And so on all the way to her summation:

Let's just say the sheaf of explanations that this state's Department of Education issued along with the new rating system isn't quite as simple as A, B, C, D and F. It's closer to Heisenberg's Uncertainty Principle. Indeed, the essence of the educrats' approach to rating schools may be just the same: uncertainty. Clarity can be the enemy of job preservation in a bureaucracy. Who'd need all these swamis and gurus in the bureaucracy to explain the system if it were self-explanatory? Like letter grades.

A columnist might as well try to explain Obamacare with all its never-ending clauses, exceptions, waivers and ongoing changes simply. It's a challenge. Like a biologist trying to pin down a virus even while it's mutating.

Called on to explain the sloppy job the Secret Service has done protecting the president, the now former director, Julia Pierson, provided not so much an explanation as an evasion. As if her aim had been to recite her talking points (aka cover story), submit her resignation, and fade quietly and quickly away with her generous pension. If so, she accomplished all that in short order. And hasn't been spotted since, as if she were just another intruder in the White House.

Ditto, the notorious Lois G. Lerner of IRS fame, or rather infamy, with her enemies' list of right-wing/Republican/pro-Israel groups who were singled out as ineligible for the usual tax exemptions. She took the Fifth, lost the emails that detailed her machinations, resigned with her pension intact (a cool hundred grand a year) and disappeared into the woodwork. Nice non-work if you can get it.

Now the experts at the U.S. Centers for Disease Control and Prevention, who earlier had assured all of us that Ebola was under control in this country, have disclosed that it isn't. As illustrated by the curious case of the young nurse in Dallas who came down with it after she'd helped treat an Ebola patient who died after arriving here from Liberia; she now has been moved to a biohazard containment center at the National Institutes of Health at Bethesda, Md.

Then came the news that a second nurse at the same Dallas hospital had been stricken; she's been moved to the isolation ward at Emory University in Atlanta, which has done such a good job of treating other Good Samaritans stricken by this plague. Don't be surprised if more such cases start appearing on these shores. Viruses don't respect international borders. It's not as if they need a passport.

For a moment even the somnolent New York Times roused itself to the danger: "Reassuring statements by health officials that virtually any hospital with an isolation unit could treat such patients now look rashly optimistic," the Times realized, before nodding off again: "That said, the risk that the Ebola crisis might cause outbreaks in this country remains small." So relax, America, for the experts have everything under control.

There are times when it pays to note what even the more hysterical types among us are saying; they may get carried away on a regular basis, but they also may have somehow acquired a little purchase on a small sliver of the truth.

Panic can be as infectious as the disease itself, which is why the "experts" would have done better not to sound so sure when they minimized any chance of Ebola's spreading to these shores. But there is no end to such non-assuring assurances out of our experts, who may not be quite as expert as they claim to be.

The public trust is too valuable an asset to risk by indulging in false assurances. Or any of the many evasions and equivocations disguised as explanations from the certified, capital-E Experts; they fill up my inbox any morning I dare open my emails. ("What the 2014 Oil Crash Means ... When Meetings Matter: The World Bank and IMF Convene ... Marketing: 5 Tips for Writing Better Emails to the Media...")

The Age of Spam, aka The Era of the Experts, rolls unstoppably on, a great sea of sludge that offers the reader everything but clarity. For why give the suckers an even break? Better to confuse 'em and so hope to hide from the most dangerous enemy of all well-entrenched bureaucrats: accountability.