Who is This Man? 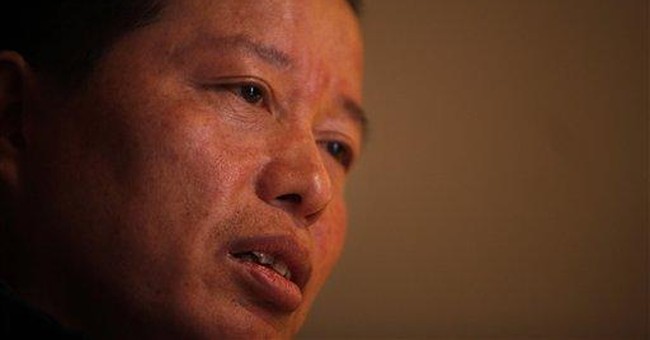 If you don't know who Gao Zhisheng is, welcome to the vast club. It may take a moment, maybe a fleeting reference in the paper, to call up his name and dossier. He's just one of the anonymous masses toiling away in Communist China's empire of slave labor camps. Or at least he was till he was released sometime last month. Which is about the only occasion on which an inmate may get a moment's notice from the comfortable rest of us. Then he makes the news. Otherwise, the only release is provided by death.


If, like me, you didn't recognize the name, at least not for a moment, that's just the way The Authorities on the Chinese mainland want it. One object of locking up such political undesirables, besides torturing them to death, or maybe worse, a living death, is to reduce them to an unperson, someone unidentified and unidentifiable, so there's no danger of his infecting others with anything so dangerous as an idea. Just have him disappear. Become non-existent. Or better yet, blot out any trace of his ever having existed.


Gao Zhisheng, born 1964, in Shaanxi Province in the northwest, descended from a family of coal miners, served in the People's Liberation Army, admitted to the bar in 1995? Never heard of him. You must be mistaken. There was never such a person.


George Orwell's "1984" may still be the best guide available to a communist or any other totalitarian society. No wonder we were forbidden to bring a copy with us when our group of American editorial writers toured Russia back when it was still the Soviet Union in the 1980s.


In any list of the neo-words George Orwell gave us with his invention of newspeak, Unperson must rank high. It retains its relevance every time a name like Gao Zhisheng breaks though our apathy. Which is not nearly often enough. And that's just fine with those running the People's Republic of China, a fine example of newspeak itself, for the PRC is scarcely representative of the Chinese people, not a republic except in fake name, and it still doesn't encompass all of China -- for the island of Taiwan remains free, and a real republic to boot, as in its formal name, Republic of China.


Then there are subjugated colonies like Tibet, a troubled province or two like Xinjiang, and, of course, formally acquired but still informally resisting Hong Kong. Uneasy lies the head that wears a commissar's cap.


You might also call Gao Zhisheng a zek, which was Aleksandr Solzhenitsyn's prison shorthand for an inmate of the extensive Gulag Archipelago in the old Soviet Union, where he spent years committing his masterpieces to memory before they could be published -- and astonish the world, which would stand in awe. For here was a soul who refused to bow the knee, bend low and worship this ideological idol.


As for Gao Zhisheng, he has been reduced to a ghostlike figure with few if any identifying marks. Like the usual 15 minutes of fame, or maybe just five in his case, whenever he was nominated again for a Nobel Peace Prize. (He would be one of the rare nominees who actually deserved one.)


On his release from a labor camp, the 50-year-old Gao had been reduced to a Chinese version of Winston Smith in "1984" after he'd been through Room 101 in the Ministry of Love: emaciated, stooped and stumbling, toothless and almost wordless, a zombie. Welcome to another day in another workers' paradise.


Perhaps I should call him the former Gao Zhisheng in honor of the days when he still had a name instead of a number. That was before he had spent three years in a cramped cell, was denied anything like reading material or human contact, and was fed one (1) slice of bread a day, along with one (1) piece of cabbage.


What had earned him such luxury? As a once prominent lawyer, he had defended the defenseless, spoken up for human rights and simple human dignity, and represented persecuted members of various religious minorities, prominent among them the Falun Gong.


And if all that weren't enough to earn him the attention of a modern police state, just who he is would have been sufficient: a Christian. Christianity is one of the whole encyclopedia of thoughtcrimes that can merit a prison sentence or worse in that vast "people's republic."


Gao Zhisheng could just as well be a Taoist or Buddhist or Confucian, or an adherent of any other variety of oldthink that worships a god other than the State to get such treatment. Let's just say his file is bulging with subversive activities, associations and, worst of all, thoughts.


None of this is new in China, which has seen a long list of scholars and poets, and men of conscience in general, come and, alas, go down through the ages. To recall a few lines from Tu Fu, a poet of the late Tang dynasty:


To myself. Ragged mist settles


In the spreading dusk. Snow scurries


I brood on the uselessness of letters.


Uselessness? So it may seem to an old and much abused sage, and yet, and yet ... In a faraway country where freedom still shines, Tu Fu's poems are still studied centuries after he wrote them. And the name Gao Zhisheng may make the newspapers. On occasion.


Ours is a land once known as the mother of exiles. And now America awaits Gao Zhisheng's arrival, and so does his family, which is already here. If only he can get out someday, somehow. If only his name is not forgotten. Which is why it matters that Americans and free men and women everywhere know who he is, and keep his name alive--