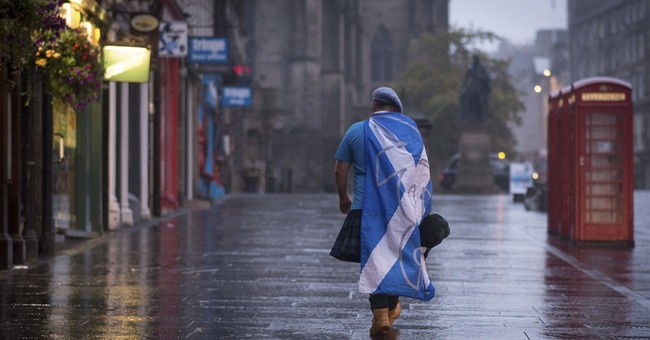 News Bulletin: "Scotland has voted No to independence, after millions of voters took to the polls to decide the future of the United Kingdom."

Some stories still have a happy ending, and this one turned out to be a thriller-chiller. It's as if South Carolina had decided not to secede from the Union in 1860 after all, Sumter was never fired on, and our flag yet waved. What doesn't happen in history, close shaves and all, can be exhilarating, too. The old Union Jack will stay the same, its design unaltered. Just as will Britain.

The morning after this nationalistic binge had ended and the separatist fever had finally broken, Britannia was on the mend. Clio, muse of history, can tell a happy story, too. For tragedy averted makes for a nice little tale even if it lacks the drama of calamity. It turns out that the worst-laid plans of mice and men gang aft agley, too. Thank you, Robbie Burns.

Thursday's referendum wasn't just good news in Scotland and the rest of a still united United Kingdom. Let's hope it's an augury of peace and union for other locales with their more than full quota of fanatical separatists -- Wales, Catalonia, Crimea and eastern Ukraine ... all of which have their quite different breakaway movements, fanatical adherents and/or delusionary utopians.

I blame this whole sordid episode in Scotland on Mel Gibson -- yes, the actor-producer who made "Braveheart" and created a worldwide role model out of a minor Scottish rebel, the hapless William Wallace, and left a successful leader like Robert the Bruce to the dusty history books, unread and un-learned from. Even though that Scottish king learned from all, including the legendary spider in his jail cell, who never gave up his work despite one disappointment after another.

What a contrast with our own rich Silicon Valley magnate who proposed to give us not one, not two, not three, not four, not five, but six Californias -- at least till he ran up against nitty-gritty reality, or maybe just the good sense of the common man, and failed to collect enough valid signatures to get his sci-fi scheme on that state's ballot. Talk about a nightmare in sextuplicate: Six (6) Californias -- as if one big sprawling one were not Future Shock enough, setting off super-sized ripples throughout the rest of this still one nation indivisible.

It turns out that a sovereign state with a history and make-up and strange polyglot character all its own is not some kind of computer program a rich guy sitting alone in his office can redesign at his leisure when he doesn't have enough to do.

Happily, despite all the scary polls, the voting results in Scotland weren't even close: "The vote was split 55.3 to 44.7 percent, with 28 out of the 32 council areas voting No and four voting Yes. Turnout was a huge 84.6 percent." --Daily Mirror.

True to their stereotype, the Scots turned out to be hard-headed realists after all, thank history. Tartans, bagpipes, Auld Lang Syne and all that are very well at a Scottish festival, but the Scots themselves were not about to get carried away by a flighty scheme that would have had untold repercussions in real life.

Happy as this ending was, let's hope it's not the end of the story. For there is still work to be done in both Edinburgh and Westminster, where this vote should be a wake-up call for a largely lazy and indifferent British establishment, which almost let Britain itself slip through its bumbling fingers.

It's time -- past time, for it was almost too late -- to meet Scottish grievances and build a more perfect union. Take it from another once subject people, we Americans, who wish our British cousins well. Or as Edmund Burke observed at a time when American grievances had been too long ignored by an uncaring British parliament, "great empires and little minds go ill together."

In many ways we're still the same people on both sides of the Atlantic even if we may be divided by a common language. So cheers, keep smiling, thumbs up and all that, mates.