The Lessons of Ferguson -- and Cincinnati 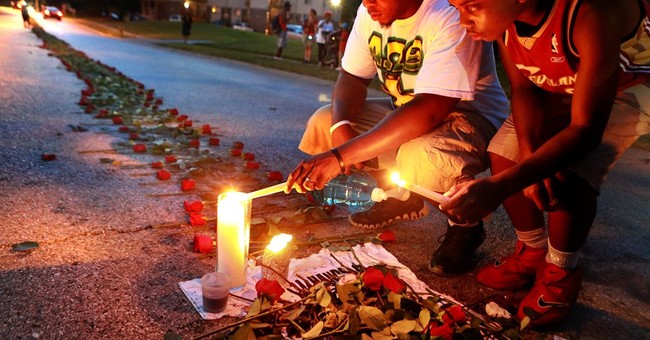 What a surfeit of surreal scenes have been pouring out of little Ferguson, Missouri, these past few weeks -- as if they'd never end. Amazing. Some of us couldn't stop watching the unending spectacle, painful as it was. Goethe said it: "There is nothing more frightful than ignorance in action." Or more mesmerizing. Was this thing ever going to end? It didn't look like it for a while there, as if there were an endless supply of bad decisions in and around that once ordinary suburb. Goodness, what a little town and what big, even national and international news it was making. And none of it welcome.

Little old Ferguson (Pop, 21,203) was a big story and rightly so, since all concerned -- whether in law enforcement or out, whether inside agitators or outside -- kept providing the rest of us with one example after another of atrocious judgment and worse behavior.

Can there be anything, anything at all, to be learned from this big and ever continuing story besides how not to react to a crisis?

Yes. A number of things. Together they comprise a kind of step-by-step guide -- a primer -- on how to keep your town from becoming the next Ferguson or, if it does, how to contain and even reverse all the mischief so plainly out of control there.

Such a guide has been sorely needed. Remember all the troubles of the tumultuous Sixties and Seventies in this country? Back then all of urban (and not so urban) America looked like Ferguson writ large. Some of those troubles kept coming back over the following decades. But some cities actually learned from them.

Cincinnati, for example. It's not easy now to recall the days when Cincinnati was making the kind of jarring headlines that Ferguson has just done. Yes, Cincinnati -- long one of the most civilized of American cities, an outpost of German order and Kultur in the American Midwest. A center of all-American freedom, enterprise and civic pride. Home of the Tafts, various religious orders and seminaries, and rousing band music. Also the classical kind. (Did I say it was a town with a German heritage? As in Bach and Mozart?) Back before what Southerners call The War, on crossing over the Ohio to Cincinnati and free soil, the boatman would yell out: "You are now approaching the American shore!"

And yet, not all that long ago, Cincinnati was facing the worst kind of trouble a city can have. For on a Saturday night back in 2001, an unarmed black teenager, 19-year-old Timothy Thomas, was shot and killed by a white policeman, Stephen Roach, and within days all hell would break loose. It would take years -- and a lot of wisdom, patience and humility -- to put Cincinnati back together again, let alone create a new and even better Cincinnati. How did they do that?

The rest of us are indebted to Peter Bronson, former editorial page editor of the Cincinnati Enquirer, for summarizing how his town made its way back from chaos, and in so doing gave the rest of us a point-by-point guide for future reference:

1. Tell the public everything immediately. In Cincinnati, the cops had nothing to say about the shooting for days afterward. And official silence is an invitation to doubt and distrust.

2. Set the record straight. Don't let an out-of-control media spread falsehoods and general hysteria, which is what happened in Cincinnati back in the early 2000s.

3. Don't crucify the cops. Those in Cincinnati exercised heroic restraint and risked their lives every night all night to restore calm after riots struck that city. In the midst of all that, they were being badmouthed left, right and center.

As in Ferguson, an innocent observer would have good reason to wonder: What ever happened to letting the law take its course, due process, being considered innocent until proven guilty, and all such time-tested principles? A crisis is the worst time to give up the rule of law, and substitute a lynch mob for a legal system.

4. Don't let the feds make a bad problem worse. To quote Editor Bronson: "After the Cincinnati riots, the Justice Department tried to bully the cops into admitting civil-rights violations, but it failed." And a good thing it did, for the Justice Department needs to respect justice. (Copy to the Hon. Eric Holder of Fast and Furious fame.)

5. Repudiate race-baiters. That's good advice, too. "Many agitators," to quote Mr. Bronson again, "came to Cincinnati to loot and riot. The ones in suits were no better. As in Ferguson today, they exploited the crisis for power, press and profit." Just as poor Ferguson now has attracted the attention of professional race hustlers like Al Sharpton, who has been a notorious figure since the riots in Crown Heights and the Tawana Brawley case were making headlines. He was at the center of both, and clearly still loves to be the center of attention. When the Reverend Mr. Sharpton comes to a town, it's the way an old vaudevillian never tires of repeating the same old shtick in hopes of attracting a new audience. No matter how faded they -- or he -- may be.

In the end, it took years to put Cincinnati back together again. Step by step. That city reformed its police department. Completely. It held public meetings at which good will was shown by all concerned. It elected a new mayor, a black man who in turn appointed the first black police chief in Cincinnati's history. By 2008, almost a decade after the riots there, Cincinnati was playing host to the NAACP's national convention. Now it's once again the Cincinnati we've long admired and enjoyed. Who says we all can't do better? And that includes your town and mine, too.