Try It, You'll Like It, Or: Economics for Beginners 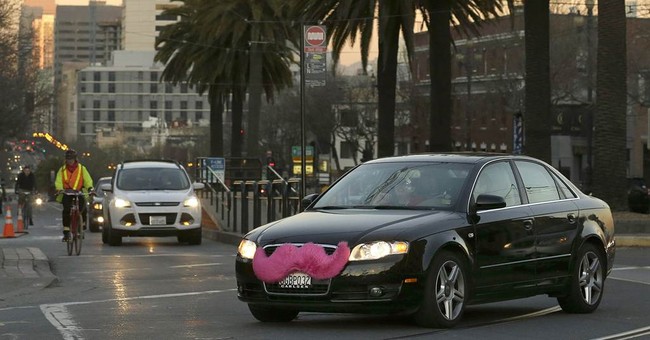 Do you like convenience, service, simplicity, competition, more jobs and all the other features of a free market that stays free and ever productive?

Then you'll love a service like Uber or Lyft, which use private drivers to give customers a, yes, lyft. No waiting forever, just door-to-door or even corner-to-corner service. Provided by friendly folks who use their own cars and stand to collect the lion's share of the fares, the worker being worthy of his hire. Who wouldn't like it? It's good for the customer, good for the driver, and good for the local economy.

Here's who wouldn't like it: the kind of vested interests, like cab companies, who long ago formed a cozy relationship with local government to keep any competition out by imposing a whole web of onerous rules and regulations that mainly benefit themselves.

It was Jonathan Swift who observed long ago, "When a true genius appears, you can know him by this sign: that all the dunces are in a confederacy against him." In the same way, you can spot a true -- and useful -- innovation in the economy by this sign: that all the vested interests form a confederacy of monopolists against it. Which is how a dynamic system like capitalism becomes encrusted with special privileges and inefficient bottlenecks that make it anything but dynamic.

That's how the economic powers that be, and that are determined to stay, substitute government-issue paralysis for capitalism's usual cycle of destruction and creation, which an Austrian (and later American) economist named Joseph Schumpeter (1883-1950) labeled Creative Destruction -- a process that continues to alarm those opposed to both the creativity and the necessary destruction that leads to it.

How stop that never-ending process? Simple. All the vested interests need do is ally themselves with the kind of compliant politicos who impose all those rules and regs. This unholy alliance has come to be known in our time as crony capitalism, which is a lot more crony than capitalism.

Naturally creative outfits like Uber and Lyft keep running into the same wall of vested interests in city after city -- like Little Rock, Ark., this week. Which is why its city attorney has been writing lawyer-letters to both companies demanding that they cease and desist their subversive attempt to practice free enterprise. And he's waving the law in their faces -- the kind of law imposed by local politicians all too willing to do crony capitalism's bidding -- local politicians like Joan Adcock on Little Rock's city council. Alderwoman Adcock sounds much disturbed by these ominous signs that free enterprise is breaking out in Little Rock's comfortably closed market for cab rides. Let ordinary citizens use their apps to summon a ride quickly, conveniently, efficiently and economically, and where will it all end?

The alderwoman can provide a limitless supply of doomsday visions. She foresees a horde of unqualified drivers, or worse, invading the public streets. Let free enterprise get a foot inside this door and the public safety will be at risk, unlicensed drivers will run rampant, and the sky will fall.

Anybody who's ever used a service like Uber or Lyft elsewhere, or just glanced at those operations' actual policies, knows better. As a spokesman for Uber points out, the company does extensive background checks before accepting drivers, provides liability coverage, and is careful to screen those offering drives.

To see how such operations really work, Alderwoman Adcock might try one -- like Lyft in San Francisco -- and experience the ease, economy and convenience of it for herself. Try it, and I bet she'd like it.

And here's one more factor for the alderwoman and Little Rock's other city fathers/mothers to consider: When a new enterprise enters the economic picture, it may not so much supplant older, established companies as supplement them, for it could offer a different range or level of service. And the customer base for both old and new businesses could grow.

As usual when competition enters the picture, both old and new enterprises benefit by learning from each other, and the whole industry improves. Whether the stultifying monopoly is in public transportation or public education, the effect of such a stranglehold can be equally paralyzing, and its being broken can prove just as energizing.