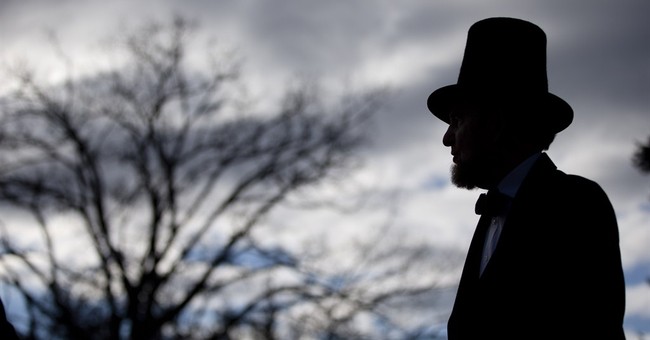 Actions, they say, speak louder than words, and they have a point -- up to a point. But what if the words are so apt and enduring, so altogether fitting and proper, so well-timed yet timeless, that they become deeds themselves, outlasting what they commemorate?

Consider the words of the Declaration of Independence, so familiar that generations of Americans, and not only Americans, have embedded them not just in their minds but spirit. So that by now we hold it self-evident that "all men are created equal...."

Those words are so much a part of being American that we may have to be reminded that there was a time when they were new, startling, audacious. And had not yet become something between cliché and holy writ. Something like a moral imperative. The words of the Declaration aren't just words; they impel, indeed compel, actions. Ideas have consequences. Those words certainly have had.

Then consider that, when those fateful words were first proclaimed, the continental army had already been in the field for more than a year. The revolution that the Declaration announced had experienced more than one victory and defeat, advance and retreat, battle after battle. These colonies may not have realized it, but they had already become these united states.

In the course of human events, this new nation would now dissolve the political bands that had connected it with another, and assume among the powers of the earth the separate and equal station to which the Laws of Nature and of Nature's God entitled it.

But not until the words were uttered had the deed been completed, and the revolution recognized for what it was. Till then, those who had taken up arms had been colonials fighting for their rights as Englishmen, but after July 4, 1776, they were fighting as Americans, no longer subjects of the Crown but patriots fighting for their own country. The words had become the deed.

Seven score and 10 years ago, that still new nation conceived in liberty and dedicated to the proposition that all men are created equal found itself in the midst of a tragic struggle to determine whether that nation, or any nation so conceived and so dedicated, could long endure. Not until the country had undergone a second trial by fire, a war even greater and more terrible than the first, would the fate of the nation be determined.

What was the cause of that awful conflict? Why were Americans now fighting each other? Some said it was over different interpretations of the original Constitution: Were these sovereign states, or was their Union supreme? That question had engaged the country's leading statesmen and political theorists for decades, through one futile Great Compromise after another. But something deep in the American soul understood that men were now fighting and dying for more than a political theory.

Then what was The War about? Some said it was over the peculiar institution in the part of the Union that had separated itself from the rest, the part that stretched from Virginia to Texas, and that institution was human slavery.

But how many Southerners had rallied to the new flag because they wished to keep others enslaved? No, there had to be something more profound and less self-serving than that to explain the birth of a nation.

As the war proceeded, one bloody and momentous battle after another, it became apparent what Southerners were really fighting for -- to repel what they had come to see as an invasion. They were fighting for their land, for their home and their vision of it -- for a nation bound together by what had always bound nations together: a common history and heritage, a shared vision of the past and future. In short, the old European definition of nationality: a bond of blood and iron, Bismarck called it.

When the rebel yell rose across the battlefield, like a mounting roar from a thousand advancing hearts, there was no doubt what united Virginians and Texans and all the rest, and what they were fighting for: The South! The South! The South! And not just some abstract vision of the South but the reality of it, as real and fecund as the green, ever forgiving land itself.

Then there were those on the other side of this awful conflict. Were those who had risen to save the Union defending only some abstract constitutional doctrine about the nature of the Union? Is that why they had responded in overwhelming numbers when a president issued his call for troops and, even more impressive, had persevered in the face of one defeat after another? Just to make a constitutional point?

Or had they come to see that this is not a nation like all other nations, one based on ethnic identity, but on an idea? The idea that all men are created equal. That singular idea would make all the difference, and America exceptional. And why in the end one nation would die in birth, and another be reborn in freedom.

Long before he was president, Abraham Lincoln had pondered, in quiet solitude and clamorous debates, why Americans were so dedicated to their vision of one nation under God. Why were we so entranced by freedom, and so determined to resist what seemed the inevitable spread of slavery across the whole continent? A hundred and fifty years ago this week, at a place called Gettysburg, Mr. Lincoln would answer that question in only 272 words that compressed a lifetime of thought -- words that will live as long as does government of the people, by the people, and for the people. Call it the American Idea.