And The Winner Is ... Alice Munro! 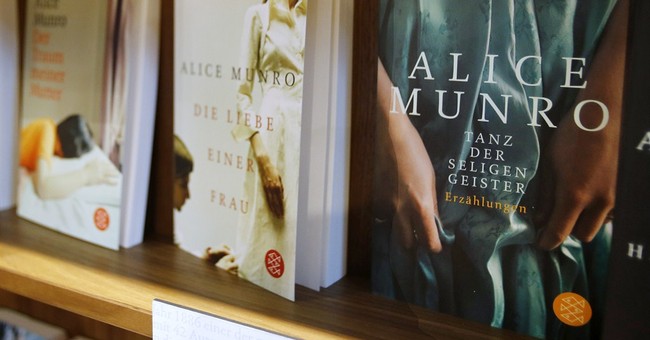 "I would really hope this would make people see the short story as an important art, not just something you played around with until you got a novel."
--Alice Munro
Nobel Laureate for Literature, 2013

Alice Munro, a forgiving and understanding sort, like the best of persons and writers, would surely be kind enough to overlook that exclamation mark in the headline over this column, even if her short stories are the kind that might never use one. British Reserve and all that. It's been said that people who use exclamation points are like those who laugh at their own jokes. Not done. Certainly not by a proper Canadian (if that phrase isn't a tautology) like this new Nobel laureate, whose short stories rival those of John Cheever in quality though quite different in character. They're kinder, gentler, full of sympathy and identification with their characters and with the human condition, specifically the middle-class variety thereof. Which somehow makes her prose all the more devastating, like being resigned to the way we are without ever being subdued by it. Her fiction is one more testament to what a piece of work is man -- and woman.

The news that Alice Munro had been awarded the Nobel Prize for literature almost restores one's faith in that prestigious award, so regularly more prestigious than deserved. And so often bestowed for purely political reasons.

This year's Nobel Prize for literature should certainly educate any of us who have been laboring under the delusion that "Canadian writing" is an oxymoron. Canada may be described as a vast land with some of the most beautiful scenery and most boring people in the world, but Alice Munro's short stories shatter that last stereotype. Gently and definitively. All you have to do is read the first sentence of one of her stories and you're sucked in, caught, enthralled, fascinated -- in the most proper, polite, Canadian way, of course.

Now the whole world has recognized Alice Munro. And now, probably like many another fan of her work, I'm both delighted and dismayed -- for here I'd thought that, despite all the acclaim she's received over the years, she was my secret. That's how personal, how familiar, how intimate and understanding her prose can be. It's a little like being a member of the multitudinous Orwell Cult yet convinced we're the only ones who really get him.

Julie Bosman of the New York Times came up with a much better description of Mrs. Munro's talent than the generic, almost perfunctory praise from the Swedish Academy, which chooses each year's laureate for literature. It cited her as "master of the contemporary short story." Which is like describing Rembrandt as an accomplished painter in his time. Julie Bosman knows better. In her news story/analysis, she cited Alice Munro's "modesty and subtle wit," a phrase which comes much closer to the mark.

Alice Munro writes the way any genteel Southern matriarch with a sense of politesse and an eagle eye would talk -- understated and perfect. You'd think Mrs. Munro was one of those ladies in a small town somewhere between Lake Village, Ark., and Biloxi, Miss., who's run the bookstore for years while she was raising three daughters. Which is just what Alice Munro of Clinton, Ontario, did while she was composing her masterpieces, which are short only in length. They're never short in depth.

Mrs. Munro knows that a short story isn't just an abbreviated art form that wants to be a novel when it grows up. She said she'd labored under that delusion for years before realizing the short story has an integrity of its own. No one who knows her work -- or John Cheever's -- will ever make that mistake again.

No writer need ever apologize for a fine short story, though there are innumerable novels published that sorely need apologizing for.

When the people at the Swedish Academy finally tracked her down to give Mrs. Munro the good news, they found her visiting one of her daughters in Victoria, British Columbia, an idealized version of a British seaside town, complete with carefully tended flower gardens and a high tea at the Empress Hotel that would compare to any in Victorian times.

When the press asked her for a comment on her Nobel, she said, among other more than gracious things, that she hoped her award would bring more attention to Canadian writing. As usual, the lady was engaging in understatement. Her work not only redeems a national literature but the short story itself.

It takes only a little imagination to hear Anton Chekhov, the great Russian short-story writer and playwright, beam with satisfaction at this news, and in his always concise fashion, sigh: At last!