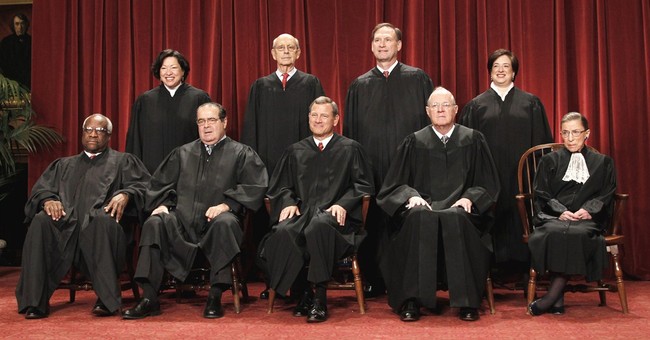 Whether the country will ever again see his like on the Supreme Court now requires a measure of faith. The closest the current collection of justices may come to greatness is a certain egocentricity. Think of Antonin Scalia, who is better known for his sharp repartee in dissent than any philosophy of law. As a judge, he is a great showman.

Justice Scalia's theory of originalism -- that it is possible to divine the intentions of the Founding Fathers at this late date, and then apply them to current case law, is less a philosophy than a bout of nostalgia. And an impressive feat of mindreading, too.

Justice Clarence Thomas' literal-minded reading of the law at least offers some predictability, which is what good law should provide. But his decisions stand out only because of their simple clarity, not any great vision.

The general run of mediocrities who make up the rest of the court would seem dedicated above all to avoiding clarity -- and therefore finality, the one quality that makes such a court indispensable in a constitutional system.

On issue after issue this term, case after case, the court's decisions rang clear as a muffled bell. A number of its rulings left legal scholars and mere newspaper columnists scratching our heads looking for conclusions that weren't there.

The bright, shining exception to this dismal rule was the court's decision to overturn the Voting Rights Act of 1965, or rather bring it up to date. That decision was testimony not to how badly the law had worked, but how well. Because it's evident that the Voting Rights Act has changed the complexion, literally, of the American electorate. It did so by finally recognizing the long-ignored right of American citizens to vote in the states of the Old Confederacy. It was about time this long after The War.

To reach its decision, the court needn't have consulted any law books but only a calendar. Or just look around to realize that the old Voting Rights Act was no longer needed. Indeed, the act had become discriminatory itself -- by imposing burdens on only selected parts of the country.

The rest of the court's docket this term added up to a general muddle. For example, is homosexual marriage in this country now legal? Your guess is as good as mine. Discriminating against homosexuals in federal law would seem to be illegal now, but states that recognize only traditional marriage -- that is, between man and woman, husband and wife -- still may do so. For now.

But a state like California, where voters rejected homosexual marriage, must now recognize it. On the narrow ground that its governor and attorney general refused to defend traditional marriage in court. So a new way has been opened for public officials to defy the people's will: Just dodge their duty to defend their state's laws.

The original impetus for the federal Defense of Marriage Act (DOMA) was to keep states that didn't recognize homosexual marriage from being forced to accept it. That part of DOMA, the key part, still stands. For now. But for who knows how long? With this court, nothing is clear and therefore nothing is final. Or even clearly settled just now.

The court also decided not to decide whether colleges and universities could go on discriminating against better qualified students in deciding whom to admit -- in the name of fighting discrimination, of course.

The first mistake, the original sin, in this long history of injustice was the court's approving schools' decision to combat racial preferences by adopting more racial preferences, this time in favor of the other race. Reverse Discrimination, it used to be called. Though it requires only a cursory glance at such policies to realize they're just the same old discrimination -- only with the colors reversed.

In this case, too, Mr. Justice Thomas offered some rare clarity. Plus a brief history of all the hollow rationalizations for American racism over the years and centuries -- slavery, racial segregation, and now the quota system called Affirmative Action. All were said to be for the benefit of the minority affected even though they hurt it. Today it is Affirmative Action that leads folks to suspect that its beneficiaries have been unfairly favored. ("So you're a graduate of Harvard Law. An Affirmative Action admission, I assume?")

Unfortunately, Mr. Justice Thomas' reasoning failed to sway the majority of the court, which once again chose justice delayed and denied over the real thing. Real justice would have been unacceptably clear.

The court's decision on Affirmative Action would better be described as a non-decision. Its approach to these cases, too, might be summed up as To Be Continued.