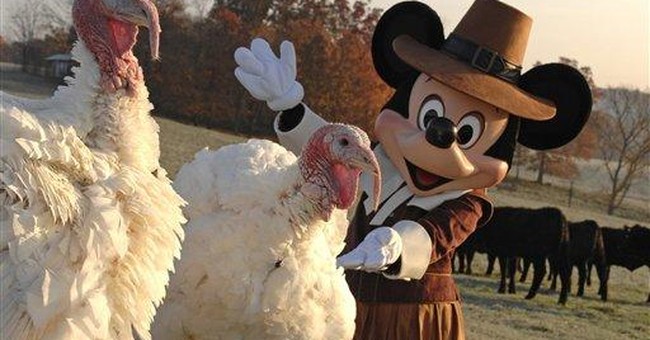 It's the busiest day of the year at the nation's crowded airports. And in many a kitchen. Imagine the hubbub that preceded the first Thanksgiving in American history. As every good Southerner knows, that festive occasion took place not in New England's harsh climes but in beautiful, lush Virginia. To be specific, at the Berkeley Plantation outside Williamsburg on December 4, 1619. You can look it up, as Casey Stengel used to say.

Yet it is the Pilgrim thanksgiving that has shaped our celebration of the holiday. Why is that? Because it is the New England tradition that has dominated the American mythos -- political, literary and religious. From the first, Southerners have been cultural outliers.

The Southern cavaliers may have sought to bequeath their manners to future generations, but the continuing dynamism of American society is largely a product of those stubborn Pilgrims and, later, Puritans. Both made of adversity a blessing, and saw in every twist of fortune a test and, soon enough, a text.

William Bradford's history "Of Plymouth Plantation," a mix of the pious and practical, the inspired and tedious, the clear-eyed and obscure, the obvious and mysterious, remains a latter-day testament -- as mixed an assortment in its way as any Talmudic treatise.

If only the Pilgrims had been a little quicker, and better navigators, they might have made that first Thanksgiving at Berkeley Plantation -- instead of winding up in drafty Massachusetts. With their usual genius for infusing material challenges (and any other kind) with spiritual qualities, the Pilgrims saw in their blunder a providential hand at work.

Rather than curse their luck, the Pilgrims embraced their trials. Which may be why they endured. And prospered. A people who think like that are hard to discourage. They could scarcely glance at a tree, a leaf, a rock without seeing a Sign and Wonder.

When the good times -- namely, bare survival -- finally came to Plymouth Plantation, the Pilgrims wasted no time throwing a bash for some earlier settlers in the neighborhood, Chief Massasoit and 90 of his braves. The newcomers had come through a bleak season and a sea of troubles, and thanks were in order. And what better way to offer thanks than to invite the neighbors over?

It would take decades before the Puritans, who came in the Pilgrims' wake, made Thanksgiving a regularly scheduled holiday. Indeed, there may be nothing more un-Pilgrim than today's fixed day of thanksgiving on a given Thursday every November. Talk about taking divine providence for granted. The presumption of it!

Thanksgiving is now routinely scheduled by presidential proclamation, and put on the calendar well in advance for the convenience of busy travelers. Is that an act of hubris, or of faith? I vote for faith. It's also a tribute to experience. The American Dream isn't just a prospect. Again and again it has been realized.

Hard times, good times, they alternate. But faith persists in the American character. For that reason Thanksgiving may be the most American of holidays. A routine thankfulness is part of the national genius. What we expect, we work for, and thus bring about. It takes grace to remain unapologetic for material wellbeing. Indeed, to expect it. To plan on it.

Faith might be defined as thankfulness in advance. What a strange, unconsciously spiritual achievement Thanksgiving is. Not that Americans can take credit for it. As the poet knew, the land shaped us before we shaped the land. And this bountiful land has made us unafraid of grace, even led us to expect it. On schedule.

It is the Calvinist paradox in practice -- all is fated, yet only a people who work at it can demonstrate the intent of Providence, and prove themselves elect.

It is the day before, the years before, that make any thanksgiving possible. The Pilgrims and Puritans were no believers in cheap grace; it had to be worked for. Diligently. Which is how faith is kept from slipping over into the pride that goeth before a fall.

These 17th-century wanderers did not come to this new world to claim vast estates so they could live off the labor of others. They were Massachusetts men long before they saw Massachusetts. They were New Englanders while still in England. They did not set out to found another colony for the greater glory of an earthly monarch, but thought of themselves as sojourners here below called to found a city on a hill, whose light would shine for all the world to see. They did. It would be called America.

Long before they left old Plymouth to found the new, they had become exiles in spirit -- different in their ways and beliefs and in their concept of themselves. As different as this republic is from the old monarchies of Europe. No wonder this new land would one day be called Mother of Exiles.

That pilgrim spirit, and understanding, still lives in new Americans fleeing old tyrannies. "It's sometimes easy to forget how special America really is," says Marco Rubio, the new senator-elect from Florida. "But I was raised by exiles ... by people who clearly understand how different America is from the rest of the world." Across the span of the centuries, his is the pilgrim spirit. And so is America's.