A Mindset that Must Be Crushed! 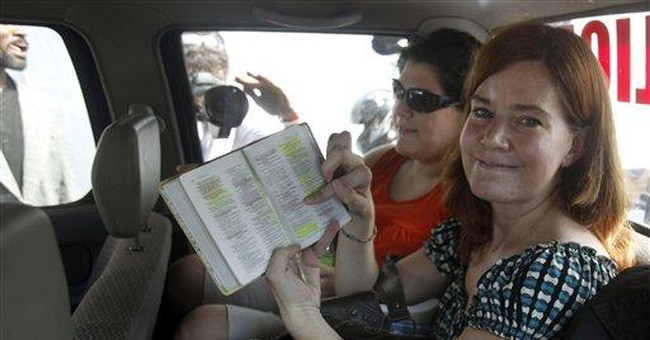 He was one of the Oberlin Mafia, the nickname we gave the succession of bright young reporters who found their way to Arkansas years ago looking for their first reporting jobs. Nice kids, all of them. And almost all of them would go on to successful careers. But, fresh out of Oberlin, some of them still exhibited a few of the ideological tics they'd acquired at that politically correct campus. And they couldn't help but reveal them. Usually when politics was being discussed. As it regularly was.

Even the nicest and best mannered of the bunch, which this young man was, would fall back on certain newspeak phrases when pressed. He astounded me because, though a Yankee, he had beautiful manners. He was from Rochester, N.Y., and I've thought well of that city ever since. You could tell he'd been raised right.

I've mercifully forgotten what hot topic of the day we were discussing at lunch that day. Feminism, then known as Women's Lib? Homosexuality? Vegetarianism? The American League pennant race? It scarcely matters because, on hearing something particularly provocative said on the other side of the issue, he could scarcely contain himself. "That," he exclaimed, "is a mindset that must be crushed!"

The phrase has stuck with me. It is so emblematic of what civil discourse isn't. My young friend was suddenly transformed -- into a forerunner of today's shout shows on television. I could swear his eyes almost gleamed when he shouted the phrase. He could have been Lenin on a soapbox.

But the seizure lasted only a moment before he returned to his more civilized self, smiling a little sheepishly. As if some inner demon had been released.

How strange. We were all newspapermen and, while we might disagree about everything else, the one thing we surely could agree on was the importance of free and open expression. Ideas were meant to be expressed, not suppressed. Isn't that what a free press is all about? Crushing mindsets is not in our job description.

Long years have passed since that revelatory moment, but it comes back to me on occasion. Like whenever the orthodoxy of the moment decides that some ideas may not be expressed. Or at least they must be denied an equal hearing. And an equal footing in the public forum.

Case in sad point: The decision of the U.S. Supreme Court the other day in Christian Legal Society v. Martinez, which concerned a student organization at Hastings Law School, part of the University of California in San Francisco.

To those unacquainted with current ideological fixations, the group's aims might seem wholesome enough -- to discuss the law from a Christian perspective, study the Bible, that sort of thing.

Like so many other groups on that campus, this one sought official recognition -- which would have qualified it for various benefits like the use of the university's buildings, access to e-mail lists, and a share of the student-activity fees the school collects from all its students.

Members of the Christian Legal Society were expected to be, well, Christian -- and to abstain, to quote the group's national charter, from "unrepentant participation in or advocacy of a sexually immoral lifestyle," including "all acts of sexual conduct outside of God's design for marriage between one man and one woman, which acts include fornication, adultery and homosexual conduct."

Gentle Reader can guess what happened next: The university, in accordance with its stated policy that student groups must welcome "all comers," denied the organization official recognition.

Strangely enough, or maybe not so strangely in today's ideological climate, there is no record of any of the other 60 or so student groups on campus being denied official status because they limit their membership to those in sympathy with their aims.

For example, the gay-lesbian organization on campus is free to remove any of its officers who "work against the spirit of the organization's goals and objectives," the pro-life group is allowed to enlist only those who share its views, and so sensibly on.

It's called freedom of association, which has to include the freedom not to associate in order to remain meaningful. For no organization can maintain its integrity if it is forced to open its leadership to those whose ideas and aims may be inimical to its own. Think of the possibilities: A black student association being taken over by skinheads, or the Young Democrats subverted by a well-organized cell of young Republicans.

It will not surprise Gentle Reader to learn that the Christian Legal Society was turned down when it took its case to the courts -- all the way to the U.S. Supreme Court, where it lost a 5-to-4 decision. For its is a mindset that must be crushed! Or at least set apart. All groups may be equal at Hastings but, to borrow another Orwellian construction, some are to be less equal than others.

The great advantage of the separation of church and state is that they are kept, well, separate. But in this instance the state, through the agency of a public university, has arrogated to itself the authority to decide whom the church, as represented by this student religious group, must admit to membership, even leadership.

If the Christian Legal Society is allowed to remain on campus, it must not be on equal terms. It must be set apart, singled out for special treatment, forced to operate under a handicap lest it contaminate the minds of others -- in short, ghettoized. Perhaps the university could design a special yellow badge for its members to wear.

This student organization might consider meeting in the nearest catacombs, for true faith flourishes when it is persecuted, while the kind of faith that renders all to Caesar may find government's embrace more of a stranglehold.