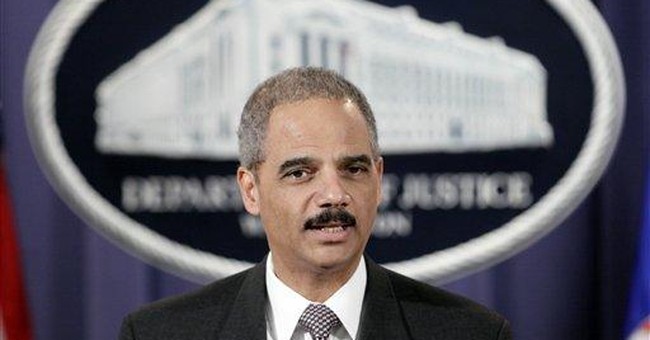 How much time, do you suppose, has Eric Holder spent as attorney general of the United States explaining that he meant no harm by all the harm he's done?

His not very acceptable explanations began even before he was confirmed as attorney general. That's when he was quizzed about his role in approving a pardon for Marc Rich, international fugitive and big giver to various political causes. Mr. Rich was but one of various dubious types Bill Clinton pardoned just before he left the White House, and The Hon. Eric Holder cleared the whole, smelly deal.

Having earned his stripes, Mr. Holder was promoted to attorney general in the next Democratic administration. The other day, he took responsibility for the decision to treat the suspect in the Christmas Day plot to blow up an American airliner as a criminal defendant rather than as an enemy combatant. Even though the president himself has linked the suspect -- one Umar Farouk Abdulmuttallab -- to al-Qaida in Yemen.

The attorney general was at pains last week to explain that none of the other federal agencies charged with protecting the national security had objected to his decision. Of course they didn't. The best way to assure that others won't object to a decision is not to ask them about it in the first place.

Dennis Blair, the national intelligence director, let the cats out of the bag in his congressional testimony: Neither the secretary of homeland security, Janet Napolitano, nor the head of the national counter-terrorism center, Michael Leiter, was consulted before the suspect was given his Miranda warning and allowed to enter the criminal justice system, effectively shielded from questioning by the CIA and/or military intelligence.

To justify his decision, General Holder points out that Richard Reid, the shoe bomber arrested in December of 2001 after he failed to blow up a Paris-to-Miami flight, wasn't turned over to military authorities, either. Instead he was tried in criminal court.

This may be the first time on record that a member of Barack Obama's cabinet has cited the Bush administration as an example to emulate, rather than as an explanation for everything that has gone wrong on its watch. One suspects it won't be the last as this young president and his team continue to learn about the demands of national security on the job. Maybe one day Barack Obama will appoint Dick Cheney his secretary of homeland security and have done with it.

Naturally, the current attorney general felt no need to go into detail, and note that the shoe bomber was taken into custody within a year of the September 11th attacks, well before the current, updated Supreme Court-approved military commissions were in operation. The only sure conclusion to be drawn from Mr. Holder's comparison is that, when desperate for a precedent to justify a hasty decision, even a largely irrelevant one will do.

What a contrast with the sensible position Mr. Holder's boss took when he appeared on "60 Minutes" last spring, when hope in this administration was still high. Here's what Barack Obama said back then about treating terrorists as ordinary criminals: "Do these folks deserve Miranda rights? Do they deserve to be treated like a shoplifter down the block?" The president's response to his own rhetorical question: "Of course not." He needs to tell that to his attorney general.

General Holder seems unaware that his own Justice Department, just days before the plot against Northwest 253 was foiled Christmas Day, had filed a brief justifying the decision to turn another suspected terrorist -- Ahmed Ghailani -- over to the CIA for lengthy interrogation. The aforesaid Mr. Ghailani was arrested in connection with the bombing of American embassies in Kenya and Tanzania in 1998, and has been held since his capture in 2004.

As the Justice Department's brief put it, "the interest in national security plainly justified holding the defendant in this case as an enemy combatant, interrogating him and prosecuting him for violations of the laws of war, even if that meant delaying his criminal trial."

General Holder did not explain why he turned this suspect over to the criminal justice system -- with all the rights, privileges and delays appertaining thereto -- after only 50 minutes of questioning by the FBI. Or why, if military commissions aren't the way to try such defendants, he plans to turn a number of our guests at Guantanamo over to military commissions on the mainland.

Among other excuses for his course in this case, the attorney general offered this defense: "There is no court-approved system currently in place in which suspected terrorists captured inside the United States can be detained and held without access to an attorney."

Mr. Holder's predecessor as attorney general, Michael Mukasey, disagrees. "Holding Abdulmutallab for a time in military custody, regardless of where he is ultimately to be charged, would have been entirely lawful," he points out, "even in the view of the current administration, which has taken the position that it needs no further legislative authority to hold dangerous detainees even for a lengthy period in the United States."

In summary, Eric Holder's rationales for his actions in this case are holding up about as well as those he offered for approving a pardon for Marc Rich.