The Transformation of Barack Obama: Surprise Us, Mr. President 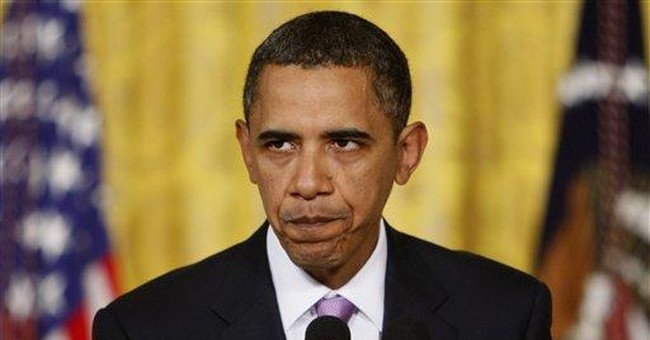 "Nothing is lost save honor." --Jim Fisk

What a difference a year makes. And how differently the country begins to see Barack Obama, the shining hope as a presidential candidate, now that he's President Obama. And acting like any other president who'd rather make the big decisions behind closed doors with only his cronies present.

Oh, for the days of Camelot! Here is Barack Obama in January 2008 promising that his overhaul of the country's health-care system would be worked out in public view -- indeed, on camera. Nossir, these all-important negotiations wouldn't be conducted "behind closed doors, but bringing all parties together, and broadcasting those negotiations on C-SPAN so the American people can see what the choices are." (Applause.)

That promise became a mantra of his campaign, repeated at every whistle stop and photo-op to ever mounting cheers from the suckers. It was one of his most effective applause lines. Naturally it turned out to be only an applause line.

Even good ol' Brian Lamb at C-SPAN (one of the heroes of this often tarnished business) took Barack Obama seriously, committing his network and public service to carrying "all important negotiations" so We the People would have "full public access, through television, to legislation that will affect the lives of every single American."

Sure enough, right on schedule, like an invitation to cynicism, the public is being shut out of the final, most important negotiations between House and Senate conferees on Obamacare. The president's promise of transparency has proven all too transparent. Nancy Pelosi and Harry Reid are running this express train for their president, and it ain't stopping for no public inspections.

What a fraud. But it was a mighty effective one for a while. You have to admire this president's smooth touch even as you see through it. He's even better at this game than Bill Clinton was. Which is saying a lot.

There is a difference, however: People expected more of him. People expected so much of him, he disappoints far more than his predecessors. That's the curse of rising so high so fast; the fall can be deeper and steeper.

Barack Obama came into the Oval Office having won a measure of faith almost unprecedented in an American president. But if he loses that trust, his great strength will be gone. Even those of us who never believed he would be as open with the public as he promised to be will be sorry to see him disappoint so many who so believed in him. It doesn't help the country.

Hope. Change. Audacity. Those were the watchwords of the old Barack Obama. It is hard now even to conjure up the memory of that shining figure. Hope and change have become ironic words when used in connection with this president. Audacity remains, but it is being used for more and more dubious purposes, like secrecy in government. Result: The Party of the People, the incarnation of the great god Demos, now ushers in still another Age of Cynicism.

It is the spoilsmen who are in charge now, determined to get while the getting's good -- that is, before the mid-term elections are upon them. Look at all the payoffs made across the board to squeeze Obamacare past the U.S. Senate. If you can stomach the sight.

It's not too late, Mr. President. You can still take Brian Lamb up on his offer. Surprise us cynics, shock us. Just a word from you -- all right, along with a little nudge -- would be enough to keep your word. Open those negotiations, unlock those closed doors, let the people see what's going on. Or do you dare? That audacious you may not be.