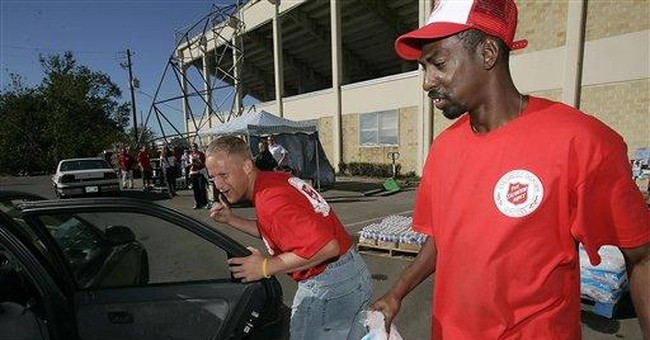 Our work is never done, but now and then your activities up there come to my attention down here in the depths. This time heartiest congratulations are in order. I'm proud of you, nephew. You've been mentioned in dispatches, and I fully intend to put you in for promotion the next time your efficiency report is due.

The killing of that Salvation Army major in little North Little Rock, Ark., by a couple of thugs apparently bent on robbing him would have advanced our cause even if it hadn't so disheartened our enemies. For he was the kind of cheery soul who is always helping others and generally undermining our cause in the best -- or, from our perspective, worst -- way.

"He was a big guy," as one of his friends described him. "A big, old teddy-bear kind of guy." That's the worst combination we can come up against, as you well know. We covered it in Deviltry 101 -- an early lecture on the dangers of a happy spirit. I trust you were paying attention, dear nephew. If not, there'll be hell to pay.

It's one thing to show up some old sourpuss who's always doing good in the most solemn, pompous, grudging way, complete with a long sermon on the faults of the undeserving poor. That's no trick; that type is our best advertisement, for nothing makes evil more attractive than those who do good self-righteously, squeezing every nickel of self-promotion out of their meager gifts to charity.

It's the jolly Santa types that really undermine us. Like this Philip Wise of the Salvation Army. Somebody who goes into tough neighborhoods, ministers to the needy, plays the tuba, loves sports and kids, and generally brings the Good News. That sort is a walking, talking, smiling threat to our satanic Master.

Major Wise never stopped doing the Enemy's work, and when he was gunned down in the presence of his three children, what a testament to the real, inescapable existence of Evil in the world.

The major was just returning to the Army's community center after dropping off a couple of bell-ringers at their homes on the last day of its annual kettle drive. That'll show the skeptics that no good deed goes unpunished. Major Wise had done so many of them over his 15 years with the Salvation Army that we hated to see him coming with his beaming countenance. We knew he was up to good.

It wasn't just his loss but the shocking nature of it, and the anger it set off, that was such a boon to our work up there. All the years of good he had done, all the troubled and hungry he'd offered succor and a second chance, all the desperate families he'd helped, all the hope he'd revived and the grace he'd shared ... all that was obscured for at least a day by the way he died. Good work, Wormwood, or rather bad work. I can think of no greater compliment.

These mortals forget. They may be so taken with the major's loss and the circumstances surrounding it that they forget all the good Philip Wise did in his 40 years. His was a life all should celebrate and be thankful for. Instead, it was the fleeting shadow of evil that captured the headlines for a day. Damnable fine job, Wormwood. I'm proud of you. This is the kind of bad news our demonic fraternity thrives on, not the Good News the major spread. His sort of news just makes my tail curl.

The news about the major's death has spread through the whole state and will make us more cynics than we could ever hope to attract by just irony and wit, a couple of our favorite instruments. Of course those have to be handled with caution. For the other side has its wits, too, and they're blessedly clever. (All the works of G.K. Chesterton should have been banned long ago; instead, we've found a far more effective way to handle him: Just ignore his books.)

This time, Wormwood, old boy, you've pulled off a real coup. You're a credit to all deviltry, and next time you get leave, we must have a cup of fire and brimstone to celebrate. We'll put it on your tab, naturally, at Lucifer's Inn, which never closes.

Here's the problem, nephew. And it hasn't changed a bit since we were both imps. Weeping and wailing may tarry for the night, but joy cometh in the morning. Did you see what the widow Wise, also a Salvation Army major, had to say at the funeral? "I believe I have peace today," she told the mourners, "because I know the work is not done here yet." She said she'd continue to give "hope to the hopeless ... so, together, we will minister to this neighborhood."

These people are dangerous, Wormwood; they never tire of doing good. They are strong as lions, swifter than eagles to do His work, even when we deliver the most crushing of blows. It is at such moments that they show their real strength. Bowed low, they rise up higher than ever. We face a formidable foe, Wormwood, and sometimes I despair -- which is the mood we must inculcate in our victims. They must come to believe resistance is useless.

Instead, someone like Cindy Wise offers unkillable hope and even forgiveness: "I know that deep down I have to forgive them," she said of the killers, "for taking my husband away from me, and that's the way it has to be done -- to forgive them and continue to pray for their salvation."

What's a poor devil to do when faced with that kind of spirit, that kind of faith and determination? Just continue to do what you've been doing, dear Wormwood -- plant doubt, sow cynicism, and surely we will be rewarded with more bad news, the kind that needs to be spread far and wide, accompanied by cries for blood and vengeance. Or even used to make political points. That would be a real boon for our hellish cause.

Burn this letter, Wormwood, lest our confidences be leaked. It's maddening the way some C. S. Lewis type is always sharing my correspondence with the curious. The mortals must never be given an inkling of what we have in store for them in exchange for their pitiable souls; they must be kept ignorant of even having souls.