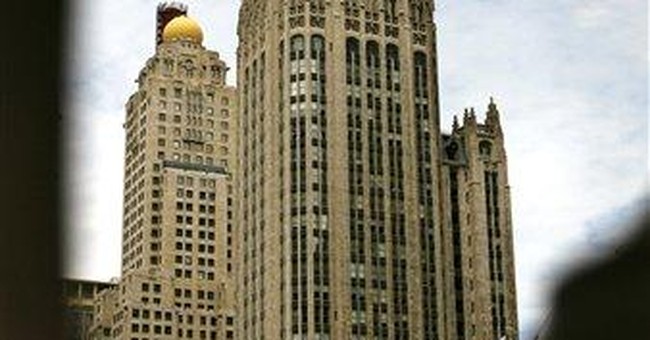 It makes a fellow lonely, not to see the disaster everybody tells me is upon us. It's not easy, being the Last Optimist of the Western World. I do my best, honest I do, to share the pervasive pessimism about the American economy and where it's headed in a handbasket. I feel it's expected of anyone who wants to retain his credentials as a Serious Thinker.

But every time I peer around, sincerely in search of the economic apocalypse that's upon us, all I can discern is just a classic 19th-century financial panic.

Yes, this 21st-century panic will strut and fret its hour (or even year or two) upon the stage, but then it will subside. Like the bust that follows every boom. Though the whole, familiar process would go a lot faster if we had a Federal Reserve System as competent as J. P. Morgan's one-man equivalent thereof in 1907.

What I'm starting to worry about isn't the great worldwide deflation that's supposed to be the big threat on the horizon, but the great inflation sure to come if government keeps spending money it doesn't have, and using the printing press to finance its mounting debt. Or maybe we'll get the worst of both worlds: another Carter Era stagflation, which brought us a two-fer: both stagnant growth and a depreciating currency.

The American economy may have seized up, but the engine is still there. It's not dead, just cooling off. What it may need most just now is a good leaving alone.

This isn't the Great Depression all over again, in large part because of the New Deal reforms that were adopted to deal with it, like federal deposit insurance, Social Security, unemployment insurance and one safeguard after another. If only we had stuck to that wall the New Dealers erected between commercial and investment banking! That way, some banks' speculative investments wouldn't have infected the whole system.

If the New Deal had its failures (see the late and unconstitutional NRA with its price controls and other economic diktats), it also had its successes, which still protect us from the results of our own excesses.

A little more perspective, please, and a little less panic. America isn't done for yet. And neither is capitalism. Though some of the remedies being proposed may only make the patient sicker. Like nationalizing Detroit's Big Three, perhaps as a prelude to making every bank a wholly owned subsidiary of the U.S. government. What a brilliant idea: That way, the economy could be run as efficiently as the U.S. Postal Service. And with all the clarity and simplicity of the Internal Revenue Code, heaven help us.

Here's this week's worst idea/trial balloon from the Obama administration: Convert the government's bailout loans to banks into common stock, making Uncle Sam not just the regulator of banks but their owner. So that the country's largest banks could become public-private corporations, like Fannie Mae and Freddie Mac, and just as capable of creating the next big boom. Which would soon enough trigger the next and even bigger bust. Will we never learn?

The New Deal never made that mistake. FDR saved the banking system by insuring and reconstructing it; he didn't seize it. No wonder our new president has already noticed a "confidence gap" in his administration.

Some enterprises have earned failure. Let them have it. That's what we have Chapter 11 and bankruptcy courts for: to save the assets, pay off the creditors, reorganize those parts of the enterprise worth reorganizing, and get on with business.

I myself hear from a bankruptcy court regularly, the one supervising the Tribune Company's crack-up. I'm a bona fide creditor now, if on a tiny scale, because its syndicate handles my column. But I notice its checks still cash. It's only bankruptcy, not the end of the world.

I've known some cock-eyed optimists who can see nothing but the bright side of things. But at times like these, it occurs that some folks can become intoxicated with pessimism, too. And it makes them advocate precisely the wrong policies.