Talent is the Best Revenge 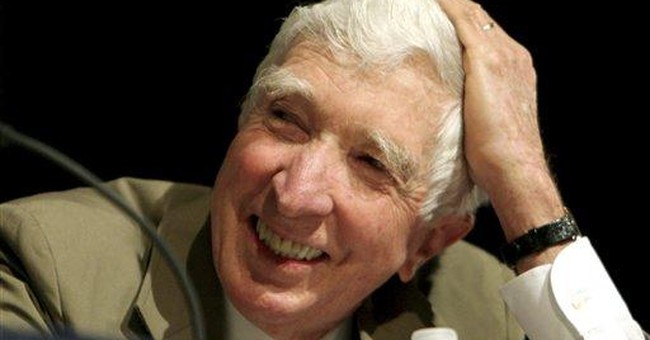 Because of his painter's eye and perfect brush strokes. Because of his sensual delight in ordinary things, which let him show us how extraordinary they were. Perhaps not since Nabokov has there been a writer who so appreciated and apprehended the sheer, lush tastelessness of innocent Americana. Updike's fascination with his time and place and world -- a better word for it might be love -- was just plain irresistible.

John Updike did produce an awful lot of prose in his time, some of it awful. He'd decided early on that he was going to churn out a book a year -- in addition to the mountain of essays and reviews and autobiographical jottings and general ruminations he left behind when he died last week at 76. It's an occupational hazard, the tendency to write more out of habit than calling.

Writing behavior, the shrinks call it.

But when he was good, Updike was just about perfect, in the sense of being a perfect mirror of his time and also of something timeless. And hasn't that been the function of the novel since it succeeded the romance as the literature of the age?

His Rabbit tetralogy, especially "Rabbit, Run," captured not just the spirit of an American in his time, but of America in its. For in Rabbit Angstrom, high school basketball star and now son-in-law at a car dealership, the author drew his American Everyman at 26 -- or at least the 1960 American male version thereof.

Twenty-six used to be the age that marriage, job, fatherhood, maturity and just what's called life closes in like a vise, and the only recurrent thing the captive male can think to do is run, Rabbit, run.

The scene in which Rabbit's alcoholic wife, whom he's deserted again, accidentally drowns their baby girl has to be one of the most harrowing in modern American literature, and, unfortunately, one of the most unforgettable. It haunts some of us still. It is every young father's nightmare of responsibility failed and guilt made life-long. In short, it is the human condition presented in a definite, palpable time and place. A time and place full of Our Kind of People. Maybe that's why, for a certain generation and class, John Updike will always be Our Kind of Writer.

Some of us, despite the eyebrows it raised, thought his sex-drenched "Couples" a great book, too, capturing America when love was dated and The Pill was new. Were we fascinated by the book despite its pornography or because of it, or was it pornography at all? Because the characters weren't just sex objects to be manipulated but as familiar as our contemporaries, and as lost as ourselves.

John Updike could do a lot more than write a great novel, which heavens knows is more than enough. He could pull off just about any writing assignment and regularly did -- surpassingly well. His "Hub Fans Bid Kid Adieu" for The New Yorker about Ted Williams' last game at Fenway in 1960, surely Updike's vintage year if not Mr. Williams', isn't so much sports writing but, like the best sports writing, just writing. It takes flight with its very first words. ("Fenway Park, in Boston, is a lyric little bandbox of a ballpark. Everything is painted green and seems in curiously sharp focus....")

You can taste his enjoyment, share his heightened perception. For John Updike's heart, like any American's, lightened as soon as he went through the turnstile, smelled the hot dogs, and saw colors made vivid and young again as only a ballpark can make them.

This, too, John Hoyer Updike could do: Take himself out of his class and wholly into a character utterly different from himself, as in his hilarious portrait of Henry Bech, his not so fictional New York intellectual, whom he painted not in rivalry but with comic affection. And without a trace of envy. For John Updike had no reason to envy anyone; he had talent, the surest armor against envy.

He was never mean, not really, even when he had to tear some alleged writer to pieces in print for no better reason than that he, or she, richly deserved it -- and was a walking, breathing, published danger to the health of the English language.

Some of us loved John Updike not just for his talent and happiness, but for the critics he attracted. Of course he wrote some bad books, maybe quite a few of them, but the worst of them were terribly flawed masterpieces; none made the least compromise with the mediocrity that covers American life like a dull patina. He would rather have sounded like a fool and failure than have anything to do with the mediocre. It was just not in his artist's being to settle for the average, the lackluster, the safe. Thank God.

John Updike was never a favorite of the intelligentsia, such as America's is, perhaps because he so loved even the unlovely America he wrote about.

That was his unforgivable sin. Next to loving this life itself so much -- which may explain his ceaseless interest in the sexual.

One of his more sophisticated critics, the learned James Wood, once described John Updike as "the least tragic of major writers, and of all theological writers, one of the most complacent. ... For him the world does indeed seem to exist as a divine visual gift, and as a consolation or reassurance, rather than a proof." This seems intended as criticism rather than praise.

That was John Updike's other unforgivable sin: He was at bottom a happy, grateful man. And who would not be happy looking, and really seeing, as he could, this world? He once opined that those who try to prove the existence of God by using the power of reason, however many great minds may have attempted it, are out to climb Mount Olympus by means of ropes and pulleys.

He was not interested in proving the existence or, for that matter, the non-existence of God by mechanical means or ingenious proofs. He was interested only in delighting in His creation, which was Updike's form of never-tiring worship. That was his talent. Let us be thankful for it.