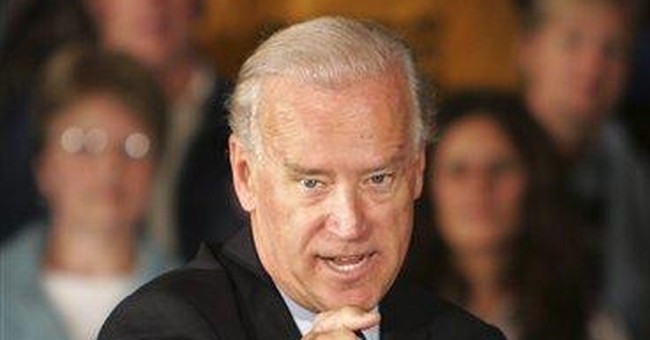 Talk about role reversal: Before their vice-presidential debate, Sarah Palin was supposed to be the airhead and Joe Biden the expert. After she stole the show, it was hard to remember he was even there.

But there were some things Joe Biden said that stuck. Some unbelievable things. There was a point where they came in such a rush I couldn't scribble them down fast enough. So I looked at the transcript later to see if I could possibly have heard right. Unfortunately, I had.

Check out Senator Biden's compact history of why this president has been so completely wrong about the Middle East:

"He insisted on elections on the West Bank, when I said, and others said, and Barack Obama said, ŒBig mistake. Hamas will win. You'll legitimize them.' What happened? Hamas won. When we kicked - along with France, we kicked Hezbollah out of Lebanon - I said and Barack said, ŒMove NATO forces in there. Fill the vacuum, because if you don't know - if you don't, Hezbollah will control it. Now what's happened? Hezbollah is a legitimate part of the government in the country immediately north of Israel. The fact of the matter is, the policy of this administration has been an abject failure."

Huh? What Middle East can Senator Biden have been talking about? The one on Mars? Hamas never won an election on the West Bank; that's the base of the rival Palestinian faction under Abu Abbas, who is still tenuously in control there, thanks to Israeli backing.

France and the United States never kicked Hezbollah out of Lebanon. Can Barack Obama and Joe Biden have ever proposed, out loud, seriously, sending NATO troops into Lebanon? Like NATO would ever go there. It's been hard enough keeping NATO forces in Iraq and Afghanistan.

Didn't we lose enough Marines (220) in that horrendous bomb blast that destroyed their barracks in Beirut back in 1983? Why go back in there?

Can you imagine the fun the mainstream media would have had with Sarah Palin if she had managed to cram so many non-facts into so short a space?

Senator Biden made a number of other strange assertions - he's never at a loss for them - but at least he spaced the others out.

It's not just that some of the things he says aren't right; they're not even wrong. They're just bizarre. But he says them with such assurance, with such easy certainty, with the absolute shamelessness of those who have no idea how off-base they are. There's one in every coffee shop.

Sarah Palin may not know all there is to know about foreign affairs, but at least she knows what she doesn't know.

Senator Biden is a common enough type in American life - someone who strikes the uninformed as well informed. What a poseur. And he gets away with it. He's routinely described in press reports as "knowledgeable." With knowledge like that, you don't need ignorance.

On balance, I prefer the plagiarizing Joe Biden who, back in the '80s, would on occasion borrow the dramatic life story of some British lord and present it as his own. At least he was caught out back then.

The moral of the story: Be on guard every time Joe Biden starts a sentence with "The fact of the matter is..." Because the odds are it isn't.

And this is the Seasoned Veteran of the Senate Foreign Relations Committee who's going to guide Barack Obama through the intricacies of world affairs. Good Lord. Spare us.

Lest we forget, this is the same Joe Biden who opposed Ronald Reagan's policies that ended not only the Cold War but the Soviet Union and the nuclear arms race with it. He opposed the first President Bush's successful war to liberate Kuwait, but supported George W. Bush's decision to go to war in Iraq - until things grew bleak, when he was ready to give up. At that point he proposed vivisecting Iraq into three different countries - as if Sunni and Shi'a could so easily be separated in a country they've shared for centuries. It was a cockamamie idea that might have resulted in the greatest wave of human suffering since India was partitioned in 1947.

Senator Biden (and his running mate) then proceeded to oppose the Surge, the successful strategy that John McCain had been urging for some time, and that now has turned the war in Iraq completely around. Not that Joe Biden is prepared to admit how wrong he was about Iraq. And is.

But he's still capable of surprising me. Before the vice-presidential debate, I thought I couldn't possibly think any less of him.

All of which brings me to one Owen Lippert, a senior staff member of Canada's governing Conservative Party. Or rather he was until the other day, when it was discovered that, in writing a speech a few years back for Prime Minister Stephen Harper, he'd plagiarized one given by Australia's then prime minister, John Howard. Whereupon he had the decency to resign.

Poor Mr. Lippert. It doesn't seem fair. If only he'd been an American, he might have been nominated for vice president of the United States by now.