The Return of a Prophet 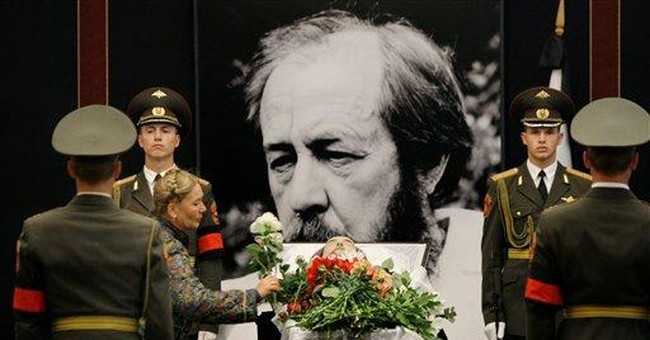 This is an abridged version of a column that originally appeared in 1994, when the Russian author Alexander Solzhenitsyn, who died Sunday at 89, returned to Russia from his long exile.

It's like reading that Tolstoy is touring Soviet Russia to see the Moscow subway and the Gulag. It's like having Dickens arrive in 20th-century England to catch the Beatles.

Alexander Solzhenitsyn has come back to the Big Gulag he left in 1974 (Leonid Brezhnev, secretary-general and chief warden) to find it wide open, flying the old czarist flag and hurling off in all directions. It's as if Ivan Denisovitch, the hero of his classic book about the Gulag, had grown old, free and a stranger in a not quite strange land.

That this climactic return should be seen by so many as anti-climactic - as just another writer going home after his glory days - only adds to the extraordinary ordinariness of a story that could be called "The Return of S." By Gogol, probably.

Neither the Russians nor the world may know quite what to think of Solzhenitsyn, or even want to. He has always been a man out of his time, plodding along the most unexpected paths, remaining obscure when one had expected him to take center stage, only to emerge into the news long after interest in him had waned.

It's a toss-up whether Solzhenitsyn has more grievously offended East or West. The political and cultural elites of both don't know quite how to classify him, even if they pretend to. The reservations routinely attached to their praise rings much louder than the praise. "He was a courageous man, but..." But he's a fascist, an imperialist, a crank, an anti-Semite, an ingrate, an eccentric, a loner, a hater, a nationalist... pick your own snap judgment.

What he is, is his own man. Which is why he got in trouble over there and disappointed over here. He is a great resource, but one that can be tapped only on its own terms. He will always disappoint those who think they can use him to reflect their own, conventional wisdom.

Solzhenitsyn's politics are simple: He hates revolution, having seen its results. He despises ideology and the other savageries of modernity. He loves tradition, stability and time in which to make things, like books and peace.

Because he loves Russia does not mean he hates others. And he can chastise his countrymen as only a lover can. He would have Russia cleanse its air, water and conscience; tend its own garden and rediscover its soul. A familiar messianic vision. Only this time it comes from a prophet unarmed-except with words. Being Solzhenitsyn's words, they were enough to threaten a vast tyranny.

Twenty years before it dawned on many others that freedom cannot have much meaning in a cultural and spiritual vacuum, Solzhenitsyn was being irritatingly candid about the society that had given him refuge - its empty materialism, its mundane obscenity, its substitution of cheap sentimentality for abiding faith, and its worship instead of "imperfect man, who is never free of pride, self-interest, envy, vanity and dozens of other defects."

Solzhenitsyn took especial aim at American society's loss of "civic culture," especially among its "ruling and intellectual elites." And he said these things at Harvard. In short, he wasn't the sort of guest who can be counted on to ignore the peeling paint and cracks in the walls.

It was Solzhenitsyn who wrote in "First Circle" that every real writer is "a second government." Whereupon the usual solemn idiots speculated about his platform, his appointees, his polls, as if he had been referring to the kind of transient power that politicians exert, rather than the transforming power of real words, of a Thoreau or Orwell or, yes, a Solzhenitsyn. Not even the Gulag was ever the same after "One Day in the Life of Ivan Denisovitch." Words change things.