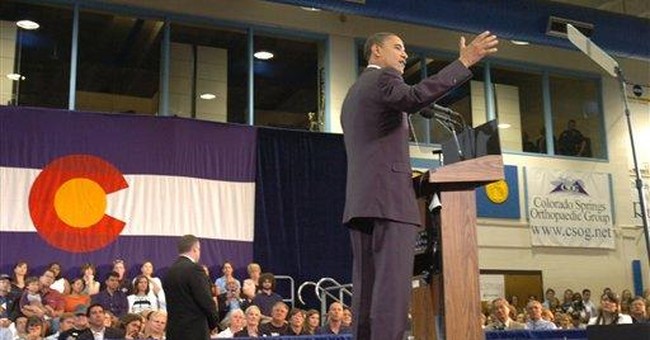 Barack Obama seems to be laboring under the considerable misimpression that this country is engaged not in a war but some kind of criminal investigation.

Sen. Obama maintains that we shouldn’t be holding all those hundreds of detainees in military custody at Guantanamo, among them Khalid Sheik Mohammed, confessed coordinator of the 9/11 attack and murderer of American journalist Daniel Pearl.

What alternative did Sen. Obama propose? Take all the captured enemy combatants at Guantanamo, lawful and/or unlawful, including the hard-core ringleaders who have not only confessed but bragged about their atrocities, and turn them over to the criminal courts of the United States — with all the privileges, rights, appeals, delaying tactics and general obfuscations appertaining thereto.

To quote this young man who would be president of the United States — and commander-in-chief of the country’s armed forces:

“And, you know, let’s take the example of Guantanamo. What we know is that, in previous terrorist attacks — for example, the first attack against the World Trade Center — we were able to arrest those responsible, put them on trial. They are currently in U.S. prisons, incapacitated.”

How simple. And simplistic. It may be too much to hope for, but the senator would do well to have a nice, long sit-down with Andrew C. McCarthy, the former assistant U.S. Attorney for the Southern District of New York. He was the chief prosecutor in the trial Barack Obama now cites as a model of how to conduct this war. Excuse me, this criminal proceeding.

Back in the sleepy year 1993, Mr. McCarthy and the prosecution had to overcome almost insuperable odds to obtain convictions against Omar Abdel Rahman (“The Blind Sheikh”) and the rest of the dirty dozen who attacked the World Trade Center that year — and had planned to follow up the attack by destroying a number of other New York landmarks.

To win his case, Prosecutor McCarthy was obliged to rely not on the laws of war, and what those laws have to say about unlawful combatants out of uniform who attack innocent civilians, but on a superannuated Civil War statute against “seditious conspiracy.”

The prosecution had to overcome inept investigations, legal roadblocks, threats against the judge and jurors and himself, and the widespread lack of recognition in those pre-9/11 days that this was a war, not an isolated crime.

It’s a wonder Counselor McCarthy and his team prevailed in that trial, which consumed some two years and immense effort before the defendants were finally convicted of a bombing that killed six people and injured 100 more.

Ever since that trial and ordeal, Andrew C. McCarthy has been arguing against handling the terrorist threat facing this country and the rest of the civilized world as the kind of ordinary criminal case that Sen. Obama confuses it with.

Magazines, books, forums, speeches and interviews … Mr. McCarthy has employed them all to warn that relying on civilian courts to do what military courts should endangers us all.

Lest we forget, that first criminal trial didn’t incapacitate the enemy. On the contrary, al-Qaida conducted a second attack and then the third, final, coordinated assault of September 11, 2001, that would finally topple the Twin Towers, kill thousands, and strike the Pentagon, too. It would prove the most devastating attack on American soil since Pearl Harbor. Some incapacitation.

To quote Counselor McCarthy: “In the eight years between the World Trade Center’s (first) bombing and its destruction, the high-profile court cases that constituted the Clinton administration’s counter-terrorism strategy resulted in the convictions of exactly 29 terrorists.”

Twenty-nine. When by the count of the Clinton administration’s OWN Richard Clarke, who was supposed to be in charge of protecting this country against terrorist acts, there were at the time “perhaps over 10,000 terrorists” being trained “at the camps in Afghanistan” alone. Some incapacitation.

And this is the “strategy” Barack Obama would return to as commander-in-chief of the armed forces of the United States. Probable result: Hundreds, if not thousands, of courtroom endurance tests as zany as the nigh-endless trial of Zacarias Moussaoui, the so-called 20th hijacker. That spectacle went on approximately forever before his life was spared. Welcome to Barack Obama’s world, or maybe Lewis Carroll’s.

They say this young senator from Illinois has a sharp learning curve. Lord knows he’ll need it if he becomes the 44th president of the United States; certainly the country would.

Recommended reading: “Willful Blindness: A Memoir of the Jihad” by Andrew C. McCarthy.